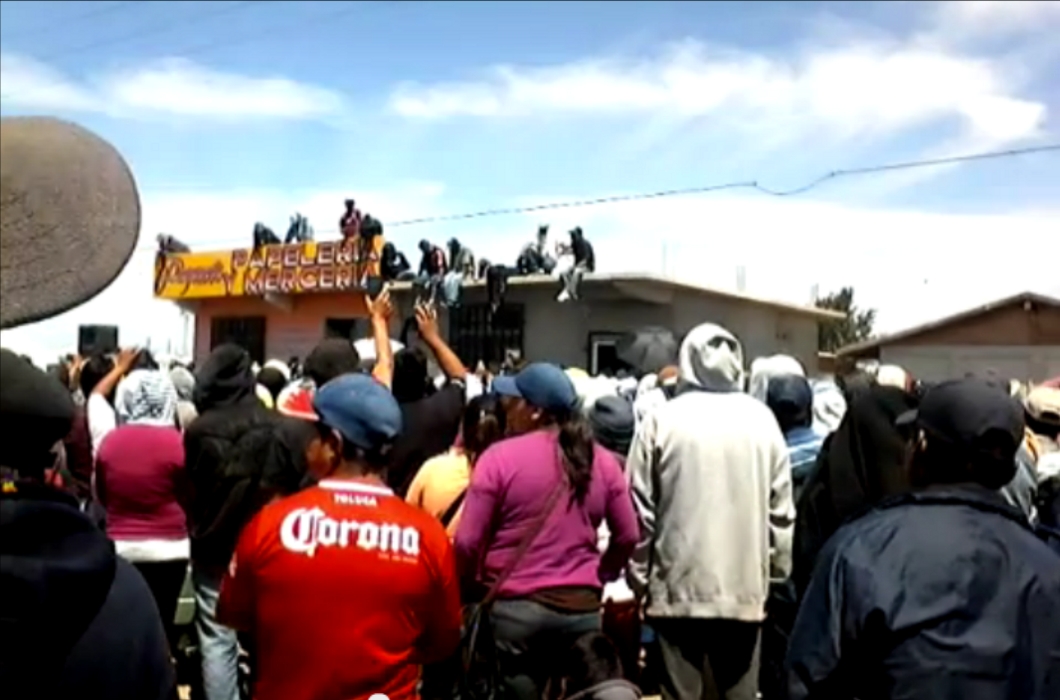 Farmworkers listen as strike leaders read off the 13-point agreement that came out of negotiations with government officials. (Screenshot of video from YouTube user, Miguel Lopez)

Farmworkers at export-oriented megafarms in northwestern Mexico have secured a tentative victory in their two-month-long strike. Shannon Young has more.

Thousands of farmworkers gathered under the open sky in Mexico’s San Quintin Valley as strike representatives read from a rooftop the 13 points of an agreement negotiated with government officials during a marathon meeting that started Wednesday and wrapped up early Thursday.

If implemented, it would significantly improve pay and labor conditions for tens of thousands of the region’s mostly indigenous workforce.

Under the agreement, wages earned by fruit and vegetable pickers would increase to more than $13 a day; double the prevailing pay rates when the strike began in mid-March. Legal recognition would be granted to a new, independent union. The deal also calls for the creation of a registry of farmworkers to better access healthcare benefits that are supposed to be a part of all formal employment in Mexico, a measure some bosses duck by keeping laborers off the books. Other points pertain to improved housing conditions in work camps, eliminating child labor in the fields and the release of detained farmworkers.

The breakthrough meeting occurred after a violent police crackdown in a farmworkers’ neighborhood on May 9th and the threat of an international boycott of brands with suppliers in the San Quintin Valley.

While farmworkers and their supporters celebrate the agreement as a huge step forward after weeks of stagnated talks — it has yet to be finalized. Authorities are scheduled to meet with growers on June 4th.