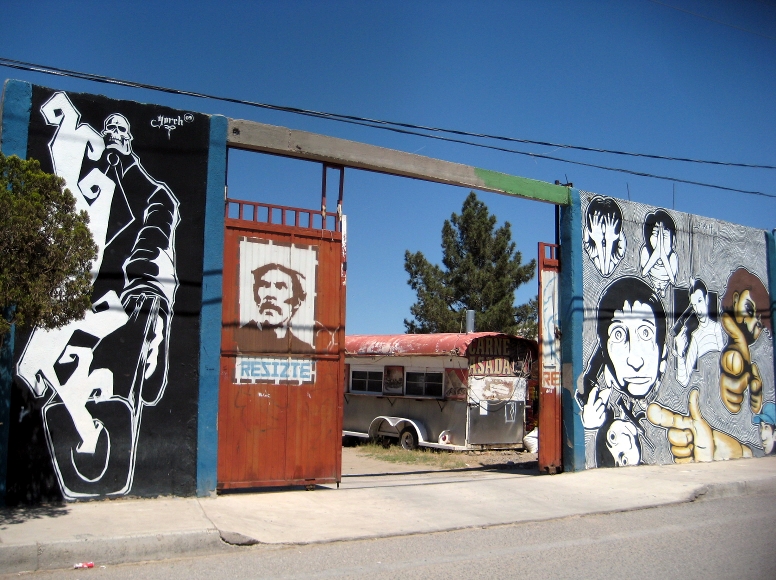 Today, we continue our coverage from the Mexican border city of Ciudad Juárez, which became notorious for drug war violence years ago due to a dramatic, four-year spike in homicides. While the Mexican government threw weight and money behind ambitious, short-term recovery programs, it did not fund initiatives aimed at preventing another spike in violence. In the first part of our series, we looked at community efforts to address the trauma of living through violence. Now, we examine other ways grassroots leaders are using creative energy and the role of arts in the wake of a collective tragedy many residents are still grappling to understand. FSRN’s Shannon Young reports.

Despite its large population and importance as an economic engine and manufacturing hub, Ciudad Juárez has relatively few cultural institutions. The area’s museums number in the single digits and publicly funded centers for the arts are concentrated in the more privileged areas of the city’s massive urban sprawl.

In a shared office at a local university’s sociology department, arts promoter and activist Leobardo Alvarado says Ciudad Juárez suffers from socio-spatial segregation. He points to a series of maps on the wall showing how the most marginalized areas of the city are virtually cut off from cultural opportunities and public spaces, including parks and plazas which can be appropriated for cultural uses. The distance, leisure time, and transportation costs required to get from a poor outlying “colonia” to a cultural event downtown can be demotivating.

But there are other ways of appropriating public space.

Jorge Pérez is a muralist better known as “Yorch”. He’s a part of the ten year old Rezizte art collective and created a series of works around the Salvarcar neighborhood, where he lives.

In 2009 and 2010, he painted a couple of large murals outside of his grandparents’ bakery alluding to the violence and tension racking the city at the time. Yorch says lack of safety during those years forced him and other graffiti artists to keep a low profile and stick to well-known areas.

Yorch was later invited to paint murals with a group of kids in the Palo Chino neighborhood as part of a short-lived, government funded arts initiative.

JORGE “YORCH” PÉREZ: We couldn’t handle the demand. The people in the neighborhood loved it because they didn’t have anything like this type of work there. When they saw the first mural, some women came over and said “I have a wall and it’s all tagged up and I like what you painted here. Can you do something over there?” And we’d go and that woman would tell someone else. We painted the walls of the first people who came to us. We had five places to paint as part of the project but many more wanted us to paint theirs.

Palo Chino is in the western district of Ciudad Juárez known as “El Poniente”, a sprawling labyrinth of hillside neighborhoods and unpaved roads identified by the local university’s cultural mapping project as needing urgent attention.

TERESA ALMADA: The conditions of poverty, abandonment, and violence have remained or are now worse than they were during the bloodshed of the recent past and we find it worrisome that officials are so quick to celebrate without acknowledging that if Juárez went through those experiences, it was in part due to an accumulation of huge vacuums in social rights.

El Poniente has a large youth population, but proportionally few middle and high schools. Institutional abandonment and lack of living wage opportunities have helped to swell the ranks of local street gangs – the entry level into organized crime. Many adult residents work long hours in the foreign-owned assembly plants, while few schools offer extended day programs. CASA is one place where youth can go for afternoon activities.

(Conversations in the hallway at CASA, fade under narration)

Almada says arts and sports programs are always in demand, but there’s also a common need among local youth to be heard, to build friendships and solidarity networks and to receive support for small initiatives they develop within their communities.

Youth-led programs developed around the elements of hip hop have become so popular that CASA built its own recording studio for in-house production of music and CDs.

ERIC PONCE: Rap is a device which provides multiple tools, another language with new words for describing the world in which you live. And not just to describe, but also to act out. Just as a song can transform you into whatever you want, you start acting like it in real life. A lot of kids have used it to work through their processes of grief, which can be very intense.

Ponce references a set of tracks produced by Mera Clase, a rap group in which he and other CASA members participate.

In a song called “Perdón”, a young boy describes the confusion and anger he felt when his father was killed.

ERIC PONCE : ‘Forgiveness is the good guys’ revenge, don’t let that poison destroy you’. Then he says ‘I lost my father, but I invite you to forgive.’

Both Ponce and Almada say the culture of rap is so strong in El Poniente that the hip hop program and events associated with it have attracted at-risk youth into CASA’s other programs – like continuing education and middle school drop-out prevention.

Writer Elpidia García says Ciudad Juárez is witnessing a great cultural explosion as part of a larger catharsis. García herself turned to writing short stories to combat depression after she was laid off from her maquila job of 25 years. She says creative minds in Juárez are trying to make sense of what continues to be a relatively fresh wound in the city’s psyche and that fiction provides a flexible medium for telling stories based on real life experiences.

But like many involved in the Juárez cultural community, García expressed reservations about whether the local administration will commit to long-term programs where they’re most sorely needed.

ELPIDIA GARCIA: So much needs to be done that it can take many years. And hopefully they’ll do it right because what often happens here is that they’ll do something so that it’ll appear in the press and thereby try to convince people – especially investors – of progress. But what’s most important is to get at the root, to those living in poverty, and to the victims most affected by what’s been happening.

The federal government under former president Felipe Calderón, funded recovery efforts in the city which included infrastructure like sports fields and community centers. The program known as “Todos Somos Juárez” received mixed reviews locally and the funding for it ended when the new administration took office in December.

Many cultural initiatives in Juárez survive on grant money or on the backs of committed volunteers. While this falls short of what comprehensive, official violence prevention programs could accomplish, community members say these small-scale efforts do their part to reconstruct the social fabric in what was once the world’s deadliest city.