6,604: This statistic, according to the Argentine Bureau for the Rescue and Accompaniment of Trafficking Victims, represents the number of people that the six-year-old government agency has “saved” as of April 31, 2014. The number is updated periodically, along with a statement highlighting the government’s action to fight the phenomenon that which particularly affects young women.

Now regarded as 21st century slavery by Argentine civil society, human trafficking is not new to the country: Argentina was, in fact, one of the first countries to pass a law against it in the early 20th century. But until recently, the Argentine government paid very little attention to the issue, possibly because the profits of the industry where mostly flowing into the pockets of the police officers and influential Argentinian elites.

Then, Marita Veron disappeared in 2002 and her mother began what would be a decade­-long search for her then­ 22-­year-old daughter. Although Marita remains missing to this day, her mother’s tenacity has forced the Argentine government to take a stand on the problem of human trafficking by drawing national media attention to the issue.

The government has acted at the legislative level by making human trafficking a criminal offense, and building an agency with the singular purpose of finding and rescuing victims. Many new groups have organized prevention meetings and awareness-raising campaigns.

However, some say many victims find themselves on their own shortly after their “rescue” due to inadequate planning and coordination between the agency and NGOs working on the issue of human trafficking. With very few alternatives and little­ to­ no­ support, former victims often quickly fall back into the trafficking network they just escaped.

In Argentina, young people growing up in the suburbs of large cities, where poverty runs rampant, are especially at risk of falling into criminal networks, lured in by the hope of a better life. It is not yet clear if the impunity that has long been the rule can be overcome, as criminal convictions for trafficking offenses remain rare and meaningful social change, difficult.

The following series of photos, taken between September 2013 and February 2014, documents the current form of the fight against trafficking and the ongoing search of parents like Marita Veron to find their missing children. Click on any photo to launch slideshow. 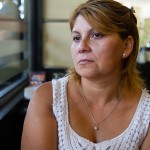 Marta’s daughter, Lourdes, has been missing for almost two years. As Lourdes’s 17th birthday approaches, her mother lives in the hope of being able to find her one day. Marta is convinced that one of her daughter’s friends from their poor Buenos Aires’ neighborhood was responsible for her disappearance. 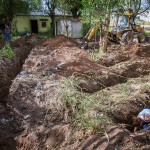 A woman who has been missing for several years was last seen in this former bar-cum-brothel, located on the outskirts of a small town not far from Buenos Aires. Upon the request of a judge, a local NGO searches for her body in the garden. 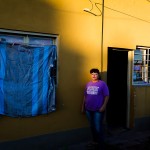 Blanca was abducted when she was a teenager near her home in a suburb of the city of Tucuman. She was drugged, beaten and forced into prostitution for many years until a police operation freed her from her captors. But her years in captivity have left her with serious psychological disorders, memory loss and AIDS. After being diagnosed with AIDS, she says that she was ostracized by her family, children and friends and has had trouble finding work, condemning her to live in poverty. In 2011, the Argentine government banned classified ads “proposing sexual favors” in an attempt to fight sexual exploitation in illegal brothels. Following the ban, brothels began advertising in the street in the form of small squares of paper that now plaster walls, signposts, and trash cans. Groups of people opposing the brothels’ flyering meet weekly in various part of Buenos Aires to remove them. 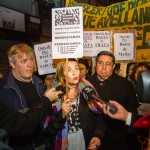 Demonstrators outside a clandestine brothel in Buenos Aires, then-unrecognized by the government as a site of sexual exploitation. The demonstrators belong to a neighborhood association and a textile cooperative called “The Alameda,” which was formed by former clandestine sweatshop workers. The cooperative is very active in the fight against criminal networks and human trafficking. The demonstration was intended to make it impossible for local authorities to claim ignorance about the brothel’s existence and thereby justify their inaction. 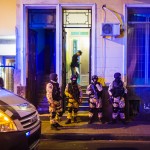 Police intervention at a brothel in Buenos Aires on the orders of a judge who suspected that some the women there were victims of trafficking who had been forced into prostitution. 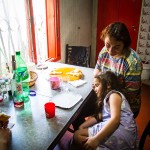 Maria and her family in their home in a suburb of Buenos Aires. Maria’s daughter, Ailen, has been missing for over a year. They suspect that a man who claimed to be her boyfriend took advantage of familial conflict to ensnare her in a prostitution ring. 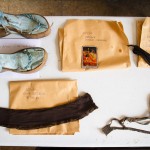 Clothing found during a search of the former brothel just outside the city of Buenos Aires where women were confined and forced into prostitution. 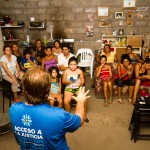 Meeting to raise awareness about and help prevent human trafficking, organized by the government in the suburbs of Tucuman, a city in northwest Argentina. Raising awareness is considered crucial, because many young women fall in criminal networks after being taking in by promises too good to be true or by people who turn out to be involved in trafficking, sometimes even from inside their families. 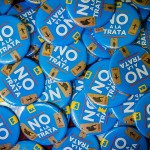 Badges that read “No to trafficking,” which were distributed at a conference on human trafficking that was organized by the city of Buenos Aires.