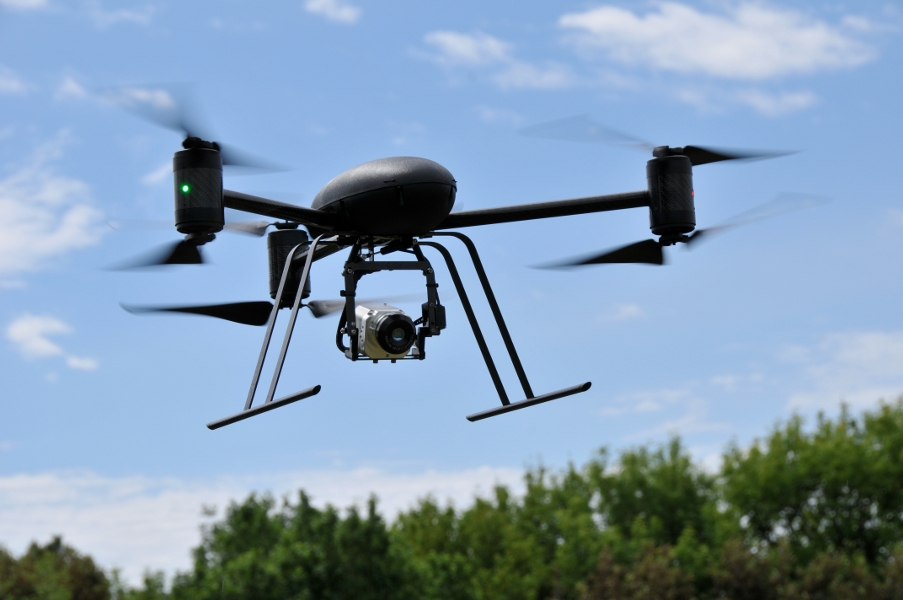 Unmanned aerial vehicles, or drones as they’re more commonly known, have been patrolling U.S. borders for years. But their potential use by local law enforcement has raised questions about the trade-off between cost-effective policing and citizens’ constitutional right to privacy.

Earlier this month the Los Angeles Police Department aquired a pair of Draganflyer X6 UAVs from the Seattle Police Department, which had purchased them using federal grants. The equipment is part of a pilot program and the LAPD says the drones will only be used for tactical events such as manhunts and standoffs. But if LA’s response is similar to Seattle’s, those UAVs could end up as white elephants. FSRN’s Larry Buhl has more from Los Angeles.

As police departments around the country consider adding aerial surveillance technology to their tool kits, civil liberties advocates – and some citizens – want assurances that the technology won’t be used to spy on citizens suspected of no wrongdoing.

“The Los Angeles Police Department will never, ever give up public confidence for a piece of police equipment,” said LAPD Charlie Beck at a press conference announcing the department’s acquisition on the technology. “We are going to thoroughly vet the public’s opinions on the use of aerial surveillance platforms by Los Angeles Police Department before they are ever deployed.” Beck prefers the euphemism “Unmanned Aerial Vehicles” to avoid the association between the department’s new surveillance aircraft and the weaponized systems used abroad by the military and the CIA.

The LAPD’s drones look like toy helicopters. They have a short battery life—only ten minutes—and they can hover no more than 400 feet from the ground. And they carry sophisticated cameras.

The Seattle Police Department bought the mini-drones in 2012 using $80,000 in federal grants. But when residents learned about the program there was pushback, and the Seattle PD mothballed the devices until the LAPD agreed to take them.

Angelinos have good reason to question how and when the UAVs will be used. In 2012 the Los Angeles County Sheriff’s Department tested a surveillance camera mounted on a Cessna plane and flew it over the city of Compton, capturing high-resolution video of everything in a ten-square-mile area. There was an uproar from Compton citizens and community leaders when they learned about the test long after the fact.

Doug Honig, a spokesman for the ACLU of Washington state, says that his concern is not just the capability of today’s UAVs, but how more advanced drone technology could be used… and abused. He warns the domestic surveillance will become increasingly invasive if restrictions aren’t in place: “They’ll have things like high-powered zoom lenses, they’ll be able to use thermal imaging, they’ll be able use radar to look through walls of homes and businesses. They’ll have facial recognition software. All these things will be available to domestic drones. And they’re going to be cheaper because the research is going into it. And the nation’s largest aerospace manufacturers are very interested in developing the domestic drone market.”

The solution, Honing says, is to rigorously vet the technology and put formal guidelines and restrictions on it—right now. Seattle residents pushed back on the police drone program after information about it came out. Privacy advocates say public dialogue needs to begin well before police departments invest in the technology.

Some privacy advocates say electronic police surveillance without a warrant is never acceptable.

Author and activist David Swanson regards this type of surveillance as running counter to due process guarantees. “If a police department says we are going to go through our own vetting process and we are going to be very careful before we spy on someone, what they’re saying is ‘we are going to violate the Constitution, but trust us.’”

Swanson was instrumental in drafting a resolution last year in his hometown of Charlottesville, Virginia, that called for a two-year moratorium on any kind of drone use. Since then, eight other U.S. cities have followed Charlottesville’s lead. Swanson admits some of these resolutions are symbolic only, but the public engagement and dialogue that helped create them is important.

“When you put a camera up in the sky and videotape everything happening on the ground below,” says Swanson “you’re not going to a court and getting a warrant describing what you’re searching for and when and from whom and on what ground and then conducting that narrow search. You are conducting a widespread search of everybody.”

Privacy isn’t the only concern about police drones. Safety has come under question after a couple of police drone crashes in Texas.

The Federal Aviation Agency allows law enforcement to send up drones in urgent situations, like search-and-rescue operations, as long as they have a special “certificate of authorization” but the agency doesn’t require operators to have a special license, or any skills.

The FAA’s 63 billion dollar NextGen upgrade is supposed to address safety issues. NextGen promises to modernize air traffic control systems and allow for remotely-piloted aircraft in civilian airspace, but draft regulations have not yet been made public.

For now, little is stopping local police departments from buying and using UAVs as they please, until and unless citizens learn about it and push back.