No justice for Cambodian garment workers killed while on strike 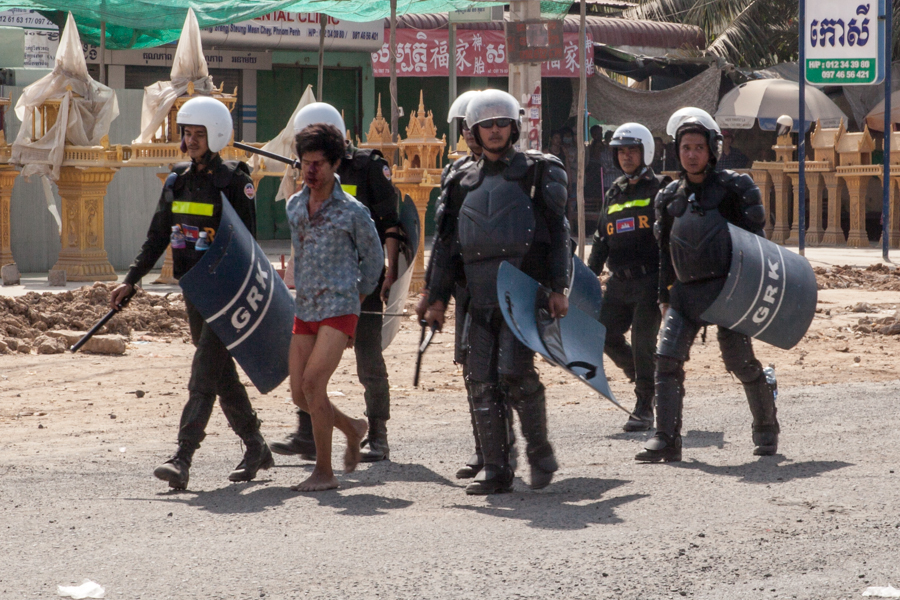 When Cambodian garment workers making clothes for U.S. brands like Walmart, Levis and Puma took to the streets in January demanding to be paid more than $3.00 a day, police and soldiers opened fire. Five people were killed instantly—another worker died this month due to the injuries he sustained. Rebecca Henschke, reporting with Borin Noun, says their families are demanding justice.

Prayers are offered for the soul of 29-year-old Moun Sokhmean at a Buddhist pagoda near Phom Penh. Fellow garment workers and his grieving family are here to say goodbye.

Since he was 17 years old, Moun Sokhmean had worked for $3.00 a day making clothes for international brands. When fellow workers took to the streets in January demanding a pay raise, Sokhmean joined them.

Garment workers recorded the protests from their dorm rooms. The video shows police firing live ammunition directly at hundreds of workers outside the Canadian industrial park in Phnom Pehn.

Five people died at the scene. Moun Sokhmean and forty others workers were badly beaten by riot police.

“My son is an innocent; he did not break any laws or abuse anyone,” says Sokhmean’s father. “His death is a great injustice. I need the United Nations and local and international organizations to find and provide justice for my son.”

The Cambodian government says it has conducted an independent investigation into the violence but has not released its findings. To date, no members of the police or armed forces have been charged for firing on unarmed civilians. No compensation has been given to the injured or the families who lost loved ones.

David Welsh is with the U.S. labor rights group Solidarity Center. He meets regularly with the Cambodian government.

“The government is on record with me at least saying that as far as they are concerned not a dollar is going to be going to any of the families of the deceased,” Welsh says, adding “Or any of the injured. So to get any kind of compensation there is an ongoing process where brands will be asked to put a fund together.”

Ken Loo represents around 550 garment and footwear factories in Cambodia. He says factory owners should not be obliged to pay compensation to the injured or deceased workers’ families.

Instead, he says the Association is planning to demand compensation from the workers unions, saying the industry lost millions of dollars because of the two weeks of protests.

“We are actually the ones who suffered in this whole incident,” according to Loo. “Who is seeking compensation for us? Buyers are not going to be giving us a cent.  It’s unfortunate that the women you spoke to lost her husband, but then was he part of the demonstration?”

Reporter Rebecca Henschke pressed Loo. “He was striking for a better living wage,” reminded Henschke. “He said that he couldn’t live on $100 [per month] and he thought that he would take the chance to as the ILO (International Labor Organization) says to strike. He took the right to strike and was killed.”

“He has the right to strike peacefully,” insists Loo. “He has no right to engage in violence.”

“He did not engage in violence,” Henschke says.

“He walked down the street,” Henschke responds.

“Why was he there?” posits Loo. “If I was a peaceful demonstrator and I see in front of me a few hundreds if not thousands of protestors and on the other hand if I see hundreds of anti-riot police with rifle and if I am not involved am I going stay there? No I am going to get my ass home.”

According to Loo, the garment industry generates 5.5 billion dollars from 600 factories in Cambodia each year. It accounts for well over 80 percent of the country’s export GDP, and is the single largest industry in the country.

But Loo says they can’t afford to raise wages in the factories, because the brands – the buyers – are not willing to pay them more. “Investors are here to make money, investors are not here for charity,” says Loo. “If we make money we stay here. If we don’t make money then, very naturally, they will look at leaving.”

Opposition politician Mu Sochua says the big brands also care about their image. “The blood of the workers tainted on the t-shirts of Gap and on the shoes of Puma and Nike that is hurting these big brands,” Sochua said. “They don’t want to leave Cambodia. In fact, they put pressure on the government to find a solution.”

Recently representatives from several major international brands, including Gap and Puma met with government representatives in Phnom Penh. According to Industrial Global Union, a Switzerland-based labor group that was allowed to observe the talks, some of the brands said they would consider paying higher factory costs if the minimum wage was raised.

At $3.00 a day, Cambodia’s minimum wage is lower than other garment-heavy Asian economies like China, Vietnam and Indonesia.

It’s too late for Moun Sokhmean’s wife, Pok Heab. She says she doesn’t know how she will support their family alone.

“Since he got seriously wounded in January, it has been very difficult to feed my son and life has been very hard,” Heab weeps. “Now that he has gone life is going to get harder, we now very poor.”