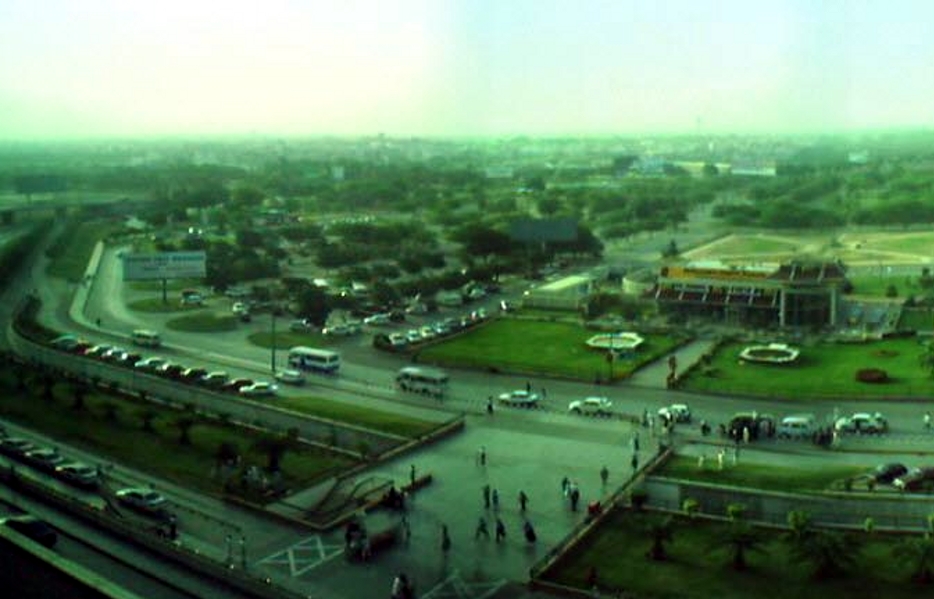 The Pakistani Taliban has claimed responsibility for an attack on the Jinnah International Airport in Karachi, which killed at least 28 people. Gunmen disguised as security forces gained access to the busy airport via the cargo terminal before launching what turned into a five hour standoff. Pakistani security forces regained control of the airport after fatally shooting seven gunmen and after another three attackers detonated suicide belts. A Taliban spokesperson said the attack was a response to drone strikes in the tribal areas along the border with Afghanistan. For more on the story, Shannon Young spoke with FSRN reporter Umar Farooq in Peshawar.

Shannon Young: First, can you give us a rundown of the latest information that’s come out about the attack?

Umar Farooq: Yeah, it looks like a group of militants, ten militants, entered the airport last night around 11pm local time. All of the militants have been killed. Three of them detonated suicide vests and the rest were killed in shootouts. The military took over the airport for a period of time to try to clear it. And then, about 4pm local time today, they handed it back to civilian authorities and the civilian authorities are starting to re-open the airport.

SY: Why is it happening now?

UF: Basically, there’s a military operation that’s about to begin in a region near the Afghanistan border called North Waziristan. It’s sort of the last stronghold of a bunch of different militant groups in Pakistan, including the Tehreek-e-Taliban Pakistan, which is an umbrella group for some Taliban group in Pakistan. And because the military offensive is about to start, the Taliban are sort of activating cells they have in different cities in the country to carry out these attacks to pressure the government as much as they can.

SY: There have been a number of deadly attacks in Karachi over the past few months. And just last week, the US Consulate there issued a travel advisory urging US citizens in the area to exercise caution. Can we expect more attacks like this in the future?

UF: Yeah, definitely. The Taliban themselves have promised more attacks and the Karachi attack is part of a series; there have been several. There were two twin attacks inside the capital, Islamabad, in the last two weeks. There was an attack two days ago that killed two army officers near the capital. There’s been sort of an upswing in attacks and it’s part of a campaign around this military offensive that’s about to take place in North Waziristan. So, people are are just on the edge. They’re sort of waiting for the next attack and wherever it can happen.

SY: What kind of impact will this military offensive have on civilians in the Federally Administered Tribal Areas?

UF: The offensive is going to empty the area of civilians. The government hasn’t yet issued a directive asking for civilians to leave, but local tribal elders had a big meeting last week where they told everyone to leave by June 10th. And the population, it’s about 600,000 people in North Waziristan who are going to have to leave. And a lot of them are going to go over the the Afghanistan side because they have a lot of family in Afghanistan. So, it’s going to have a tremendous impact on civilians. They’re going to be displaced probably for a few years.

This isn’t the type of operation that’s going to take a few weeks or a few months like we’ve seen in some other parts of Pakistan in the last 10 years. Just because that area was such a big hub for militants. It was the place where Al Qaeda was, it was the place where the Pakistani Taliban were, where the Afghan Taliban were. So, it’s going to take a long time for the military to clean that area up and let civilians come back in. So, there’s going to be a large population that’s going to be displaced for a long time.

SY: You mention that many area residents have relatives on the Afghan side of the border, but what about those who don’t? Where do these civilians go? Has the government enacted any kind of emergency response plan to cope with the waves of internally displaced persons?

UF: No, not yet and that’s a really worrying factor for people. The military has actually been carrying out airstrikes and surgical operations for the last month in North Waziristan. But because the government hasn’t declared it a conflict area, no one has been able to set up relief camps. No one has been able to help people evacuate from that area. Aid groups, the United Nations can’t get in there like they normally do and help internally displaced people in Pakistan. So, the government has yet to set up the kind of relief structure that needs to be in place.

SY: How does the threat of more attacks in urban areas affect the mood of city dwellers in Pakistan?  Does it result in opposition to the government’s strategy or more support for it?

UF: There’s a big divide here. Earlier this year, in January and February, the Pakistani government tried negotiating a settlement with the Taliban and that negotiation fell apart because both sides violated the ceasefire. And after those negotiations fell apart, we’ve been talking about this military offensive now for a few months.

So there’s a debate in civil society over whether or not Pakistan should just take an all-out military operation against the Taliban. And then other people saying ‘we won’t be able to win a complete military operation, we need to have some sort of negotiated settlement.’

This last attack in Karachi on the airport has really raised the temperature and the voice of the people who want to push for an all-out military operation has really come to the forefront in the media and in civil society in general.

On the ground in cities, there’s… in Islamabad, the government has deployed these paramilitary troops that ride around in these big trucks and people aren’t really sure if they’re actually causing more problems than they’re helping because they’re sort of giving new targets for militants to fires at. So it’s quite a tense situation.

SY: We will continue to keep an eye on developments. Umar Farooq, thanks for speaking with us today.