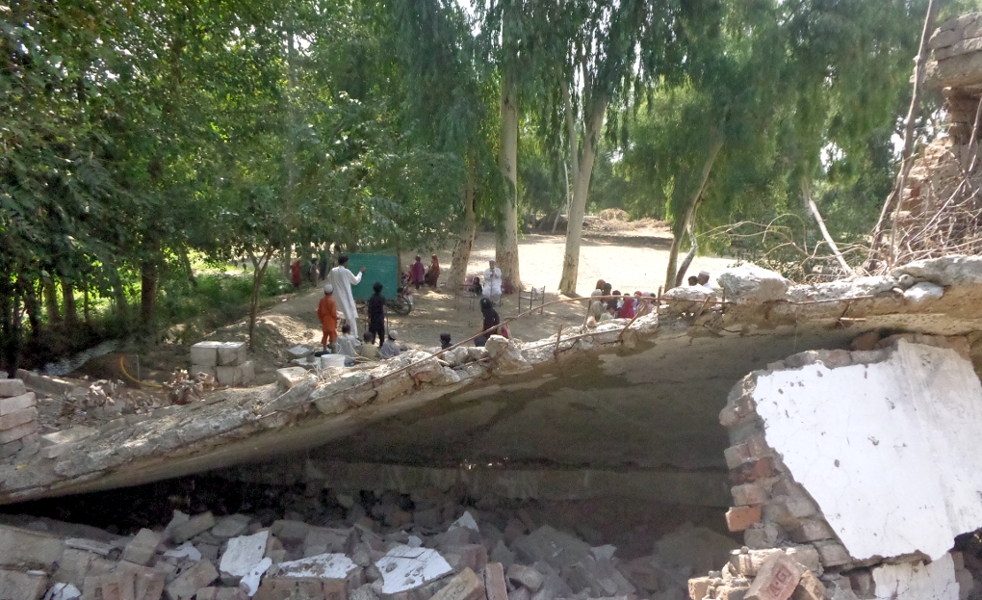 Children take their lessons in the shadow of their bombed-out school in Pakistan. (Photo credit: Fakhar Kakakhel)

This year, Pakistani teen Malala Yusufzai shared the Nobel Peace Prize for her work advocating for education and peace in Pakistan’s Swat Valley. On Wednesday, she was also awarded the World’s Children’s Prize. The recipient is chosen by a global ballot with votes cast only by children. At the award ceremony, Yusufzai said that she will donate the entire $50,000 purse to help rebuild schools in the Gaza Strip.

As a pre-teen, Yusufzai blogged about the dangers, particularly for girls, of seeking an education in the region under Taliban occupation. While aboard a school bus, she was shot in the head by militants in an assassination attempt.

More than three thousand schools have been destroyed in the country during years of Taliban insurgency, and attacks on schools are still happen regularly. Fakhar Kakakhel travels to the Tribal Areas to visit schools and find out how students and educators are faring.

These children are among thousands in Pakistan who’ve lost their school in a bomb blast. According to local authorities, militants have blown up more than three thousand schools in the Pakistani region bordering Afghanistan in the last five years.

But rather than give up on education in the face of threats from Taliban militants, some teachers and students continue to hold classes under the open sky.

Among them is seven-year-old Ayesha – not her real name. A bomb blast in August this year destroyed her school completely. Ayesha is studying English and Urdu and wants to be a teacher when she grows up. While some teachers make a brave attempt to keep offering classes, only the most dedicated students continue their education years after an attack.

Sherzad teaches a small group of students in the remains of a school that was bombed by militants in June of 2011.

“Our school was bombed on the second of June at around 8 o’clock PM,” Sherzad recalls. “The next morning we had no building. None of the children appeared on that day. We waited for weeks to start classes. We’re scared but are thankful that at least the militants are not killing us. We have heard that Japan has sent funding to bombed schools. But we haven’t seen developments. Children are seeking education in an environment of fear and stress. These are really brave students. During harsh weather we have to call off classes.”

Near the town of Shabqadar, a group of teachers from a bombed-out school tried to hold classes in tents. But the next morning Taliban militants set the tents on fire.

“When our school was destroyed, we weren’t surprised,” one teacher, Awai Khan explains. “There are school blasts weekly, if not daily. Since we lost the building and everything in it, we asked the government to provide tents. We also borrowed some chairs, boards and furniture from the neighboring schools. We started our tent school.

“But we and our students were still feeling threatened. Dozens of children dropped out. After three weeks of the tent school in the evening militants stormed the school again, set the tents on fire and left. The next day there was nothing left except ashes. Our school was the only school for the town’s five thousand families. Now few of the children take the risk to attend schools out of town.”

Officials say the destruction of schools is part of the extremist mindset because militants oppose raising awareness through education.

“More than four thousand schools we have lost partially damaged fully damaged and despite of that you know we were facing financial problems due to militancy due to the floods but despite that difficult times we spare enough funds, we have completed in our own government more than sixty percent reconstruction process, we have completed,” Parliamentary Member in the Standing Committee for Education Sardar Hussain Babak says.

“Now operation is going on in Waziristan so definitely it will react here. The militants will definitely continue their militant acts in the whole country in general and in particular in our province also. There is a mindset who are against the education in the Pashtun region and the Pashtun belt. They are against the awareness.”

While the role of the militants in attacks is clear, some would also say the government response lacks commitment, planning and coordination.

“After suicide attacks killed school security guards, I tried my best to continue,” comments Amar Sher, a former teacher at the Subkhan Khwar Government High School, which has survived two suicide attacks and four bomb blasts. “But there are issues at the management level. The international community has sent billions of dollars, but nobody is asking where these dollars went….I stayed on for a while. Believe me there are no records for half of the funds. The school rebuilding efforts in the Federally Administered Tribal Area has become a gift to corrupt local officials. Hundreds of schools have been built in areas where they are not needed. We know the global community has given generously to rebuild schools, but no one is following up to see to see what happens.”

Extremism and corruption have trapped the region’s children in a Catch-22 situation. Education is seen by many as the best way to counter extremism, but the biggest hurdle to rebuilding the region’s devastated education infrastructure is the corruption of local officials.

For now, the education of future generations has become a high-risk endeavor for a small number of brave teachers and students and the parents who support them.