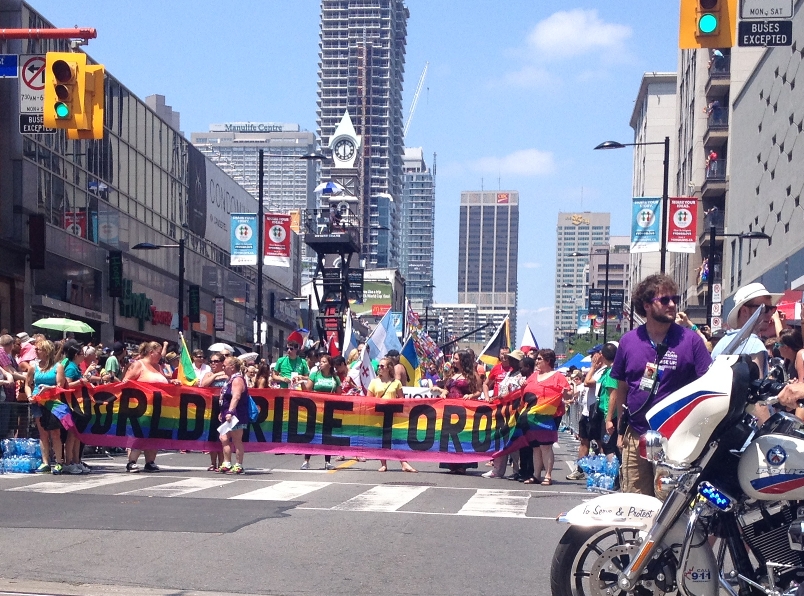 Toronto, Canada hosted an international conference on LGBTI affairs known as World Pride. This year, attention was given to formulating an international response to homophobic laws that have taken effect recently in Uganda. Kristin Schwartz has more from Toronto.

The World Pride festival also featured a human rights conference attracting delegates from around the globe. One focus of the conference was strategizing an international response to homophobic legislation in Uganda, where the government of Yoweri Museveni passed the Anti-Homosexuality Act in December 2013. The law, which took effect in March, criminalizes the so-called “promotion of homosexuality” and punishes homosexual sex with penalties that can include life imprisonment.

Atona Stanley is Executive Director and Senior Legal Advisor of the Rights Defenders and Promotion Organization in Kampala, Uganda, which provides legal assistance to gender minorities and refugees. He explained that with the passing of the law, “there’s been lots of arrests, a witch hunt, arbitrary arrests and detention, with the aim of instilling fear in the lives of gay activists, LGBT persons and human rights defenders.”

While most of those detained have been released, two men are facing charges under the new law. Moreover, Ugandan and international human rights organizations have documented evictions, denial of health care, and a sharp increase in violence against people suspected of being LGBTI. Newspapers and one media outlet have published names and addresses of 100s of people assumed to be LGBTI, and inciting violence against them.

Among those outed in this way was Richard Lusimbo, of Sexual Minorities of Uganda, who spoke on a plenary session at the World Pride Human Rights Conference: “You wake up in the morning and you’re on the front page of a tabloid with a very misleading headline like ‘How I became homo’. So literally the society around you is trained to think in a certain direction, drives them to hate you more, drives them to actually act.”

Uganda is a close ally of the United States in Africa, both militarily and economically. Last week, the United States announced that in response to discriminatory laws it will refuse visas to some Ugandan officials and withhold foreign aid to some programs.

“I’m a member of the legal committee of the Civil Society Coalition on Human Rights and Constitutional Laws,” said Atona Stanley. “Time and again we have reiterated that yes, the travel bans, the sanctions, are good but not good enough. Leave the aid, but maybe channel it through civil society organizations, NGOs, that will directly reach the people who are the beneficiaries.”

Stanley and his organization hope to contribute to a constitutional challenge to the Anti-Homosexuality Act, and other discriminatory legislation. Meanwhile, the activist group, Sexual Minorities of Uganda – or SMUG, has taken its fight to the United States, the base for evangelical Christian organizations which been involved in missionary activity in Uganda since at least 2002.

With the assistance of the Center for Constitutional Rights, SMUG has filed a lawsuit against Scott Lively of Abiding Truth Ministries. The suit argues that the outspokenly anti-gay minister’s effort to deny equal rights to LGBTI people constitute persecutions under the Alien Torts Act. Lively’s requests to dismiss the case have thus far been unsuccessful.