SCOTUS rules in favor of Hobby Lobby in contraceptives case 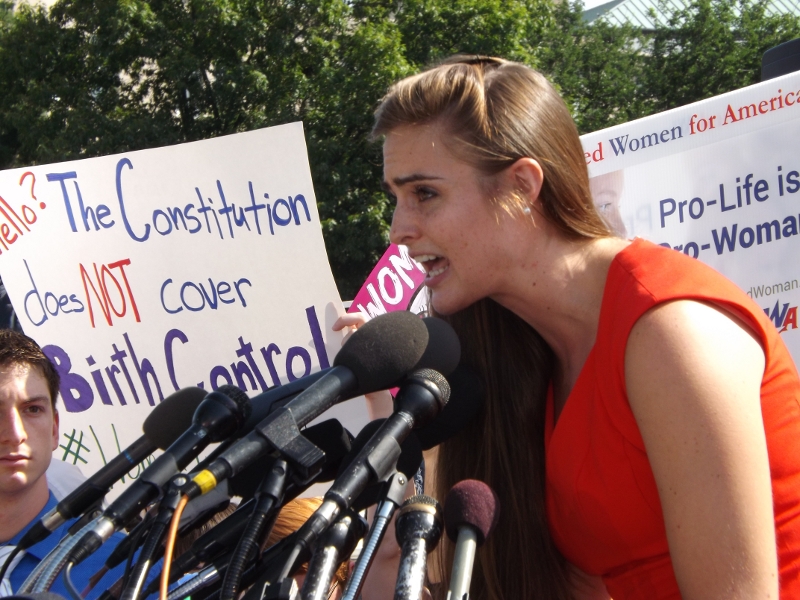 This morning the U.S. Supreme Court ruled 5-4 that some private companies can use religion as an argument to refuse to pay for certain types of contraception mandated by the Affordable Health Care Act. Dolores M. Bernal has the story from Washington, D.C.

See photos from outside of the court at the bottom of this post.

Dozens of pro-life and religious activists waited outside the U.S. Supreme Court on Monday for its ruling on a case which pitted the arts and crafts retailer Hobby Lobby and cabinet maker Conestoga Wood Specialties against an aspect of the Affordable Care Act.

One of those activists was Kristen Hawkins, the president of Students For-Life America, an organization that works with college and high schools students across the country. She said the case represents “an issue where bossy bureaucrats from Washington DC have dictated that small business owners no matter what their faith of conscious may be, they have to pay 100 percent for abortion causing drugs in their employees health plan.” Hawkins added that principal of paying for contraception one opposes on religious grounds “violates everything that our country was founded upon.”

The Greenes, the religious owners of Hobby Lobby, and The Hahns, the Mennonite owners of Conestoga Wood, objected to the Affordable Health Act’s mandate that companies must provide their employees with comprehensive reproductive health care coverage.

The private companies sought exemptions under the Religious Freedom Restoration Act. Religious non-profits are already able to opt out.

Outside of the court, Hobby Lobby supporters received senior counsel Lori Windham with cheers as she delivered the news of the ruling. “Today’s decision is a landmark decision for religious freedom,” said Windham. “The Supreme Court recognized that American families do not lose their fundamental rights when they open a business. Today’s victory of this unjust mandate is not just important for families like the Greenes, but also for religious ministries like the Little Sisters for the Poor, but for all Americans seeking to live according to their consciousness.”

Both companies objected to providing access to emergency contraception like the morning-after and week-after pills which prevent a fertilized egg from attaching to uterine lining. Some pro-life activists argue this constitutes an abortion.

Upon hearing the decision by the court, pro-choice activists were quick to share their disappointment and concerns. According to Elyse Hogue, president of NARAL America, the ruling sends a message that women are considered second-class citizens. “In fact, they went out of their way to say that this is only about contraception, which is health care only for women,” said Hogue. She added that she thinks the ruling sets a precedent, and that “the interests in this country who stand against women’s rights and stand against health care are going to come back and continue to chip away at this because it opens a Pandora’s box that extends at expanding the ruling moving forward.”

All three female justices ruled in favor of comprehensive access to contraceptives.

While standing in line to enter the court room to hear the final rulings of the term, DC resident Gabby Richards told FSRN women should be able to decide which contraception they want to use without limitations imposed by the religious beliefs of their bosses: “It’s a decision that women need to make on their own, whether you are Catholic, Muslim, whether affiliated with a religion, it shouldn’t matter because you are a woman at the end of the day. You are the one who is the bearer of the child. You want to have access to affordable contraception. Your religion shouldn’t be telling you that you can’t have that.”

The majority decision leaves open the possibility that women can obtain the same contraceptives independently from health insurance companies without having to go through their bosses. This so-called “accommodation” clause is also facing a legal challenge, but remains an option.

In the meantime, pro-choice activists said that they will issue calls to action to mobilize members of Congress to pass a “Bad Bosses” bill to try to ensure that all women have full access to contraception via the Affordable Care Act. 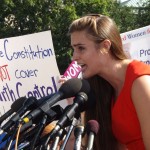 A pro-life activist speaks to supporters outside the steps of the U.S. Supreme Court on the day of the Hobby Lobby ruling. 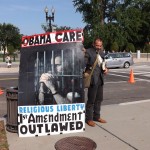 A protestor expresses his opposition to the Affordable Health Act outside of the U.S. Supreme Court. 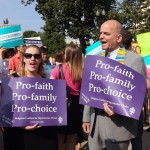 Pro-choice activists also rallied on the steps of the U.S. Supreme Court to support a woman’s right to comprehensive coverage for contraceptives. 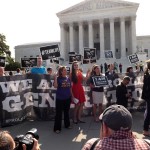 Dozens of religious and pro-life activists cheered when they learned that the U.S. Supreme Court had sided with Hobby Lobby. 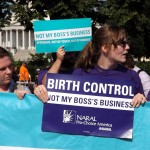 Pro-choice activists held signs like this one outside of the Supreme Court as they awaited for the court’s decision on the Hobby Lobby case. 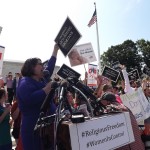 Pro-life activist Kristen Hawkings, seen here at the podium, has become one of the leading voices in the pro-life movement. 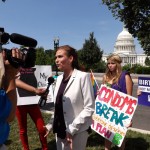 NARAL President Elyse Hogue speaking to the media and expressing her dissapointment at the Hobby Lobby ruling.