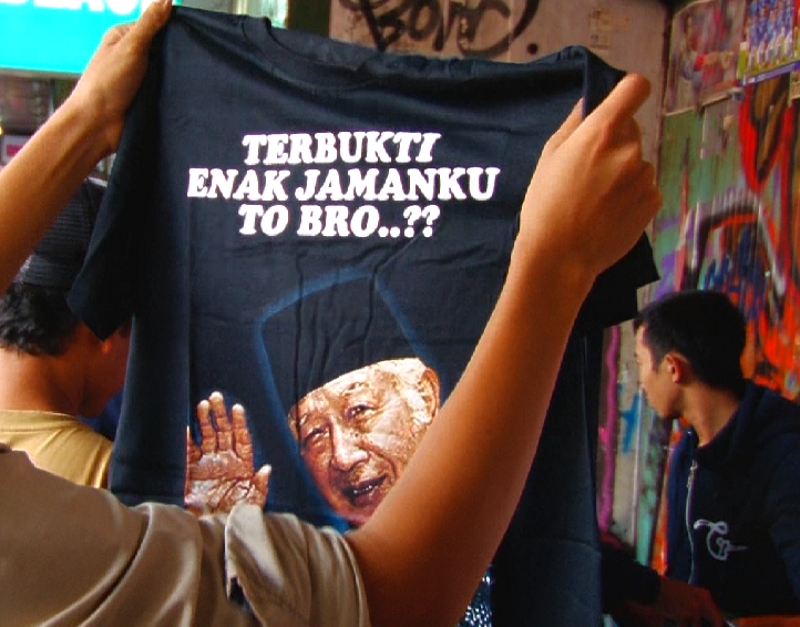 In 2004, former Indonesian president Suharto was named the most corrupt leader in the world by Transparency international. But today a growing number of Indonesians are looking back fondly on his reign. A survey by a local polling group found nearly 40 % of people asked named him as their favorite president. It’s something his former son-in-law, Prabowo Subianto, is trying to cash in on in his campaign to become the country’s next president. He has said he will award Suharto with national hero status.

A new museum dedicated to his life has also been opened in Central Java. FSRN’s Rebecca Henschke went to take a look.

Kiswoyo, who goes by one name, has brought his students on an overnight train from Jakarta to Jogyakarta to come here to this museum dedicated to the life and times of former President Suharto.

“We want to learn about our history, about the life of Suharto, about his childhood,” said Kiswoyo. “The students are very keen to learn about this.”

His students are too young to remember what it was like living under Suharto’s three-decade-long rule. Not surprisingly, given that the museum was paid for by his family, they are seeing a very positive picture of Suharto’s legacy.

Muhammad Arief Ramadhan, the museum’s manager, says Suharto should be seen as a national hero.

“The museum commemorates Suharto’s legacy and what he gave to this country during his military career,” explains Ramadhan. “We hope people will now have a better understanding about Suharto life and his legacy.”

There is no mention here of Suharto being named the world’s most corrupt leader by international anti-graft group Transparency International.No where in this museum will you find the allegations that his family hauled in up to 35 billion US dollars during his rule.

What student Yudha Yogandra has learned is that how the province of Papua became part of Indonesia.

“I know now that Suharto invaded and captured Irian Jaya and made it part of Indonesia and what other good things Suharto did for Indonesia.”

Just a few miles away from the museum, in the bustling market of Malioboro, Suharto’s face has also made a comeback. Anto sells up to 60 t-shirts a month emblazoned with the former president’s face on them.

“People are buying this shirt a lot,” Anto said. “Here’s the line: it’s better under my era, right? People say it was better during the New Order era because everything was cheap.”

While Suharto’s was infamous for his strongman tactics against political opponents, it was also a time when consumer goods and gas were cheaper. And many people think the charms of democracy have long since faded. Corruption is still rampant and elected politicians have disappointed many.

“We know that for 32 years with Suharto as our leader, as the founder of Golkar, he said that Indonesia must be prosperous,” said Bakrie, addressing a crowd. “And thank God. Do you agree that Indonesia prospered? Agree?”

What they are hoping is that the public will forget  the gross human rights abuses that took place during the Suharto era. The killing and abduction of students in the 1990s, the mass killings in Aceh and East Timor and one of the worst atrocities of the 20th century; the massacre of suspected members of the Communist Party in the 1960s.

80-year-old Mbah Karno was working as a teacher in village in East Java when he was accused of being a communist. Without a trial, he was tortured and thrown in jail.

Suharto blamed the Communist Party for a failed coup and outlawed it. Indonesia’s National Commission on Human Rights estimates that in the purge that followed, between half a million to a million people were killed.”

“I was beaten a lot,” recounts Mbah Karno of his imprisonment. “I was never given a day in court. If my answers were wrong, they beat me.  I just nodded and said yes all the time.  I could have been killed at any time.”

Indonesia’s leading historian on this period of history, Asvi Warman Adam, has no doubts about who was responsible.

“I often ask myself the question: Who was responsible?” he said. “It’s clear it was not Sukarno, because he was no longer in power. He even asked the killings to be stopped. It was Suharto that ordered the murders.”

The Act of Killing, a documentary about this dark period of Indonesia’s history, was nominated for an Oscar this year but it can’t be shown in Indonesian cinemas due to censorship.

The National Human Rights Commission  recently called for an official apology to the victims of the 1960’s killings and an investigation in the other human rights abuses during the Suharto era. Rival Presidential candidate Jokowi Widodo has promised that he will push for investigations and prosecutions of alleged abusers. His spokesperson, Anis Baswedwan, says Jokowi wants to end a culture of impunity in Indonesia.

“Part of the main campaign message is on restoring trust to law enforcement institutions to be fixed, to be reformed,” according to Anis. “That requires leaders that are willing to come in and push for change.”

When Indonesians go to the polls July 9th, it will be as much about voting for their future president, as it is a referendum on their past.