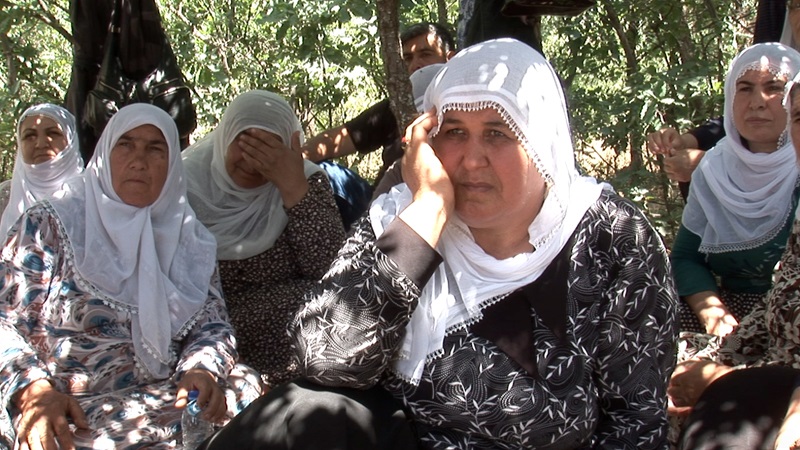 For three decades, the Kurdish rebel group the PKK has engaged in armed conflict with Turkey, fighting for greater minority rights. For the last couple of years the parties have been involved in a peace process and ceasefire. Now those efforts are under threat because of controversial military construction projects across Turkey’s predominantly Kurdish southeast. The program comes as peace efforts remain stalled, a skirmish this week left three Turkish soldiers and six rebels dead. And as Dorian Jones now reports from the predominantly Kurdish southeast of Turkey, the controversy has provoked mutual recriminations and fatal protests.

Lice in southeast Turkey is where the first shots were fired thirty years ago in the conflict between the Kurdish rebel group the PKK and the Turkish state. But peace has returned to these lands thanks to a government initiated peace process with the rebels.

Now that process is under threat. Ahmet doesn’t want to give his full name for fear of being targeted by the authorities. But he shows me the place where earlier this month a peaceful protest against the construction of a military base nearby turned deadly.

“This is where our friend Ramazan was shot,” Ahmet explains, describing what happened. “We’ve marked the place with stones but you can still see the blood. It happened around 6:00 p.m. It was a crowded protest, there were mothers, elderly people, people of all ages. They were protesting against the new military bases and dams. The army was shooting to kill. There was no warning, no pepper gas, no gas bombs before they shot. They directly shot at people, directly. People came here for a democratic protest and they were killed.”

Two people died that day, causing outrage among many Kurds. Other demonstrations in towns and cities across the region turned violent. Several soldiers are now under investigation for the shootings.

These killings have focused attention on the construction of large, sophisticated military bases which are being built almost exclusively across this predominantly Kurdish region. The bases are much larger than previous built ones and are equipped with state-of-the-art weapons and electronic sensors. According to state figures, 114 have been already been built and 166 more are under construction. The government insists the building program is just about renewing old bases. But protests are still continuing against these military outposts.

With the peace process stalled, some Kurdish rights activists are increasingly questioning the sincerity of the government.
“These military bases are places of death,” one protester explains. “They’re a place of evil, not of goodness. If Prime Minister Erdogan is interested in our well-being and loves us, why isn’t he building factories, hospitals and schools here? Then we can call him the Prime Minister of Turkey and be sure that he’s not discriminating against us. But we don’t have any trust or hope left.”

The distrust goes both ways. The ruling AK Party is also questioning the intentions of the PKK, accusing the rebels of taking advantage of the peace process.

“In many places the bases are simply being upgraded, because our security forces are inhabiting these posts and they’re rundown,” says Fatma Oncu, a member of the AK Party’s national committee, defending the military building program. “The aim is not to create a war situation. What was the peace process built on? The first condition was the disarmament and for the guerrillas to leave Turkey for their bases in Iraq. But not even 20% of the PKK militants have returned to their bases.”

But in a move to try and defuse tensions, Prime Minister Recep Tayyip Erdogan introduced into Parliament a bill to enhance the peace process. It includes formalizing the peace process and opening the door to the release of sick PKK prisoners, both key demands of the rebel group. The package is well-timed as many Kurds appear to be losing patience with the situation.

The future of the military building program is seen as an important test of the government’s commitment to peace. Sirri Sureyya Onder is Parliamentary deputy of the Pro Kurdish Party, the HDP, and a key member of the current peace efforts.

“Asking for peace and then building military bases constitutes the biggest contradiction in the world,” according to Onder, who while at a Kurdish rights rally in Diyarbakir says the military construction program has to end. “There are thousands of things to be done socially, culturally and economically in the region. The government is giving a message that it wants peace but building these military bases is the very opposite of that message, its an an oxymoron.”

Onder – speaking at a mass demonstration in Diyarbakir, the main city here – promised that if the peace process continues, the PKK leader Abdullah Ocalan – who’s been in prison for 15 years – would be free next year to address them in his place. Observers say that hope is one of the most powerful reasons why Kurds remain committed to the peace process.