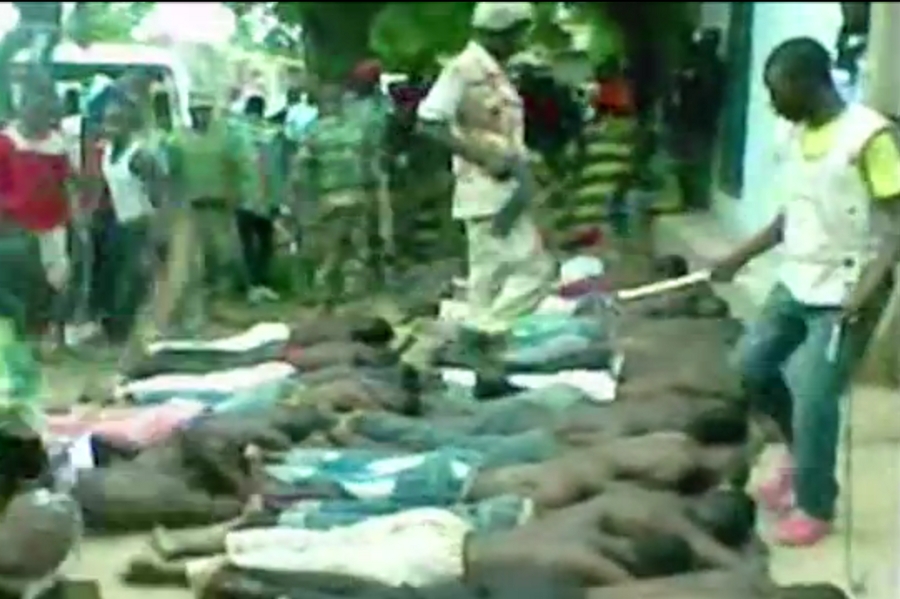 Screenshot of a video obtained and distributed by Amnesty International showing men in military uniforms and civilian militia members conducting a "screening" of detainees.

Fighting in northeastern Nigeria between Boko Haram militants and the country’s armed forces has displaced around 400 thousand people this year alone. That’s according to the most recent estimate from Nigeria’s National Emergency Management Agency, current through the end of July.

The fighting between the Islamist militia and state security forces began five years ago, but 2014 has seen a sharp increase in the violence… as well as in the number of reports of human rights abuses.

Now, Amnesty International is accusing both sides of the conflict of committing war crimes and has released a series of videos to back up the claims. One video documents the extra-judicial executions of multiple prisoners committed by men in Nigerian military uniforms. Another video shows a process known as “screening” in which male residents of an area are rounded up on suspicion of belonging to Boko Haram. A third shows the aftermath of a Boko Haram attack on a village which killed nearly 100 local people.

As displaced villagers flee the conflict zone, they bring the stories of what they’ve survived to Nigeria’s major cities. Sam Olukoya reports from Lagos.

Download
Amnesty International says it has found evidence that both Boko Haram and Nigerian armed forces are committing war crimes in northeastern Nigeria.

People who have fled the violence in Borno state have confirmed some of these atrocities in interviews with FSRN. Thirteen-year-old Mary Elijah said she and other members of her family witnessed her father and a pastor being killed when Boko Haram attacked their church.

Boko Haram is infamous worldwide for its April abduction of more than 240 school girls from their dormitory. Some girls managed escape, but most are believed to still be in captivity.

While the abduction has faded from international headlines, the group Bring Back Our Girls continues to hold rallies to demand the Nigerian government take action to rescue the girls. The group now has a new concern: the use of females as suicide bombers.

Four suicide bombings by females, some of them teenagers, were carried out in late July. Authorities also say they arrested a ten-year-old girl who had explosives strapped round her waist, but gave no further details about her case.

Ized Wankee of the Bring Back Our Girls campaign fears that Boko Haram might force the school girls it is holding captive to become suicide bombers. “I am not saying categorically that these are the girls they are using but they have girls with them and are using girls as suicide bombers,” she pointed out. “Even if these are not the girls they are using they have access to over 200 girls. That is a very scary thing.”

These fears have some basis. Two schoolgirls taken captive by Boko Haram, but who managed to escape after several weeks, say the group is using children in its violent campaign. One of the schoolgirls, who does not want to be named, said during her captivity she saw children under the age of ten being trained for combat: “They have children, they are training them at home how to shoot. There is one of their leaders who will line up the children and show them how they carry out attacks when they go out. Two boys are about my age. The others are younger. There are many of them.”

The other schoolgirl said militants used her as a porter when Boko Haram raided a village, killed people and burned down houses. “They gave me a big bag, which I carried,” she told FSRN. “Then we went to a church, then they asked me to sit down. Then, three of them entered into the church and burned the church. When they entered the church, they shot their guns, then the bullet injured one of them.”

The use of children in armed hostilities constitutes a war crime under international law.

Amnesty International says its research indicates mass arbitrary arrests and extrajudicial executions are part of a pattern of human rights violations by the Nigerian military and the Civilian Joint Task Force militia operating in northeastern Nigeria.

The group is calling for an immediate, impartial and independent investigation into alleged war crimes and abuses committed by both sides against the region’s civilian population.

Photo: Screenshot of a video obtained and distributed by Amnesty International showing men in military uniforms and civilian militia members conducting a “screening” of detainees.