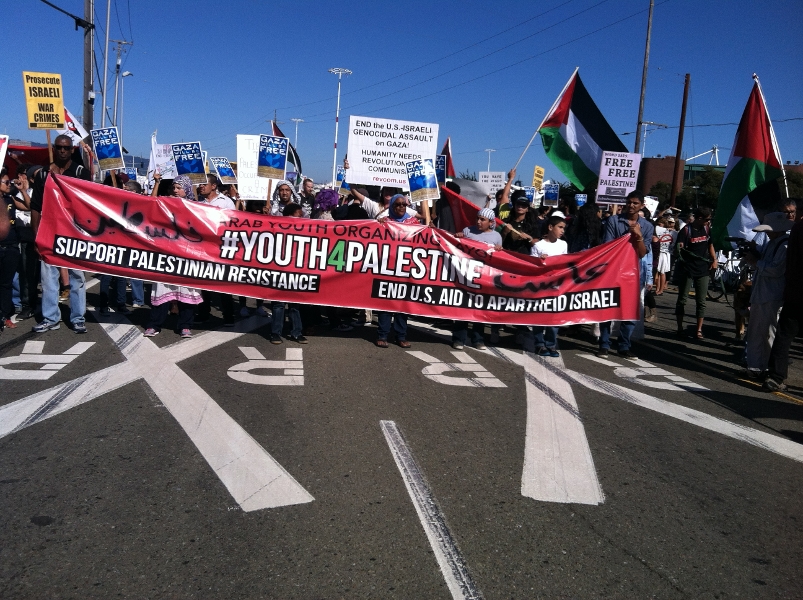 Activists opposed to Israeli government policies towards Palestinians blocked the shipment of Israeli cargo in Oakland this past weekend. Organizers say it’s a move to put economic pressure on Israel to stop military strikes in Gaza and territorial occupation in the West Bank. More port actions to block Israeli shipment of goods into the US are planned this week along the West Coast and in Canada. FSRN’s Christina Aanestad reports.

About a thousand people marched to the port of Oakland on August 16th and 17th to block a shipment of Israeli goods into the US.

The protest targeted a shipment of goods by ZIM Integrated Shipping Services, Israel’s  largest shipping company. The Israel Corporation – a holding company founded by the government of Israel – owns 32% of ZIM’s stock.

Reem Assil with the Arab Resource Organizing Center says the action is part of a larger movement to put economic and political pressure on Israel through an international movement of boycotts, divestment and sanctions.

“The economic impact from actually stopping a ship from unloading it’s goods hits Israel where it hurts,” commented Assil. “So this is part of an economic isolation strategy and is part of larger movement to boycott their goods to stop participating in anything that fuels the Israeli economy.”

Some critics of the “boycott, divestment and sanctions” – or BDS – movement say it is Anti-Semitic. Some advocates of the campaign prefer a narrower boycott strategy which targets goods made in illegal settlements or Israeli military equipment.

Monadel Herzallah, an organizer with U.S. Palestinian Community Network, says activists are also focusing on U.S. companies which sell equipment to Israel for use against Palestinians: “As we speak today, the U.S. Palestinian Community Network are protesting in Chicago, where Boeing, the strongest and richest company that manufacturing fighter jets around the world and they are responsible for importing killing machines that result in wiping out families. We are holding these companies responsible for that. Another example is Caterpillar, which is supposed to be an agricultural company. The Israelis are using it to demolish houses in the West Bank.”

The recent Israeli military offensive known as Operation Protective Shield killed nearly 2,000 Palestinians in Gaza. According to United Nations data, most of the dead were civilians, including a large number of children. Israeli military strikes also caused substantial damage to Gaza’s infrastructure.

Participants in the weekend port shut down say their protest came in response to a call out from Palestinian General Federation Trade Unions to take non-violent action against the Israeli occupation.

A letter from dozens of Palestinian teachers, doctors and lawyers calls for Palestinians to be able to move freely in and out of Gaza and for an end to the blockade of Gaza’s land and sea ports. Local activist Krishna Decide says frustration at watching the death toll climb in Gaza while the US government funds Israeli military programs led her to take part in the port shutdown.

She said that “innocent people are caught in the crossfire” when Israel and Hamas militants target each other and that “the US role in Iron Dome has become untenable.” When questioned about the attacks targeting Israel, Decide responded: “I don’t think the hundreds of children who are dying are attacking Israel. Whether or not Israel is under attack, their counter attack is really targeting the wrong attackers as it were.”

Organizers compare the boycott, divest and sanctions strategy to the international solidarity movement to end apartheid in South Africa. The economic boycott of apartheid-era South Africa received support from unionized port workers who refused to unload cargo from the country. Clarence Thomas of the International Longshore and Warehouse Union told FSRN that the union will not take a position on outside issues due to ongoing contract negotiations, but that longshoremen have “a long tradition of supporting community picket lines.”

Thomas says it took ten years before the entire union took a position on Apartheid South Africa. In 2010, the longshoremen men honored a protest against Israeli cargo and refused to unload goods from ZIM when protesters arrived to blockade the port then. Unionized workers also refused to cross the community picket line this time during Sunday’s protests at the Port of Oakland.

Similar protests are scheduled to take place at ports in Seattle and Tacoma, Washington on Wednesday, and later in Vancouver, Canada.

Calls for comment made to ZIM Integrated Shipping Services were not returned by deadline.