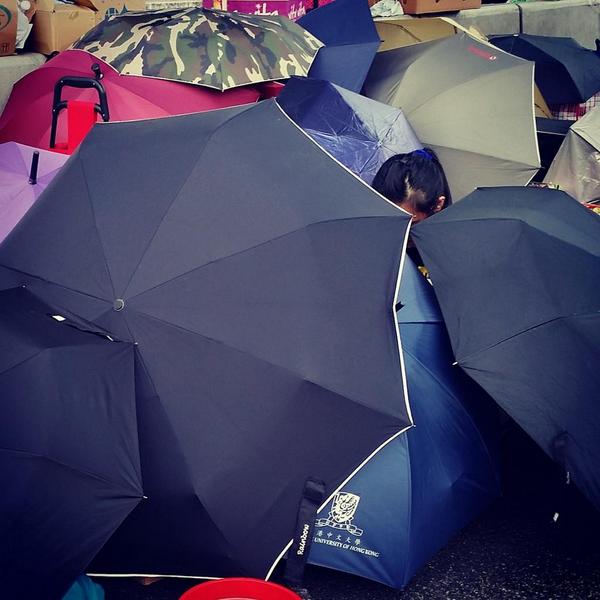 Umbrellas - to deter clouds of tear gas - have become a symbol of the pro-democracy demonstrations in Hong Kong. (Photo Credit: Samuel Chu)

In Hong Kong, massive pro-democracy protests continue.  The demonstrations began last Wednesday,  triggered by Chinese authorities’ announcement that only approved candidates will be placed on the ballot in Hong Kong’s first elections since the former British colony was transferred to Chinese rule.  Many people there fear that Beijing will not deliver on promised democratic rights in the vote scheduled for 2017.

While peaceful protests are common in the largely free Hong Kong, authorities reacted to the current spate of actions with uncharacteristic force.  Police in riot gear met tens of thousands of people on the streets with tear gas and batons earlier this week.  Students who took to the streets last Wednesday were joined Friday by members of Hong Kong’s Occupy movement and mass civil disobedience followed. The region’s Chief Executive,  Leung Chun-ying,  has so far refused to meet with protest leaders. The crowds are expected to swell on October 1st, a public holiday that celebrates the founding of the People’s Republic of China. For more on the pro-democracy demonstrations,  FSRN’s Nell Abram speaks with Samuel Chu from the streets of Hong Kong. Chu, whose father is one of the founders of Occupy Central, travelled from Los Angeles to Hong Kong to observe the protests.

Samuel Chu:  Well despite the prediction of demise for a few days now, it appears that, as the clock has struck and turned to October 1st — today happens to be the national day for China and the Communist Party — the streets are filling up.  Not only in Admiralty and the governance complex where it first started,  but I’m now hearing and actually seeing here on the edge of the Central District, where the financial district is, is filling up.The streets in Causeway Bay and then on the other side of the Kowloon Peninsula, the streets are filling up in Mongkok, in Jordan, and now they’re trying to connect the protests in Tsim Sha Tsui  which is a fairly famous nightlife spot.

NA:  The protests were started by students, however many other groups have now joined. What are you seeing in terms of the makeup of the people in the streets?

SC:  Yeah so as you said, last week at the beginning and then weeklong- a boycott of classes were started by the student unions of the various University here in Hong Kong. And that took a turn obviously on Friday and Saturday when, about I think 50,000 folks were out here at Government Square and the leaders of the Occupy Central movement, three co-founders, decided that this really was an important moment to support what the students were doing and so they launched their civil disobedience work on early Saturday/Sunday morning at 1:45.

And then things really took a turn, I actually was there at Admiralty during the early afternoon of Sunday and seeing then the crowd swelling, young, old, people with their kids. I was actually at the very front line when the crowd was trying to push its way into Harcourt Road where they’re now basically completely occupied. So I think from that point on you begin to see a very diverse community surrounding and coming out in support of students who started this last week and I think it’s been quite a sight to see.

NA: What is it the students are asking for Samuel Chu? What are the demands of the protesters?

SC:  So, early on in the protests, this was always centered around, as you mentioned, the election of 2017.  There was a promise made during the turnover from British rule back to China. Hong Kong was not going to only maintain its democracy and free press and intellectual freedom, but really given a chance to govern itself or serve, you know, for self governance, for self determination. And so that has always been the key demand and when, on August 31st, when the Chinese government announced that they were not going to allow an open election.– in fact they came up with this sorta sham election format where their people were going to  only approve the candidates who “love” the country and then they let people vote on those candidates… that really became the rallying cry.

So what it is being demanded now by the students, by Occupy Central, and really on a united front for movement in a protest this big, you’re not seeing any deviation from the demand that they’re making, which is the election for 2017.  And really, associated with it now, the resignation of the current Chief Executive because they believe that he has lost all the authority and credibility to actually govern and negotiate this deal.  So as a part of the opening up of the political reform that they’ve demanded, it requires also the resignation of the current government.

SC:  This is where, I think, there’s been an interesting parallel. I think that despite the fact that the single clear demand is for political election reform here for Occupy Central and for the students here.  It is very much about the fact that there’s been an erosion of free press, intellectual freedom, and, you know, a long growing economic inequality in this city and I think that this is not just something that people are looking at in terms of the future. People have been experiencing and struggling with this for the last two decades and I think that you have seen now the boiling point, the tipping point of people saying that, “You know what this is important not just because we want self determination to select and elect a leader, but because that decision is gonna impact the kind of economic equality, the kind of civil rights, the kind of freedom of press and academic freedom that you’re going to see.”

One of the things that I think makes the people of Hong Kong very nervous and why I think there’s a growing number of positive support for this protest is that over the last 20 years you’ve seen a steady erosion of those rights. You know, you’ve seen newspaper editors and publishers have been removed to be replaced by more pro Beijing government people.  You’ve seen attempts to pass laws and regulations to criminalize any action and words criticizing central government. There was a number of years back a proposal for a citywide education curriculum that focuses on supporting communism and the central government. And so all those things over time have incrementally built up resentment, fear, anger and I think that has finally boiled over.

NA:  As this broad demographic of residents of Hong Kong take to the streets and appear to be in it for the long haul, we hear that social media has been largely blocked on mainland China, blocking news of what’s happening in the streets of Hong Kong from the people in Beijing and beyond. The reaction from Beijing has been fairly firm, the concern might be that this sort of pro-democracy protest might spread to mainland China.  Where can this go from here? Where possibly can this go that Beijing will come to a place of agreement that will placate the protesters while also maintaining their posture on the mainland?

SC:  I really think that this is putting the Chinese government in a very difficult position. In fact, in the last week, they made the puzzling declaration that Taiwan should consider the same deal that they gave to Hong Kong, to be reunited with China under this one country, two systems and the Taiwanese government just laughed them out and said, “Why would we want to be in a system that is simply and obviously not working?” Hong Kong is not the only front  that I think the communist government in China is dealing with.

You’ve seen increased violence in Tibet, in the Xinjiang area of China where it has been, even with the news blockade that we see and the blackout, you’re hearing and seeing stories of massive violence enacted as they deal with this idea of how to live under a communist government.  So I think that the stakes are high and I think that the difference here is that Hong Kong has always lived, in its recent history, as a free democratic — enjoyed all the freedoms that none of the other territories, regions in China enjoy; so I think that a lot of pressure is on the Hong Kong and the Chinese government and I think that that’s what has really sharpened this particular confrontation at this moment.

And I think that on Sunday, when the tear gas canister came out and when the riot police came out and when the excessive force was used on its own citizens, I think that became the turning point.  I think that woke up the majority of Hong Kong to reality, that what they have always feared is not just fear, it is… might… could… and has come to reality.  And I think they are now standing up to say, “You know what, we don’t know where this is going to go, we know this is something that’s not going to be resolved easily, but this is simply too important to ignore and to stay aside.

NA:  Samuel Chu, thank you for joining us on Free Speech Radio News.

For a slideshow of photos taken by Samuel Chu at the Hong Kong protests, click here.