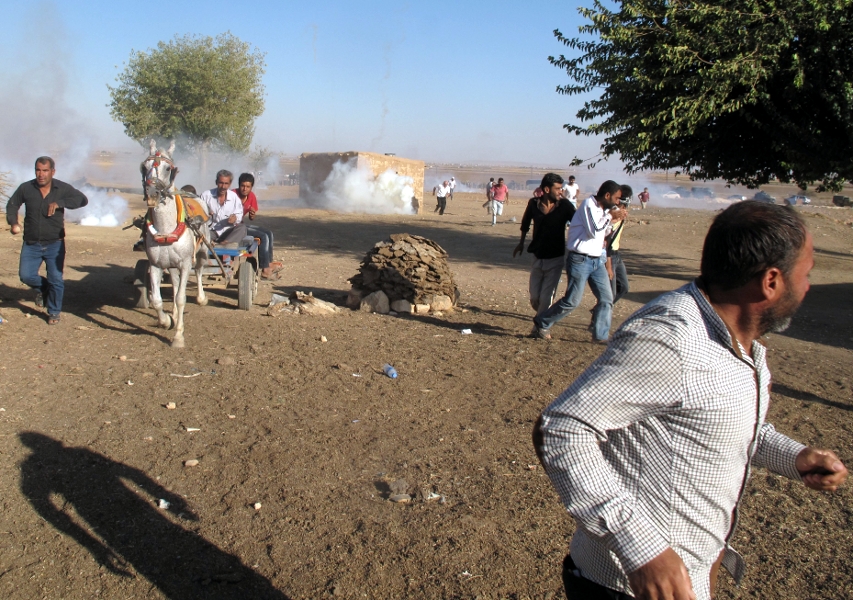 Kurds from Turkey flee tear gas fired by Turkish riot police Sept. 26, 2014 after demonstrators briefly forced their way over the border near the Syrian city of Kobane. Credit: Jacob Resneck

In Syria, fighting continues to rage between the Islamic State and Kurdish militias over a key Kurdish city near the Turkish border. But on the Turkish side of the border, anger is boiling due to Turkey’s crackdown on its own Kurdish population attempting to cross into Syria to join the fight. FSRN’s Jacob Resneck reports.

There’s been a lot of fighting over the weekend with ISIS – or Islamic State, or whatever they call themselves these days – trying to capture the city of Kobane. The Pentagon says U.S. air strikes over the weekend hit a few targets on the outskirts of the city, the first support it’s lent to Kurdish militants fighting to hold their ground.

In the Turkish border town of Suruc, local people here welcome the outside military help. But one man, Omer Ercin, claims it hasn’t gone far enough.

“America says it is attacking from the air—but we don’t see any results. Why?” asks Ercin, answering “Because it drops a couple bombs over in Raqqa and other places, but the genocide is happening in Kobane.’

Washington hasn’t said where its airpower flew from. But it almost certainly wasn’t Turkey.

Ankara has closed NATO bases to strikes against Islamic State and has sealed the Syrian border to its own citizens trying to fight against ISIS. That’s led to fury among Turkey’s Kurdish minority who are actually the majority in these borderlands and are being prevented from joining Syrian Kurds in the fight against ISIS.

Kurdish recording artist Memet Sipan arrived at the border from Istanbul but was turned away.

“If I could, I would cross the border and join the militias and fight with them but now the border police are preventing me,” says Sipan.

He agrees to share a national Kurdish song in the open air.

The fighting is very close to here. At a nearby crossing just a couple miles away, men from the Syrian village of Alishar are watching a battle in the distance. Ahmet Malali is furious at the Turkish soldiers whose backs are to the battle as they watch the villagers. He’s angry, he says, because Turkish soldiers are also preventing Syrian refugees from crossing the wide open plain.

More than a hundred and fifty thousand Syrian refugees have already poured over the border in the past week. And the number could climb.

Over the weekend, pro-Kurdish political parties bussed in hundreds of people from across Turkey who quickly overwhelmed a small band of border guards and crossed into Kobane – if only for an hour. On their return, they were greeted with tear gas and riot police.

So why is Turkey keeping the border sealed to Kurds wishing to defend their communities in Syria? The Kurdish militias are aligned to the outlawed Kurdistan Workers’ Party (PKK), ­ a guerrilla group fighting for broad autonomy in Turkey. It’s listed as a terrorist organization by Turkey, the E­U and United States.

Kurdish politician Kamuran Yuksek says the militias’ fight is with ISIS – not Turkey. “The Kurdish militias are fighting the Islamic State because it’s about their homeland,” he told FSRN. “Of course they’re not interested in attacking Turkish forces.”

Nihayet Tasdemir, who in May was released from a Turkish prison after spending five years in pre-trial detention for suspected links to the PKK, says this fight has galvanized women to push even harder for gender equality.

“Women within the resistance movement have become more empowered,” Tasdemir explains. “Now it’s against ISIS – before it was the Turkish state and other enemies – but it’s making women stronger because they know there’s a patriarchal culture and they are fighting against this culture. ”

Meanwhile, the Turkish government has said it would join the U.S.-led anti-ISIS coalition , but so far has been short on specifics. The ruling party’s nationalist politics coupled with Islamist-roots make many people here suspicious that its leadership harbors sympathy for ISIS.

Or at least as far as it extends to ISIS’ fight with the P-K-K and its allies.

As the fighting continues and anger boils over among Kurds on both sides of the border, it’s clear that Turkey won’t be able to remain on the fence much longer.