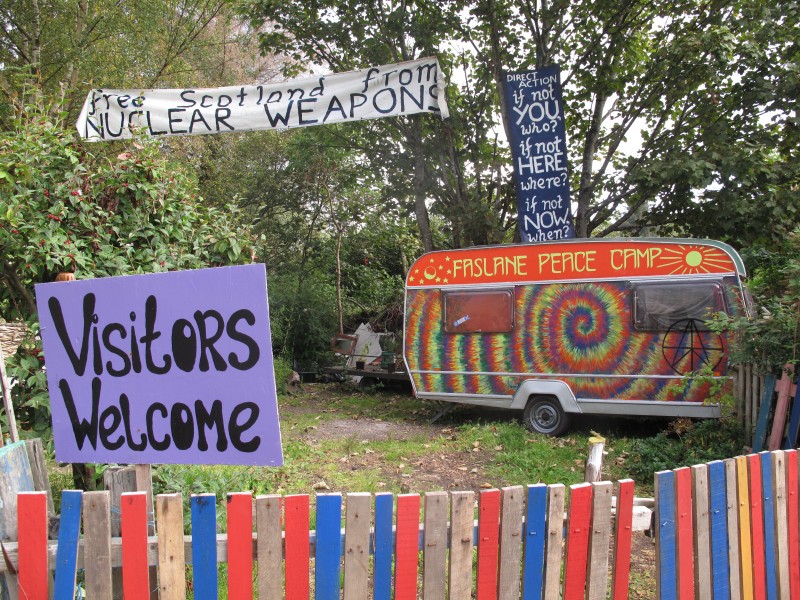 The Faslane Peace Camp, where anti-nuclear activists have kept a constant presence since 1982.

This Thursday voters in Scotland will decide whether to break away from the United Kingdom. One of the driving issues of the debate is the fate of Britain’s nuclear­ armed submarines. That’s because the UK’s Trident submarine fleet and its 225 warheads are based near Glasgow and the Scottish government wants them gone. As FSRN’s Jacob Resneck reports the debate in Scotland isn’t just over independence it’s rekindled the debate over nuclear freeze.

On a bluff over Faslane Naval Base on the River Clyde, a polite but suspicious military policeman shadows myself and two local anti­nuclear critics as we gaze down on what’s perhaps Britain’s most sensitive military installation.

“We’re not happy about being the home for it and we don’t actually think it’s necessary,” says real estate attorney Graeme McCormick ­ is a stalwart pro-­independence YES campaigner ­ and he wants Faslane’s warheads removed for good. “God forbid but if one was ever going to go off then that would really be the end of civilization as we know it.”

If the Scottish referendum succeeds he may get his way. The Scottish National Party which is driving politics from Edinburgh has pledged to evict the Trident submarines and the warheads being stored near the town of Helensburgh within four years.

It’s not an idle threat. The SNP has been campaigning for nuclear disarmament for years and public opinion supports it.

“Across other parties, across the population as a whole, there’s no real appetite to have nuclear weapons in Scotland,” says defense expert Stuart Crawford, a retired Lt. Colonel in the British Army. “So that is why it’s become ­ for many people ­ a red­ line issue.”

Crawford argues should Scotland become independent, the Trident issue could be a top priority after the inevitable horse trading begins over the myriad of issues that will inevitably arise as it negotiates its exit from the United Kingdom.

“All roads lead to Trident on the Clyde and whether it stays or whether it goes,” Crawford argues. “You have a government in power which seeks independence which says it needs to go because that’s what it believes ­ in principle and has support of that point of view but the practicalities are such that it can’t be done quickly.”

But in the community of Helensburgh, it’s a hot issue. Not least because so many have moved here to work on the base.

There are many surprises and contradictions here. Vivien Dance, an elected councilor and vocal critic of nuclear arms, moved here in the 1970s when her husband, a submarine officer, was transferred to work on the nuclear­-armed Polaris submarines.

Today she’s a vocal YES campaigner despite the fact that both she and her husband hail from Yorkshire in England.

“I think in the ‘70s we needed the nuclear deterrent,” she says. “The Cold War was upon us but I think we’ve moved on from there. Um… the kind of wars we’re fighting now will not be won by nuclear weapons. Trident now has had its day. It’s not a weapon that will be needed in the future.”

But not everyone in this community feels this way.

“These very nuclear weapons have kept the peace since World War II so they’re exceedingly valuable,” says NO campaigner Alan Johnson, 72. “We’d be wide open to attack from jihadists all sorts of people if our defenses were taken away.”

“Faslane is the biggest single site employer in the whole of Scotland,” she says. “It accounts for a quarter of the full­ time jobs within my local area so the impact of removal of Trident and the closure of Faslane would be devastating on the local economy and on local jobs.”

Nuclear arms have been a divisive issue in the UK since at least the 1970s.

Across the road from the base’s main gate, is the Faslane Peace Camp, an encampment of activists that have kept a constant presence since 1982.

Colorful hand painted trailers welcome visitors. Activists here are a mix of hostile to the referendum to cautiously optimistic.

“We need to keep the pressure on and make sure that our politicians don’t compromise or negotiate and we get what we’re being promised at the moment,” says 32-­year­-old resident activist Jimmie Watson of Glasgow.

He argues that timing is key. If Trident is evicted in less than four years, that could force the British military to move its arsenal out of the UK entirely or even scrap them entirely.

“Any shorter time scale is a disarmament time scale a time scale for it to be decommissioned completely and removed from the world and that’s what we hope will happen,” Watson says.

Already there’s been talk about moving the warheads to neighboring France or even the Atlantic seaboard of the United States.

But whatever the case, should Scotland achieve independence it would find itself with real leverage over its larger neighbor with regards to the future of Britain’s nuclear arsenal.

(All photos by Jacob Resneck. Click any thumbnail to launch slideshow.) 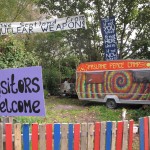 The Faslane Peace Camp, where anti-nuclear activists have kept a constant presence since 1982. 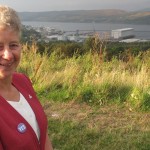 Vivien Dance is an elected councilor and vocal critic of nuclear arms. She’s a vocal YES campaigner despite the fact that both she and her husband hail from Yorkshire in England. 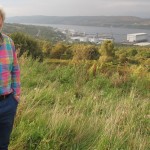 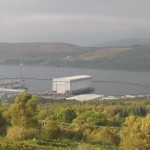 The Faslane Naval Base as seen from a bluff on the River Clyde. 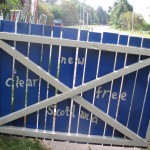 A gate at the Faslane Peace Camp calls for a “New, clear, free Scotland.”