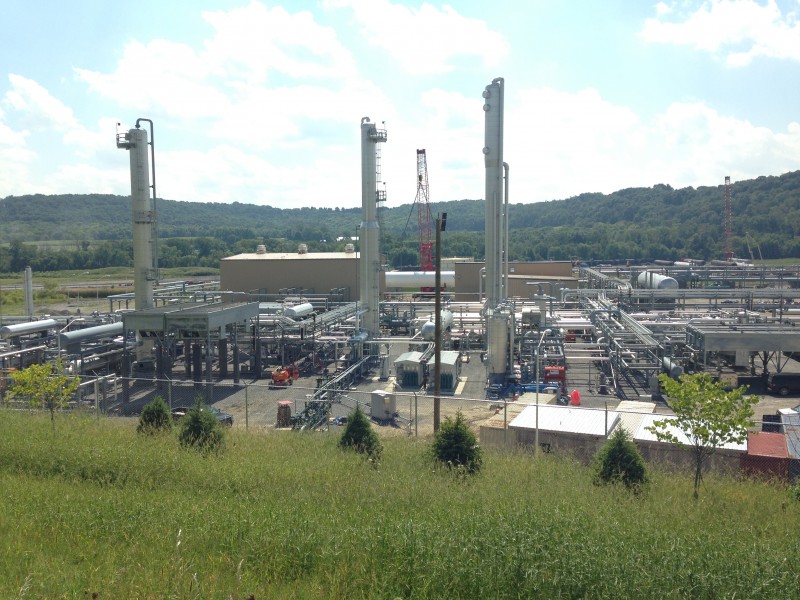 On the front lines of the fracking wars in western Pennsylvania, a group called Protect Our Children is fighting for a one mile buffer between schools and natural gas infrastructure; another group is even calling for a two-mile buffer. Meanwhile gas wells, compressor stations and processing plants proliferate all around them. And two studies just released draw opposite conclusions about the safety of living near the industry. Melinda Tuhus reports from Butler County, Pennsylvania.

On a beautiful late summer day, the green rolling hills of western Pennsylvania seem a picture of tranquility and rural bliss. But up close to the growing infrastructure of natural gas fracking, it’s a different story. The lights and noise of the drilling process, the truck traffic, the air pollution and concerns about water contamination have affected the quality of life of many residents. Some are drawing the line at their children’s exposure to fracking while at school. A group called Protect Our Children has united groups of parents around the state to call for no fracking within a one-mile radius of school campuses.

Penni Lechner is 36-years-old and has lived her whole life around Summit Township. She says she fought to stay there and raise her four kids away from the city, but she’s living now in an industrial zone. Her three teenage boys attended Summit Township School, which now has a well pad 900 feet from the school and 500 feet from the playground.

Sitting on a bench on the grounds of Summit Township School, she describes what happened over the past couple of years when XTO, a subsidiary of Exxon, set up shop nearby.

“They put the drilling rig up, then they put a bigger drilling rig up and that went on for almost a year, and then they fracked it,” Lechner recalls. “They put a bunch of chemicals into the ground. And then they flared it off. Last school year the first two days of school they flared it. They didn’t even wait for the kids to not be here, they just flared it. There was methane shooting up 250 feet into the air. There’s an impoundment pond back there, and that holds chemical water. There’s no fence there; the kids can just walk right up there if they want to.”

The proximity of the fracking operation to the town’s school confirmed Lechner’s decision to continue to home school her 8-year-old daughter – who had leukemia as a toddler – because she worries about how exposure could affect her daughter’s compromised immune system.

Lechner says she and her family have experienced many health problems since fracking came to town, namely nosebleeds, headaches and rashes.

Crystal Yost is a newcomer to the area, having moved here in 2012. Her twin 11-year-old daughters are sixth graders in the Mars School District. After the local school board rejected a proposal by Rex Energy to lease the school grounds for sub-surface drilling, the company announced its plans to put six wells within a half-mile of the school.

“We are worried about health effects on the children from air emissions, the air pollution, the VOCs,” says Yost, who along with other parents has organized against that plan as well, and so far the state Department of Environmental Protection has not issued drilling permits. “We are worried about an accident, specifically if there were to be an explosion, in some other cases in PA specifically, they have a one to two mile radius of evacuation. So if this well pad exploded within a half mile of the school, theoretically the entire school district would be in an evacuation zone, and we just felt it’s not using common sense to put your school district in an evacuation zone.”

Yost says after researching the matter, the Mars Parent Group thinks a two-mile buffer is a better plan.

A new peer-reviewed study conducted by a researcher at Yale University shows that people living within a kilometer — about half a mile — of a working well reported upper respiratory or skin problems more than twice as often as those living more than two miles away. The Heinz Endowments, which has taken an anti-drilling position, funded the study, which has been criticized by pro-industry groups.

At the same time, a non-peer reviewed study at Penn State University funded by the industry showed that fracking is safe. Its conclusions were predictably attacked by anti-fracking groups.

David Brown is a toxicologist who works with the Southwest Pennsylvania Environmental Health Project, which has identified many residents with health problems.

“They were seeing effects in 30-40 percent of the people who were reporting, and there were a dozen or more different health effects,” Brown says of another study from Earth Works that showed similar results to the Yale study. “They ranged from rashes to difficulty breathing to heart problems to confusion; a lot of cognitive effects; headaches, and an intense sense of fatigue. There were differences between those people who were within 1,500 feet of a facility and those that were outside 1,500 feet of a facility. You shouldn’t interpret that beyond 1,500 feet there weren’t effects, because there were effects even there. We would expect you’d have to be out a minimum of a mile, and maybe two miles.

Neither study concluded definitively that the health impacts resulted from fracking, and researchers called for further investigation. Supporters of the buffer for schools note that although their campaign calls for no drilling infrastructure within a mile, it will be hard to put the genie back in the bottle where it already exists, but they are adamant about keeping future gas industry development away from their kids.