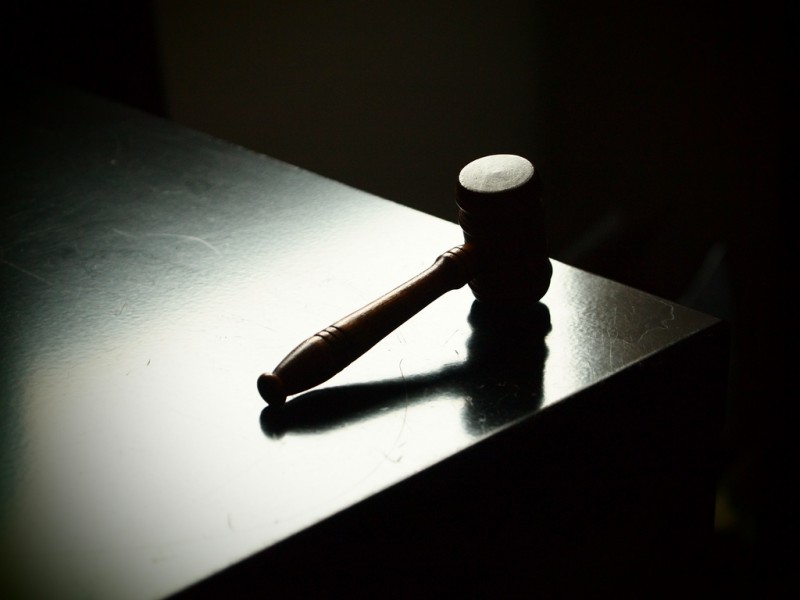 The 2014 elections are underway around the United States with voters already casting ballots both at early polling sites and by mail. Next Tuesday is Election Day, and costly campaign advertising has been hitting mailboxes, electronic devices and TV screens at a rapid pace. In thirty-nine states, many of those ads are for judges fighting to gain or keep their seats on the bench. But the candidates in these judicial campaigns are often prevented from personally soliciting funds; the theory is that by directly asking for money they dilute the presumed impartiality of the courts. So the financial heavy lifting is often done by special interest groups and political parties.

A recent report from the Brennan Center and Justice at Stake – a nonpartisan organization that tracks money and politics in judicial elections – finds that “political parties, outside groups, and state Supreme Court candidates have spent more than $9 million on TV ads this election cycle.”  FSRN’s Shannon Young talks with Justice at Stake Executive Director Bert Brandenburg about campaign financing of judicial races and what that means for the integrity of the court system.

Shannon Young: Campaign contributions to judicial elections don’t often receive the same level of attention or scrutiny that legislative or executive elections do. Why is that?

Bert Brandenburg: Well, the biggest overlooked story in American politics today is what’s been going on in state supreme court elections. Around the country, we’re seeing campaign fundraising levels smashed by interest groups and partisans who are essentially trying to buy up courts. And what that’s doing is that’s turning judges into professional fundraisers. And so you see in state after state since the year 2000, enormous amounts of money coming into judicial elections and then the judges then pressured to raise money from the very parties who appear before them in court.

Young: Your organization, Justice at Stake, recently released a study in partnership with New York University’s Brennan Center for Justice which examined money in judicial elections this campaign season. What trends did you find?

Brandenburg: Well, we’re finding that, in addition to judicial candidates being pressed to raise more and more money to keep or gain their seats, that outside interest groups are flooding the airways as well. So 63% of TV ad spending in judicial races this year, so far, is by these non-candidates groups. And so now you have big players in politics starting to throw their weight around in judicial elections.

Judicial elections were not created for this kind of pressure. They’re used to fairly small amounts of money and when even a modest amount is put in by an outside group, it can not only risk tipping a race, but above it all it starts to really put pressure on the judges themselves. And the risk is that they’ll start looking over their shoulder at possible campaign contributors or opponents instead of keeping their eye on what’s going on in the courtroom. And we know from public opinion research that a majority of Americans think that campaign money is affecting decisions in the courtroom, in fact nearly 9 out of 10 Americans believe that.

We’re also seeing research coming out suggesting that in criminal cases, once the amount of campaign money washing through an election gets to a certain tipping point, the judges will start tipping more toward the prosecution in criminal cases. And the reason for that is that the campaign ads in judicial elections are quite typically run on crime issues. You accuse some judge, no matter what party they are, of somehow being soft on crime because you find some decision somewhere where a defendant didn’t get the maximum they could have gotten.

Young: You mentioned spending increased around 2000, but how have judicial campaign spending levels changed since the Supreme Court’s Citizens United ruling essentially removed limits on campaign contributions from corporate interests?

Brandenburg: Well it’s interesting; the increase in money around judicial elections was underway before Citizens United, but that decision definitely added fuel to the fire. And so we did see a large uptick in the cycle right after that in outside money coming in to these races and there’s really an all bets is off mentality now emerging around judicial elections. So they’re becoming a lot like elections in other arenas. And that’s bad news for a couple of reasons. One is that it’s never good when races are simply overrun by big money and negative ads. But again, when you think about the role of courts, it’s particularly important. If money affects a decision made by a legislator or an executive that stinks. If money affects a decision made by a judge, you’ve just violated the Constitution.

Young: Judges are supposed to recuse themselves from cases in which they may have a conflict of interest. Are those rules binding or voluntary?

Brandenburg: Each state that elects judges has some kind of rule in place for when a judge step aside and the problem is, many of those states have rules that are increasingly becoming out of date. They were not written for an era in which big money was flooding into judicial elections so right now it’s typically up to the judge and the judge is given a lot of latitude. And what needs to happen is tighter rules need to be set so that judges are more willing and more likely to step aside in cases where big money is, essentially, appearing before them. Because the groups that typically give to judges or spend on their behalf, even if it’s not a direct contribution, are typically the ones who appear before them in court, who else would give to a judicial race? So, the higher the amount of money grows, the greater the chance there is of a conflict of interest on the part of judges.

Young: What interests groups are spending the most on judicial campaigns this election cycle?

Brandenburg: Well over the past dozen years, it’s been a duel between one side, the business community, and, on the other side, trial attorneys and labor unions. In general,the business community has had the upper hand and in this particular year, we’re seeing largely money coming from a group called the Republican State leadership committee, which has targeted a number of states’ judicial elections: North Carolina, Tennessee, Montana, and now a district court election in Missouri. We are seeing, in Illinois, a PAC involving money from trial attorneys, trying to oust a particular Justice. The other interesting thing we’re starting to see is some money coming in from Americans for Prosperity, that’s the Koch brothers group, and they have now spent in a couple races this year. Not the kind of money they’re used to spending in different kinds of races but the fact that they’re in at all is interesting.

Young: Judges used to be prevented by law from speaking to issues. They can now, but many still don’t. Given that voters can’t get judicial candidates go on the record on the issues, how can voters hold them accountable for the level at which campaign contributions may influence their decisions?

Brandenburg: A judicial election is a challenging thing on a good day and that’s in part because voters often feel starved for information. Anybody who has a judicial election in their area, number one, would do well to go ahead and go to the web, see if there’s a photo guide put out by the League of Women Voters for example or perhaps a BAR Association that tries to take a good look at judges and be fair and objective in doing so. Otherwise, it’s going to be a pretty big challenge, and this is a real problem when you have an arena where information is not always very high because it doesn’t always get covered that much, where there’s not a lot of money for voter guides. And then in the meantime, you have the interest groups, trying to spend money just to turn out their base and you may see a commercial but that, of course, doesn’t tell you very much, it tells you a slogan. And this is one of the problems with judicial elections these days, as the money grows higher, the information level doesn’t necessarily do so. So it becomes really a contest of money versus a contest of informed voters.

Young: Do any races in particular draw your attention due to spending levels?

Brandenburg: I would say this year we’ve seen record-breaking money and the primary elections for the Supreme Court in North Carolina. We saw record-breaking money in August when Tennessee had its Supreme Court elections. We’re now watching Michigan and Montana and Missouri and North Carolina again. We’ve also seen, just in the last week or so, an effort flare up against some justices in Kansas as well.