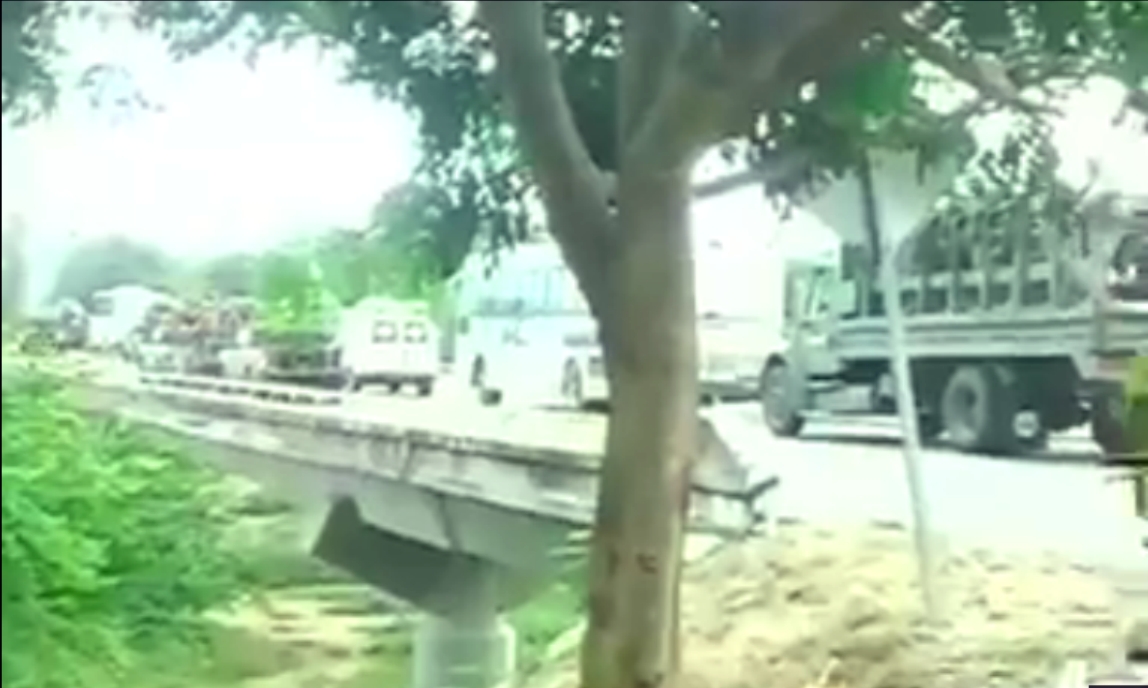 Screenshot of video shot in Santa Maria Ostula on July 19, 2015.

A 12-year-old boy is dead after a deadly encounter between civilians and military forces in a coastal town in the Mexican state of Michoacán known for a popular uprising against organized crime. Shannon Young has more.

By the time a convoy of military and naval forces and police rolled out of the municipality of Santa Maria Ostula, Michoacán last Sunday the young boy was dead and another six people were badly wounded. Officials blamed townspeople, saying soldiers fired shots into the air in response to gunfire that came from the surrounding hills.

But a video circulating online raises questions about the official version of events. The shooting came after townspeople blocked a local bridge, angry that their elected community police leader was suddenly arrested at a scheduled meeting with officials earlier that day. In the video, a long caravan of military and police personnel line up to cross the bridge overlooking a ravine, military transport vehicles move on to the bridge and gunfire erupts. Though the video is low resolution, soldier’s rifles do not appear to be aimed at an upward angle, as officials initially claimed.

Agustin Vera, a community leader from Santa Maria Ostula, traveled through the night to Mexico City where he gave the community’s version of events at a press conference. He said that the military provoked the entire situation. Vera said first soldiers arrested the elected community police commander, Cemeí Verdía, when he arrived at the meeting; then police and soldiers quickly visited other local leaders and confiscated community property, like two-way radios and official seals. And while community members did block the road, Vera denied they opened fire.

“It’s totally false what the army is saying,” Vera said, “that the community members were on the offense, that they opened fire from the hillside. It’s false. They want to whitewash as usual. And since they have the power, their version is the one that is heard.”

Santa Maria Ostula is one of the first – possibly the first – indigenous community in Mexico to rise up against organized crime. In 2008, indigenous locals closed ranks, ran criminals and their politically-influential sponsors out of town, and implemented the traditional governance system known as “uses and customs” which includes naming their own police force by popular assembly vote.

Human rights campaigners say what happened last weekend in Ostula is anecdotal of a larger pattern of harassment and violence by multiple actors against organized indigenous communities in resource-rich areas.

“In their community, various people have been assassinated in recent years,” explains Fernando Rios with the “Todos los Derechos para Todos” network of human rights organizations. “And it’s worrying because it’s the leaders who are being targeted by organized crime, by mining companies operating nearby, and also by governmental groups, like the military in this latest incident.”

The military’s use of force has recently come under increased scrutiny following two incidents in particular: the disappearance of 43 students near an army base in Iguala and a massacre in Tlatlaya. The in the latter incident, soldiers are accused of killing at least eleven alleged criminals execution style after they had surrendered, and then manipulating the scene to make it appear as though the deaths occurred during a firefight.

The small municipality of fewer than 1500 residents has paid a high price for its battle against criminals and reclaiming of ancestral territory from land-grabbing power brokers. Since the start of Ostula’s popular uprising in 2008, 33 community members have been killed and the whereabouts of six others are unknown.

Community leader Agustin Vera says that while taking on organized crime is dangerous enough, openly countering the official story and coming forward with allegations of troops fraternizing with local crime bosses are much larger risks.

“Sincerely, we no longer believe or feel support from the government,” Vera says. “Quite the contrary. When we see someone from the government, we don’t really know who we’re dealing with. We don’t know what’s going to happen. Like I said, we’re here now [at this press conference] but don’t even know if we’ll make it back alive or if something will happen along the way because of the statements we’re making here.”

Earlier this month, eight human rights organizations including Amnesty International and the Washington Office on Latin America sent a letter to the U.S. State Department calling for the U.S. to restrict conditioned Merida Initiative funding to Mexico’s military and police due to documented human rights violations.