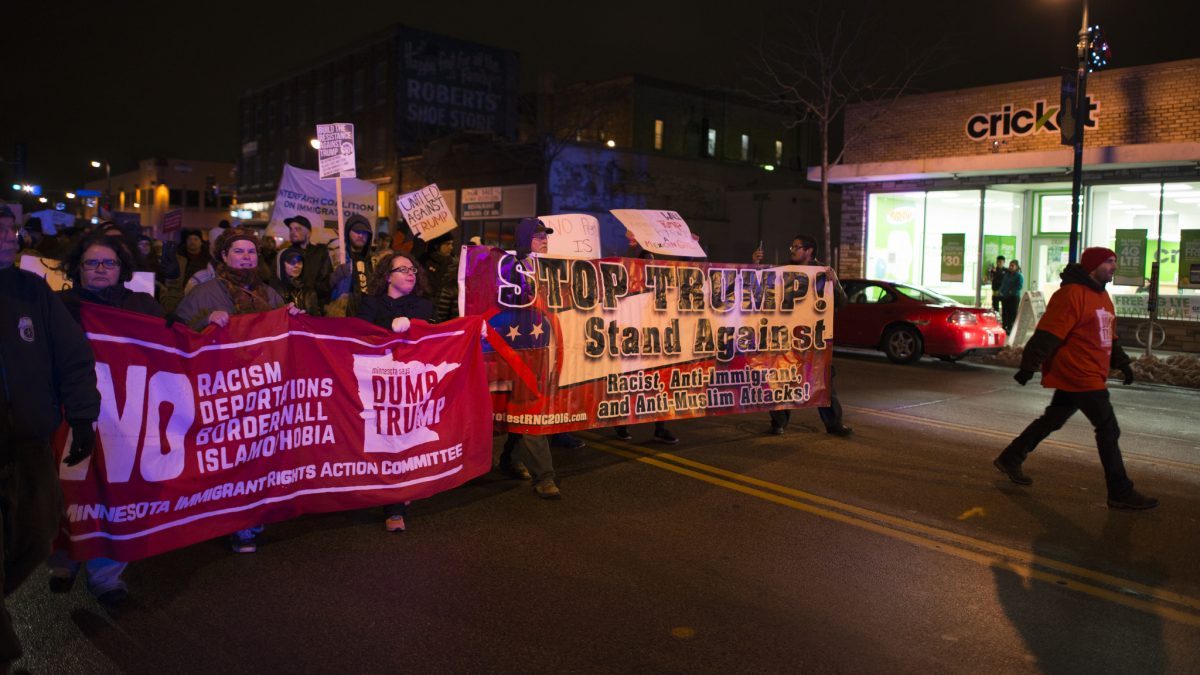 Immigration police have arrested at least 600 people in raids in about a dozen states, including in so-called sanctuary cities, during the past week, in what officials call ‘routine enforcement actions.’ The full scope of the sweeps is unclear, and advocates for undocumented immigrants say they may be much broader than currently known. But following President Trump’s executive order on immigration enforcement, many fear the dragnet is now much more widely cast. FSRN’s Shannon Young has more.

“You know, we’re all trying to piece together what’s happening,” says Frank Sharry, founder of the immigration reform group, America’s Voice. He was among the leading immigration advocates who repeatedly expressed concern during a Monday press call about the lack of verifiable official information regarding the targets of immigration sweeps that have resulted in hundreds of detentions and deportations in recent days.

Immigration and Customs Enforcement, the authority behind the detentions, has repeatedly stated that the arrests are routine, targeted enforcement, but organizations with close ties to immigrant communities say this is clearly not the case.

Cristina Parker is immigration projects coordinator with Grassroots Leadership in Austin, Texas – a city where dozens of undocumented people have been picked up in recent days.

“I think we know that what happened over this past weekend and the end of last week here in Austin was not routine at all. One of the ways we can really gauge that is the fact that we run a deportation crisis hotline here – we’ll usually hear between one or two calls every one or two days, something like that, and we had hundreds of calls in the past few days,” Parker told FSRN in a telephone interview. “Now, a lot of those were just people calling because they were worried and wanted to know their rights and such information, but many, many of them – at least a dozen – were folks who were calling because they had had a family member picked up. When we combine that with the numbers we hear from the Mexican consulate, that’s how we know it was about 60 to 70 people who were picked up.”

News of the coordinated arrests spread quickly across social media platforms. Parker says her organization began receiving reports early on, but has been cautious to vet the information to avoid panic: “We’ve received tons and tons of reports about, you know, ‘I see this’ or ‘I see that happening.’ We usually ask folks when they’re reporting that to us to snap a picture and send that to us. The reason we do that is because we’ve had a lot of pranks; unfortunately, our information went out on some white supremacist websites and so they were definitely sending some false leads to us. So we ask people to snap a picture, and that’s actually how we were able to really early on confirm this.”

“Every administration, going back since the Bush administration and the Obama administration, also had fugitive operations. But fugitive ops is supposed to focus exactly on that, on fugitives, on individuals who have been convicted of a crime and are deemed deportable, or individuals who are now a priority, such as, for example, under the Obama administration, recent entrants,” Hincapié explains. “However, the big difference now is that there are no priorities, so everyone is a priority. They’re using the fact that fugitive ops exists, they’re using the fact that there are some people who they may deem, or they have been deemed, a priority before, because this executive order basically says everyone is now a target.”

In his first week in office, President Donald Trump signed an executive order on internal enforcement of immigration laws. He billed it as a get tough strategy to go after quote ‘criminal aliens’. However, the order isn’t specific about what kind of crime constitutes a priority for deportation and those targeted for removal don’t have to be convicted – only charged.

Further, the order calls for officials to detain anyone suspected of violating any law, including Federal immigration law – which could make anyone who has crossed the border without authorization subject to arrest.

“And for the first time, the ocean liner started to get turned around and most of the people that were being deported by ICE, something like 98 percent, in fact fit into their categories, and status violations were no longer the basis for picking people up and calling them criminals,” says Sharry. “I think we’re back to the bad old days in which the term criminal means someone who’s here without papers trying to survive, rather than someone who, in a common sense way, has in fact committed a crime and been convicted of it.”

ICE has not yet released details of how many people were arrested in recent sweeps and for what offenses. But advocates say it’s already clear that people who were not the named targets of removal orders were picked up – including people like undocumented parents whose detention would’ve triggered humanitarian guideline considerations during the Obama presidency. Again, Marielena Hincapié of the National Immigration Law Center.

“All of the guidances have apparently been tossed out the window,” Hincapié says. “This is a new day. This is the deportation force that he has been threatening since his campaign. That’s the big difference.”

Many advocates view arrests that occurred in so-called or perceived sanctuary cities as an attempt to send a message that no area of the country is exempt from the long arm of immigration law. But Grassroots Leadership’s Parker says that Austinites flooded the organization’s hotline volunteering to help out – including with tasks like visually confirming reports of ICE actions in given areas.

“It just shows people’s willingness to step up and help out. And then, of course, all the folks who are willing to be activated to go try to confirm and see any ICE actions happening,” says Parker. “The fact that people were ready and willing at the drop of a hat to do what they could to verify and protect people, I think that really speaks to what we’re about here and I think that’s a silver lining, is that this community responded by rejecting these raids pretty forcefully.”

Not even a month into the administration of a president who has vowed to deport an estimated two million people, immigrant communities are bracing for a storm.