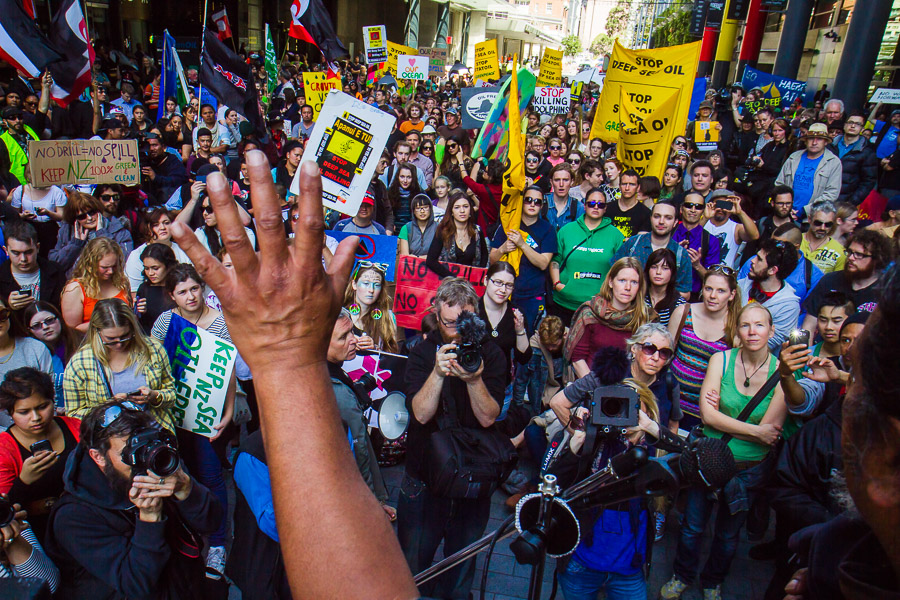 A Maori leader talk to the crowd after a demonstration against deep sea oil drilling, in Auckland on September 29th, 2014. / Robin Dianoux

New Zealand has opened up its coastal waters in recent years to dozens of oil companies interested in prospecting for deep sea oil. Last week, government officials from all over the world, including New Zealand, met in Lima for the latest UN-sponsored climate talks, which went into overtime as countries struggled to reach a consensus. Opposition to deep sea drilling in New Zealand has taken various forms, including the tongue-in-cheek. Carla Green has more.

New Zealand’s natural beauty has given the nation a “green” reputation worldwide. But it’s poised to become the latest country to open up its offshore areas to deep sea oil drilling, and opponents have rallied in protest.

Earlier this month, close to one hundred people showed up at the beach in the seaside town of Dunedin, Otago, to literally stick their heads in the sand. “The action today was a bit of a tongue-in-cheek salute to the government’s attitude and policy around climate change and energy,” said Paul Young, a member of Generation Zero, a group that pushes for action on climate change. “I really do feel like they’ve got their head in the sand when it comes to thinking long-term about the need to act on climate change.”

Up until now, the only commercial oil and gas extraction in New Zealand has been shallow drilling off the coast of Taranaki, in the northwest of the country.

Proponents of the drilling insist that it will be a necessary boon to the New Zealand economy. Oil is already New Zealand’s fourth largest export and royalties generate around $700 million in government revenue each year, according to Energy Minister Simon Bridges.

In an interview with national television network TV3, Bridges said that opponents to oil drilling need look no further than Taranaki to find a reason to support it. “The proof’s in the pudding in Taranaki – highest paying jobs, productivity there,” said Bridges. “If we were to get one more basin doing anything like that, I don’t think I’m putting a ‘glossy picture’ on this, it would be a game-changer.”

It’s still unclear whether the recent drop in oil prices will slow activity in Taranaki or dampen interest in prospecting for oil here, considering the relatively high cost of deepwater extraction.

Steve Abel, an organizer with Greenpeace New Zealand, predicts that oil companies will likely sit on resources until the prices rise again: “It’s conceivable that they would – if they find oil – particularly now, with low oil prices, it’s no way that it’s economic to produce oil – the per barrel value is not enough to make it economic. Their view of oil production is 10 years, 20 years in the future. When they will be expecting the price to be more attractive.”

On December 9th, New Zealand Petroleum and Minerals – or NZPAM – announced that it had awarded 15 additional exploration permits to 10 oil companies, including Chevron and Norwegian oil giant, Statoil.

Rosemary Penwarden of Oil Free Otago, the climate justice group that organized the Head-In-The-Sand event in Dunedin, argues that deepwater extraction is just too risky, “and we should not be taking that risk, we have no right, to take that risk on behalf of other creatures.”

Renny van der Velde is the manager of the Marine Pollution Response Service at Maritime New Zealand, which is charged with dealing with a spill if there is one. The service recently came out with a new strategy on how to deal with oil spills, but one challenge that remains is distance and New Zealand’s relative isolation. It takes time for ships equipped to deal with an oil spill to arrive, “so we understand that there will be a time issue for response,” he acknowledged.

Marine biologists have also expressed concern over the effect that seismic testing might be having on marine mammals, ranging from hearing loss to death, although the research in that area is still limited. And one of the new permits overlaps with the North Island West Coast Marine Mammal Sanctuary.

But according to Bob Lloyd, the Director of Energy Studies at Otago University, spills and encroachment on marine mammal sanctuaries pale in comparison to the risk of climate change. That’s the real problem, he says: “All of those risks can be mitigated and you’ll probably quite rightly argue that they can be reduced to low amounts. The risk of climate change can’t be reduced to very low amounts, it’s extremely high, it’s staring us in the face, and with that argument, in my opinion, there is no point in discussing oil spills.”

New Zealand has traded heavily on its image as a clean and green country in the past, but its newfound openness to deepwater drilling could permanently tarnish that image.

A global climate action rating was released at the UN climate talks last week, just days after Groser’s arrival. New Zealand received a “poor” rating overall and was ranked 43rd out of the 61 countries surveyed, squeaking in just ahead of the U.S. and China.