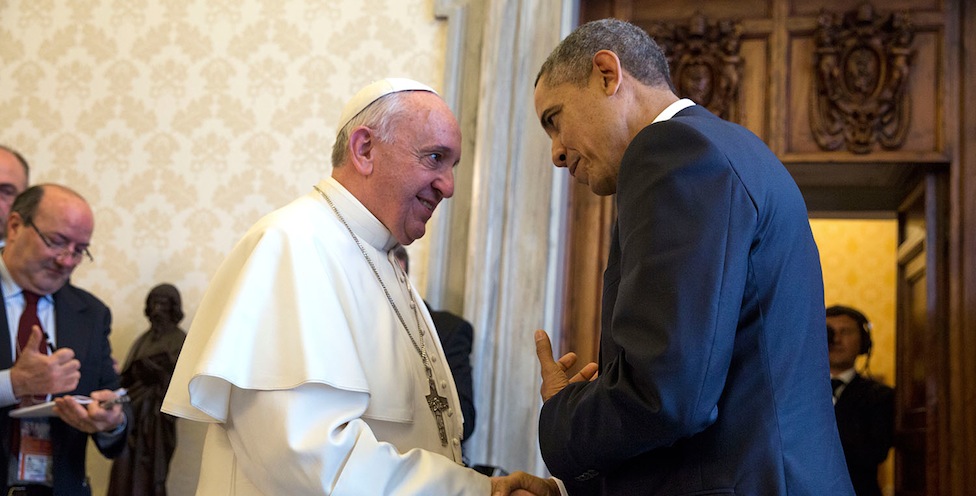 An estimated 32 million people who grew up Catholic in the U.S. have left the church in recent decades, an exodus driven in part by the perception that its teachings are irreconcilable with modern American life. Pope Francis’s first U.S. visit, which started in Washington, D.C. on Tuesday and ends in Philadelphia on Sunday, is part of an effort to bridge the chasm. FSRN’s Dalia Hatuqa reports.

“We love you Pope Francis,” a lone male voice shouts across the White House south lawn at the end of the ceremony on Wednesday, drawing laughter and applause from the crowd before the military brass band strikes up. That was the general consensus in Washington as Pope Francis made a historic visit to the U.S., home to 51 million Catholics.

In recent years, however, the Catholic church has been plagued with scandal and a disillusioned congregation. But unlike many of his predecessors, Pope Francis has managed to sway many back to the pews through his unorthodox character and his focus on modern life problems.

One of those is immigration, which became a central theme throughout his U.S. trip. The pontiff made it a point to refer to himself as the son of immigrants during his addresses at both the White House and Congress. On Wednesday, during the papal parade a 5-year-old girl named Sophie Cruz bypassed police blockades. The pope saw her and allowed his security detail to bring her to him. She hugged and left him with a gift – a letter pleading with him to do something about immigration reform in the U.S.

Cruz later shared part of the contents of her letter with local New York station, WKBW-TV: “Pope Francis, I want to tell you that my heart is sad and I would like to ask you to speak with the president and the Congress in legalizing my parents because every day I am scared that one day they will take them away from me.”

The pope also addressed many other issues that his predecessors have avoided. In his speech before a divided Congress, he talked about the need to abolish the death penalty and to end the arms trade. He also spoke passionately about poverty, the role of the economy in alleviating it, and the environment.

“Now is the time for courageous actions and strategies, aimed at implementing a culture of care and an integrated approach to combating poverty, restoring dignity to the excluded, and at the same time protecting nature,” Pope Francis said.

Some say it shouldn’t come as a surprise that the pope is the maverick that he is. People got a small glimpse of what his papacy would look like when he first chose the name Francis for himself. Cardinal Donald Wuerl is the archbishop of Washington. He was part of the conclave that elected Pope Francis in 2013, and he recalls when the pope explained to bishops why he decided on that particular name.

“What was surprising was when they asked him what name do you take,” recalled Cardinal Wuerl. “And he said Francis. It was then an audible – not gasp – but awareness that this was different and then he explained afterward he chose the name because Francis was the pope of the poor.”

Throughout his papacy, the pontiff has attempted to change issues that have captured the global imagination and given many hope that the Catholic church will emerge from years of scandal and stagnation. Some have even dubbed the impact he has had as the “Francis effect.”

The pope has become known for addressing taboos in the Catholic community in the U.S. and elsewhere, such as gay and lesbian issues and abortion. He’s prompted Americans to question the status quo when it comes to hot-button issues like immigration, the environment and the economy.

Francis Rooney is an American former ambassador to the Vatican: “One of the things that have become evident is his views are strongly formed and dominated by his Latin American and Argentinian experience and that’s rooted his view of corporations, free enterprise, capitalism, and the preferential option for the poor.”

But the papal visit has not been without controversy.

Native American groups strongly criticized the Pope’s canonization of Junipero Serra, a Spanish-born Franciscan friar known for starting nine Spanish missions in California in the 1700s. What followed was a decline in the indigenous population so steep, that its modern-day survivors refer to it as genocide.

Pope Francis addressed the controversy surrounding Serra’s canonization in his speech before congress. “Tragically, the rights of those who were here long before us were not always respected,” the pope said. “For those peoples and their nations, from the heart of American democracy, I wish to reaffirm my highest esteem and appreciation.”

While some have dubbed the pope a liberal for tackling controversial issues, others say his ability to listen to people across the political and ideological isle is what makes him unique.

“Out of all the popes I’ve known in my adult life, he is open to hearing people,” says Loretta Sanchez, a Catholic democratic representative from California. “A lot of people say he’s left and liberal. I don’t think he’s any of these things. I just believe that he’s opening up and allowing to have a dialogue that is so important, especially within the Catholic religion.”

In the pope’s U.S. visit, immigration problems both at home and abroadseemed to be his central focus. What effect his words will have on policy makers remains to be seen.