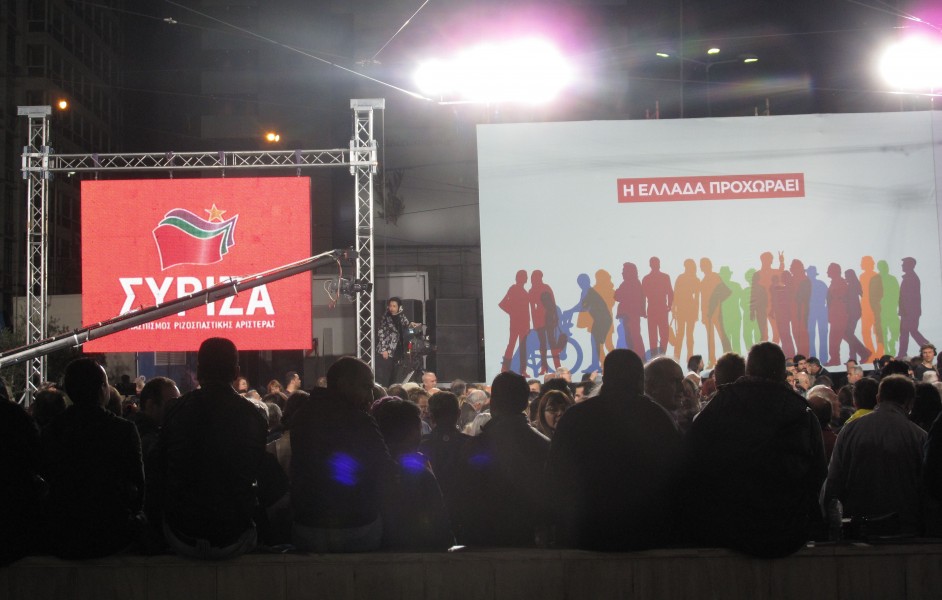 In Europe all eyes are on the Greek elections where an upstart leftist party is challenging the Eurozone’s five-year policy of austerity that wielded deep cuts in public spending and caused plummeting living standards, especially in southern Europe.  FSRN’s Jacob Resneck reports that Sunday’s election is about much more than who will rule Greece.

Ever since the country accepted bailouts worth about $270 billion  to service bad loans to European banks the country has had to accept deep, deep cuts in spending – a practice known as austerity and promoted by European politicians as a way to get Europe’s sagging economy back on track.

Whether it works or not is debatable. What’s not debatable is that millions of people have been affected. Official unemployment in Greece is 27 percent. After a year out of work Greeks lose their access to universal health care and many can’t afford to pay out of pocket – because they’re out of work.

So many end up at clinics like one run by the international charity Doctors of the World and originally set up to service economic migrants and asylum seekers – and now serving ordinary Greeks.

Clinic coordinator Christina Samartzi says about 40 percent of patients here are Greek citizens though in some clinics that figure is much higher. She says her organization has appealed to the government but with public health slashed by about 25 percent there’s little response.

“We don’t see any improvement we explain the situation what we see on a daily basis in our clinics – but they seem like they don’t understand,” she said.

The center-right government led by the New Democracy party has defended the cuts as necessarily imposed by Greece’s creditors. The trouble is the debt is now about 175 percent of Greece’s GDP meaning the country has little chance of paying it off any time soon.

Perhaps that’s why a radical leftist party called Syriza is polling 4-points ahead of the ruling party and is tipped to become the strongest political force in Greece.

Syriza’s 40-year-old leader Alexis Tsipras has made a government stimulus package and forcing Europe to re-negotiate Greece’s debts the cornerstone of his party’s campaign.

“Give us a mandate to rule so we can put an end to the catastrophic bailouts and be able to negotiate,” Tsipras said Thursday. “Give a vote to stability; give us the power to take Greece to new levels, give Syriza the majority!”

Many Greeks say they are cautiously optimistic.

Dimitris Kaloyannidis a 30-year-old college graduate, says he’s semi-employed making him one of the luckier ones. “Sometimes in the year, sometimes I don’t work. Now I’m working and I take 370 euros ($415),” Kaloyannidis said.

Greece isn’t the only one crippled by debts in the wake of European bank bailouts making Syriza’s appeal to the electorate relevant in other Eurozone countries.

Only about 10 percent of Greece’s bailout went to public coffers. The rest of the money is used to repay debts to banks and with ordinary Europeans bailing out big banks, public anger is mounting across the continent.

In Spain, the one-year old party Podemos is polling strong. Its 36-year-old leader Pablo Iglesias is in Athens this week campaigning for Syriza as part of a larger delegation of European leftist parties who want to end the austerity measures that keep banks afloat but keep people out of work.

“I think our countries seem sometimes colonies of the financial powers,” Iglesias said. “I think that we need national sovereignty and we need a president that defends the people and I think Alexis Tsipras and Syriza are an example of that.”

Europe’s rightist parties and international financiers have warned that confronting the financial system would be reckless and further harm the economy.

Mark Weisbrot, co-director of the DC-based Center for Economic and Policy Research, is one of many economists who say the real extremists are those who are unwilling to revisit the austerity measures.

Rather than help these economies recover they’ve used the global financial crisis to undo much of Europe’s social safety net that was created after WWII.

“Their main goal is the structure of these economies to change them to be something more like the U.S. with less of a welfare state, weakening labor bargaining power with labor law reforms,” Weisbrot said. “To change the society to one that of course ultimately would have a much less equal distribution of income.”

Politicians in other Eurozone countries are watching Greece closely to see how well Syriza polls. That’s because the mantra of austerity has become less convincing for many in the European Union and the electorate, first in Greece and then perhaps next in Spain,  are poised to hold their leaders to account.