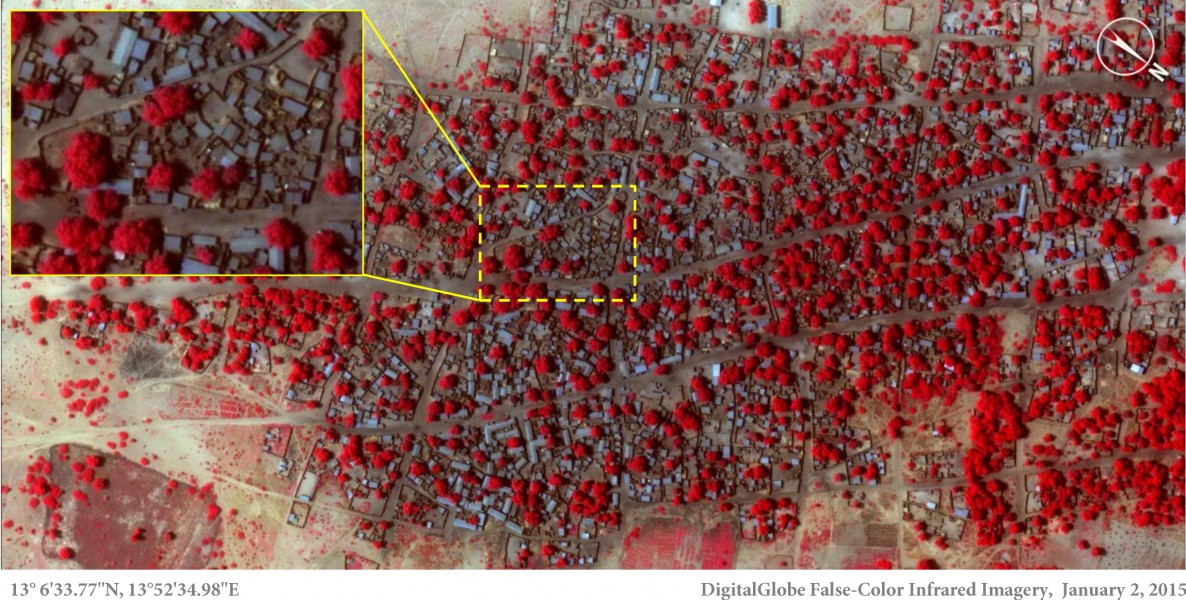 Satellite image of the village of Doro Baga in northeastern Nigeria taken on 2 Jan 2015. Shows an example of the densely packed structures and tree cover in Doro Baga before the village was razed by Boko Haram. (Image credit: DigitalGlobe via Amnesty International)

The Islamist sect Boko Haram has claimed responsibility for a major attack on a town in northeastern Nigeria. More than two thousand people were reportedly killed in the attack in Baga town, the worst in the six years since Boko Haram began its violent campaign to instill strict Islamic rule in Nigeria. This comes as the Boko Haram-fueled crisis is threatening to spread to three of Nigeria’s regional neighbors. Sam Olukoya reports from Lagos.

Internally displaced persons put up make-shift shelters in the federal capital Abuja as similar sites are springing up across Nigeria. The Boko Haram insurgency has forced more than a million people to flee their homes.

The attack on Baga displaced more than twenty thousand people. Augustine John survived the attack and is now living in a camp, described what he saw.

“They started shooting and killing people,” John recalls. “After the killing started, bodies began piling up everywhere. There were corpses burnt completely beyond recognition, they were like ashes. Others were shot or had legs chopped off, they were lifeless. There were also mutilated corpses without heads. Even the houses, we were unable to retrieve anything, fire had burnt everything.”

The leader of the Boko Haram sect, Abubakar Shekau, accepted responsibility for the January 3rd attack on Baga and surrounding villages in an online video.

The human rights group Amnesty International puts the death toll at around two thousand. Many survivors like John spent several days in the forest after escaping from the insurgents.

“The night we escaped, we ran into the bush and hid there. Even then they were still pursuing us,” explains John. “They came after us into the bush and they caught some people and they beheaded them. We spent three days in the bush, there was no food, there was no water. Once we were able to get a little water from one stream. We trekked a long way before we luckily got a vehicle to take us to Maiduguri. There were many refugees.”

The government has yet to issue an official statement directly addressing the issue by name or expressing solidarity with the victims of the attacks in Baga and surrounding villages. This apparent nonchalance has stunned many ordinary Nigerians, like Lagos resident Mayowa Adebola.

“The Baga killing is one of the most tragic incidents I have ever heard of. Two thousand people were reportedly killed. I am disappointed it has been treated like this. Nothing really had happened, no relief for the victims,” says Abedola. “People are refugees in their home country, and my fear is these guys the Boko Haram guys they keep gaining ground and as time goes on if we don’t do anything, Boko Haram will just ground and Nigeria might become another Yemen.”

One of the strongest reactions to the news of the Baga massacre has come from Bring Back Our Girls, a civil society group formed after Boko Haram kidnapped more than 200 girls from a school in Chibok last year. Fatimah Abbakaka, a member of the Bring Back Our Girls, is one of many activists who say the Nigerian government has not done enough to protect its citizens.

“This is the only time that we have got our voices to challenge the government because of the social contract between us and the government,” Abbakaka said. “They have to fulfill their end of the contract that is safe guarding the security and human life and property of this country that is what the president swore to when he was given the mandate of leadership. So if the needful is not being done, fortunately we have got our voices and we know we can challenge the government to what they are doing wrong.”

Despite the declaration of a state of emergency for three states in northeastern Nigeria in May of 2013, the Boko Haram insurgency has gained strength and is expanding across borders. Chad has sent troops to Cameroon to help fight Boko Haram there after a number of cross-border raids. In its latest online video Boko Haram threatened regional neighbors Cameroon, Niger and Chad.

In the meantime, International Criminal Court Prosecutor Fatou Bensouda has warned that her office is investigating allegations of war crimes and crimes against humanity in North Eastern Nigeria.