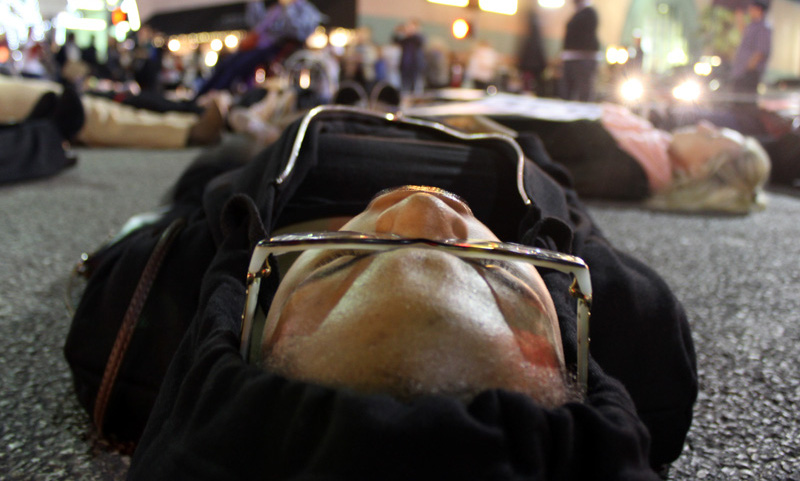 In 2015, observation of Martin Luther King Jr.’s life and death is taking on a level of intensity unseen in many years. Protesters around the country have been engaging in activism that goes far beyond floats, marching bands and dignitaries in cars. Their tactics include everything from die-ins, demonstrating at Sunday brunches, to shutting traffic down. These activists say they are reclaiming the legacy of what Martin Luther King started 50 years ago. FSRN’s Lena Nozizwe caught them in action in Santa Monica, California and files this report.

A multiracial cadre of about 40 chanting and singing protesters took over Santa Monica’s oceanfront Third Street Promenade as part of a series of actions marking Dr. Martin Luther King Jr’s birthday by celebrating his legacy of civil rights protest. They came carrying signs bearing the names of black men and women who have been killed by police.

The group marched past the promenade’s usual weekend assortment of street performers, shoppers and diners eating at outdoor restaurants.

The demonstrators came out for a number of reasons, but 21-year old Day Day Tompkins says having to live with fear motivated him to participate.

“As a black man I am kind of nervous to walk out the door I have to look over my shoulder,” he explains. “As I walk out the door my mom is kind of like nervous. My mom’s just concerned if I am going to be the next victim or not.”

Direct action during this demonstration included die ins, which have become a regular feature of protests against police killings of unarmed black citizen across the U.S.

Participants in Santa Monica fell to the ground and blocked traffic as they stayed frozen for four and a half minutes – a symbolic representation of the four and a half hours that Michael Brown’s body was left on the ground after he was shot by Ferguson police officer Darren Wilson.

The demonstrations brought applause, but there were also confrontations. Including one between angry motorcyclists who were blocked by the protesters.

Minutes later, a dancing street performer, in a shiny colorful costume, complained loudly that her performing space was being turned into into a political one. Her audience applauded.

While the demonstrators moved on, Professsor Abdullah, stopped to challenge the notion that their use of public space was inappropriate.

“Black lives matter everywhere. Everywhere. This is not a political question,” Abdullah begins. “It is about whether black people matter. Every 28 hours we are killed by law enforcement.”

“Get out of my space,” the street performer replies.

“This is not your space.”

“Get out of my performance space. You are interfering with my ability to earn a living,” she says. “Get out of here. I’ll call the cops.”

“Then call them,” Abdullah responds. “Black lives they matter here.”

“The police who kill us every 28 hours.”

“I am sorry. There are more police that don’t harm you than do,” the performer says back. “If you get your statistics right.”

“They do and they kill Hispanics too,” the performer continues. “Get out of my space.”

“This is not a political issue, this is a matter of black lives. I will stand here if I chose to stand here.”

In the end the street performer won the decibel war, thanks to her microphone, a PA system and a supportive audience.

“Basically someone was exercising her white privilege to say, to claim that Black Lives Matter is a political issue and we should not be walking through her space and that’s exactly the problem,” the professor says after the heated exchange. “That’s the problem that people don’t understand that. What if it were their children?”

Abdullah moved on to join the group at the upscale shopping mall next door called Santa Monica Place.

Demonstrators across the country have many more actions planned in 2015, a year they are now calling the year of resistance.