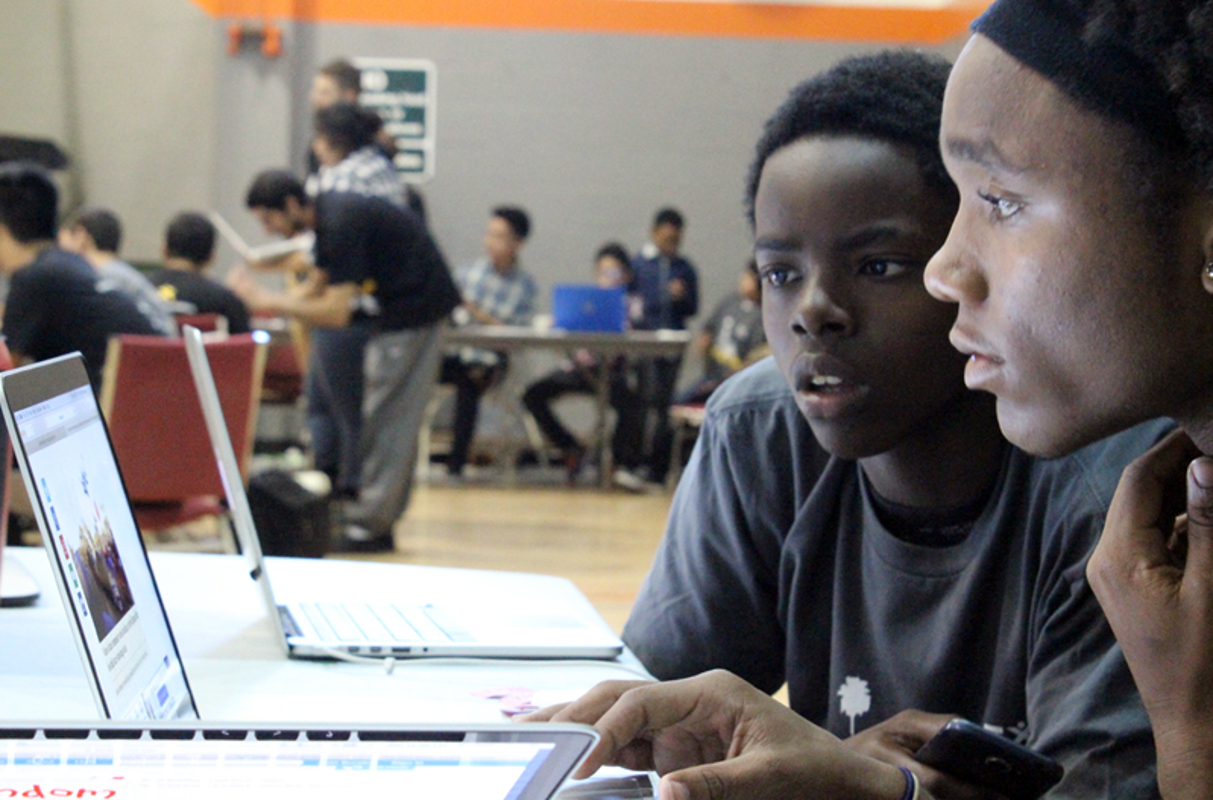 Despite years of policy debate about how to narrow the divide between the digital haves and have nots, the problem persists. The gap is also now apparent in the lack of diversity in workforces at major tech companies.

Last year, Google reported that 2 percent of their employees are black, 3 percent are Latinos – diversity demographics are almost exactly the same at Facebook and Twitter. And at all three companies, black and Latino employees often work in janitorial services.

An analysis conducted by USA Today found that black and Latino computer science and engineering students are graduating from top tier schools at twice the rate that they are hired by leading tech companies. But FSRN’s Lena Nozizwe reports that instead of being discouraged by those numbers, a Los Angeles nonprofit is one of many that is not giving up. And they have no doubt that the demand for knowledge and computers is there, even if the resources are not.

A casual voice poll of Latino and African-American middle and high school students in South Los Angeles shows many do not have a computer at home. The poll is far from scientific, but for Oscar Menjivar, it’s heartbreaking.

“I grew up in Watts and it makes me sad that, back in 1996, I did not have a computer and went to college without being able to touch a computer and still did computer information systems,” Menjivar recalls. “And then kids in 2015, they still don’t have computers at home. They are not having access to really understanding this is really their future jobs.”

Menjivar is the CEO and founder of TxT Teens Exploring Technology, a nonprofit that helps inner city kids learn technology and entrepreneurial skills. Just six months ago, Menjivar conducted his own informal survey of 135 students in South Los Angeles and found that a scant 5 percent of them had internet access at home.

The Pew Research Center found that less than 40 percent of households with an annual income of $25,000 or less have internet access at home, compared to 85 percent in households with incomes ranging from $50 to $100,000.

Menjivar is trying to narrow that digital divide and so are the Latino and African American kids gathered inside the crowded gym of a city rec room in South Los Angeles on a recent sunny weekend. The kids came for an event called the Hustle N’ Code – South LA Hackathon.

“We are helping kids understand how code can change their communities and they are doing that by learning how to code and designing products or ideas that are going to address a social issue in South LA,” Menjivar explains. “So we recruited most kids who come from the public housing so that is where they are coming from. Just bringing access, not just access to technology and the Internet, but access to coding literature and access coding education.”

Darnise, a soft-spoken 11-year-old, sits at a table at the back of the room. She already knows the story she wants her coding skills to tell. On the screen in front of her are three young ladies hanging out.

“I am going to make them like talk with each other and then one of them is going to start singing,” says Darnise. “The two best friends are going to clap for her and tell her she should be on the stage to sing and they should be her backup singers.”

Twelve year-old Darion, who sports a black and blond frohawk, flexes his coding skills at the front of the room. He is creating a website designed to help the less fortunate.

“Helping the homeless buy clothes, getting them a job, shelter and other things, making our own little website,” Darion explains.

He clearly enjoys every moment at the computer and says he and the two friends who came with him are having fun.

Darnise and Darion are among those who could not be doing these exercises at home. Neither one has a computer there.

“It makes me a little depressed how I don’t have one and many people has one,” says Darion.

Many students at the event, including Darion and Darnise, came with the hopes of going home with their own computer. Four computers were up for grabs via raffle tickets earned through coding exercises. Google virtual reality cardboard glasses were also among the giveaways.

A number of volunteers donated their time for the event—helping with everything from tutoring to serving lunch. Maritza Mendez started volunteering with TxT three years ago.

“The growth is exponential. It has significantly grown so much,” Mendez says. “Our first hackathon I would say there was probably, I would say like 30 students at the time and I mean I just arrived here but this auditorium looks pretty full right now.”

They were expecting 100 kids. The final count was somewhere around 140.

The folks behind the hackathon hope that it will serve as a springboard towards future jobs for South LA students. Despite breathtaking innovations in the tech world, there is no simple app for workplace diversity.

Studies show that staff at major tech companies are overwhelmingly white, Asian and male. That includes Google, one of the sponsors of the event, and Apple, the brand of computer brought in for the coding session.

Both corporations say they are seeking to hire a more inclusive workforce.

Menjivar, who immigrated as a child from El Salvador, says he has seen first-hand the lack of diversity in the tech field, but it does not faze him. Rather, it motivates him to prove the potential of the kids of South Los Angeles.

“I am going to be very honest. Tech companies will not be able to keep up with us as soon as we get our hands into our coding,” says Menjivar.

And he says the next time round he hopes to hold the event, not in a rec room, but at the LA Convention Center.

The turnout and growth of these events, and the clear enthusiasm of the participants, show that the bigger challenge is one of access.