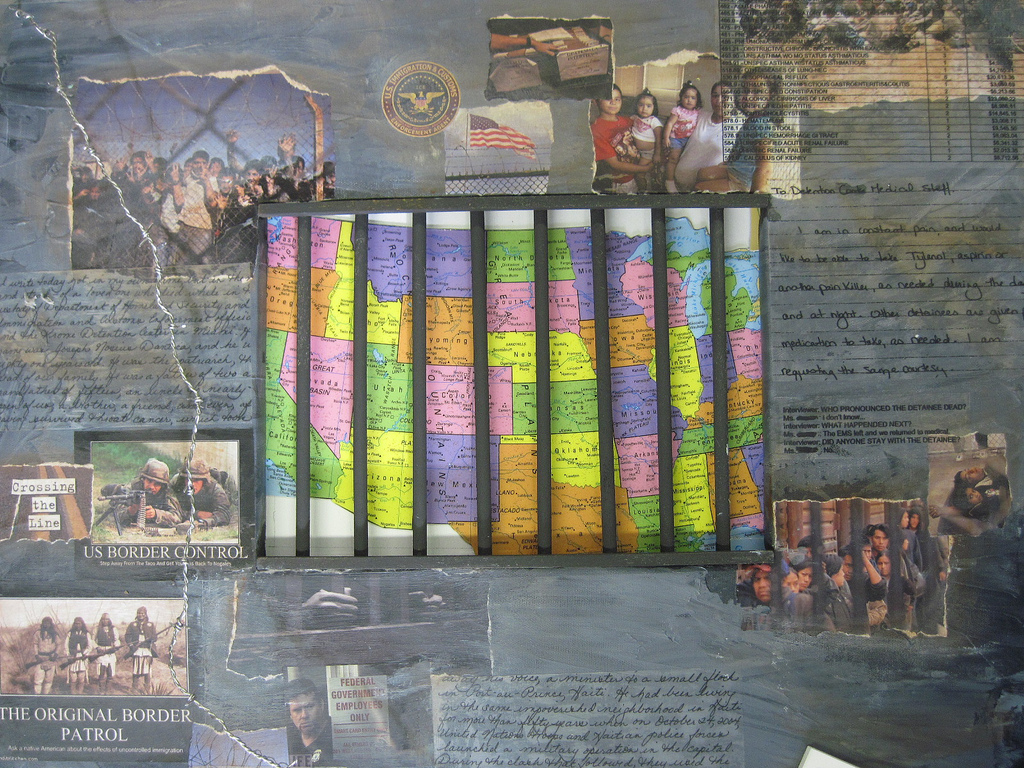 Prison officials in Texas are in the process of transferring around 2800 inmates from the Willacy County Correctional Center in Raymondville after a prisoner uprising over the weekend reportedly left the tent city prison complex “uninhabitable.”

The prison started off as a facility for holding civil immigration detainees, but lost its contract with Immigration and Customs Enforcement after repeated and persistent reports of abuse and substandard conditions. The company that owns and operates the facility — Management & Training Corp —  later won a massive contract with the federal Bureau of Prisons to hold non-citizens convicted of criminal offenses.

The uprising in the Raymondville prison camp came on the same day a federal judge ruled against holding mothers and children in immigration detention while awaiting the outcome of asylum claims.

Shannon Young: Let’s start with this weekend’s uprising at the Willacy County Correctional Center. Who were held there and under what conditions?

Bob Libal: The Willacy County Correctional Center is a privately-operated prison contracted by the Bureau of Prisons and it is one of the nation’s 13 what is known as CAR prisons or “Criminal Alien Requirement” prisons. So these are basically places where immigrants are segregated into the privately-operated prisons within the Bureau of Prisons systems.

Essentially, these facilities have become giant warehouses where immigrants are put into these privately-operated facilities that often have substandard conditions.

SY: You mention CAR prisons are under the Bureau of Prisons, but who runs them and who has oversight over these prisons?

These are facilities that have a long record of really abysmal conditions. In fact, the facility where the uprising happened this weekend was so plagued with abuse and mismanagement that Immigration and Customs Enforcement actually ended its contract in 2011, but then the Bureau of Prisons stepped in a gave this facility a new contract worth more than half a billion dollars to incarcerate 2800 immigrants on any given day in a series of Kevlar pods. The facility is nicknamed “tent city” or “Ritmo” – the Raymondville Gitmo – because of both the appalling conditions and just how huge of an incarceration camp it is.

SY: What are some of the most common complaints about the conditions there?

BL: The complaints have included a serious lack of adequate medical care. In the past, they’ve included food complaints. In fact, there was a news report from the Valley several years ago that there were maggots in the food at this facility. Again, sexual and physical abuse were reported when it was an immigration detention facility, an ICE contracted facility.

There was an exposé on Frontline about this facility and what the government did was shut it down as an immigration detention facility and then simply re-open it as a prison for immigrants that were criminally prosecuted after coming back to the country.

SY: Your organization, Grassroots Leadership, has documented a practice of building these facilities via public debt. How does that work and does it essentially make local communities have a stake in keeping these facilities open despite complaints, exposés and even uprisings?

BL: Yeah, absolutely. There has been a long record in Texas in particular of private prison corporations convincing local communities to finance the construction of privately-operated prisons with the anticipation of winning federal contracts.

So basically what that looks like is a local entity – in this case Willacy County, Texas – created what’s called a public facilities corporation and then proceeded to float tens of millions of dollars in debt, more than a hundred million dollars in debt, to build this and other privately-operated prisons.

If the private prison corporation – in this case, Management and Training Corporation – were to lose the contract, it could put Willacy County in a pretty severe economic position of having their credit rating devalued were their public facilities corporation to default on the debt. So it certainly has the impact of sort of forcing these communities into a position of having to advocate for continuing to win these contracts even when there’s a very good argument that there’s no other reason why it’s good for the county to be involved in this kind of enterprise.

SY: On Friday, a federal judge in Washington D.C. granted an injunction which put a stop – at least temporarily – to the practice of holding women and children in immigration detention while their asylum requests wind through the system. With last year’s spike in apprehensions of unaccompanied minors and women with children at the border, there were plans in the works to expand facilities to detain them in Texas. Are these plans effectively on hold given Friday’s ruling?

BL: We certainly hope so. I think that the court really rejected the administration’s argument that it could use the detention of women with their kids, of refugee women with their kids, as a deterrent measure for future migration. It also rejected the administration’s argument they could use national security as a reason to detain these immigrant families.

We’ve been calling on the administration to halt these plans to expand these two giant family detention camps in South Texas, one in Dilley that’s operated by Corrections Corporation of America and one in Karnes City, Texas which is operated by the private prison company GEO Group. Both are currently in expansion plans.

We’ve been calling since this court injunction for the administration to stop the expansion of these facilities immediately and to start prioritizing release into community-based alternatives to detention for refugee women and their children. There was never any justification for locking up little kids and their moms in private prisons and certainly the court has added to the argument that this is a practice that needs to stop.