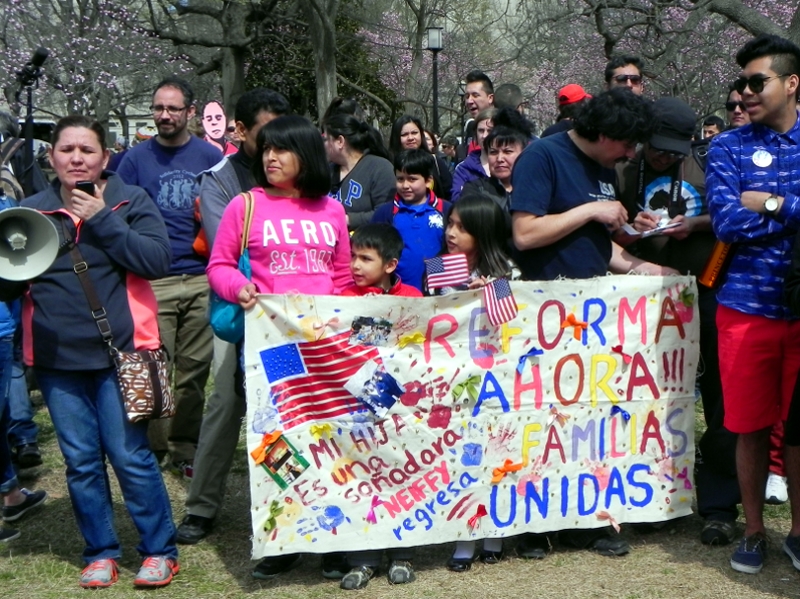 A large increase in the number of unaccompanied minors apprehended by Border Patrol agents over the past few months has prompted federal authorities to improvise shelters to hold the children while their legal status is determined. Most of the children are from Central America, and a large percentage of them were picked up in the Lower Rio Grande Valley of Texas.

Officials at Lackland Air Force and Army base in San Antonio have transformed some facilities there to hold as many as 1800 immigrant children. Other minors in federal custody have been moved to so-called National Placement Centers.

Shannon Young: First, why are we seeing such a huge spike in apprehensions of unaccompanied minors at the border? Is this the result of a specific event or is it caused by an accumulation of factors?

Juanita Molina: I think that we’ve seen these kinds of waves of migration and I think that for people who aren’t necessarily as involved in the border movement, this may feel sudden or seem sudden, but the reality is that there are many reputable academic institutions that have been doing studies about this and predicting this pattern years before.

We see everything from the United Nations to the Association of Catholic Bishops, the Jesuits, have been tracking these migration patterns and what we know is that the escalating violence and the diminishing economies of these countries in Central America are creating very dangerous situations for its people and so that’s why we see such a huge influx of unaccompanied minors and particularly young men between the ages 12 and 17.

Many of these children are being told that either they need to join the cartel or be killed by the cartel and so that’s why we see such a large influx of certain populations within the category of unaccompanied minors.

SY: Unaccompanied minors aren’t supposed to be held in immigration detention, at least not for extended periods of time. But now the federal government expanding the infrastructure of facilities in which to hold them and transferring them long distances from where they were taken into custody. Why?

JM: What we’re seeing now is a different set of motion for the federal government. Now that Obama has declared this a humanitarian disaster, we’re seeing different mechanisms come into place. One of them is the conversion of different federal properties into national placement centers. So these, theoretically, are supposed to be temporary placements.

When children are apprehended by CBP, they are essentially put into custory for 48 to 72 hours and then released to the Office of Refugee Resettlement or also to HHS. And so essentially, they’re only supposed to be in this temporary custody for a very brief period of time, but since there’s been such a big influx, it’s created a backlog in placements for these children. So that’s where we’re seeing the overcrowding, the extension of time and facilities that aren’t necessarily equipped to care for children.

SY: What’s now the average length of time that these children are being held in custody?

JM: Now we’re looking at an average of about 14 days that these children will be in these centers. And the reality of these children’s everyday life in these centers, are their physical needs taken care of… And I can only speak to the Nogales facility and my close working relationship with CBP in the Tucson sector, and what I can tell you that it’s not overcrowded conditions, it’s relatively clean. CBP is doing everything possible to provide for these children’s physical needs, but unfortunately they’re unable to provide for the children’s emotional and spiritual needs and that’s particularly apparent with the youngest children because this is a very disorienting environment.

SY: Some advocates of comprehensive immigration reform are calling on Congress to do away with the so-called bed mandate which calls for ICE to have enough resources on hand to be able to hold 34 thousand immigrants in detention each night. The appropriations bill now before Congress actually increases the budget for ICE detention and also expands funding for the transportation of unaccompanied minors. Are these children becoming the new commodity in the business of immigration detention?

JM: Unfortunately, I think that the trends are all indicating that that will be the case. The Prison-Industrial Complex in this country is a strong lobby within our political system. And so it’s every sad to see people’s lives compromised on this level.

We’re talking about a generational footprint, an impression on thousands of children and families and communities that will become very difficult for generations to come. This is where it really is a tragedy to see this. And as we see influx of children that are fleeing such extreme violence that they are risking their personal safety and their lives to come to this country. And I hope and pray that our country will have the appropriate response for these children and really take their safety into consideration.

SY: If you could make some concrete recommendations to the federal government regarding how best to deal with this situation, what would you say?

JM: Not to recreate the wheel. There are so many organizations that have dealt with these issues on global levels and I just hope that the United States rises to the challenge and following the outline and recommendations that exist from the Children on the Run report from the United Nations and to really embrace those comments and implement them in our system.

SY: That was Juanita Molina of the Border Action Network, joing us by phone from Tucson, Arizona.