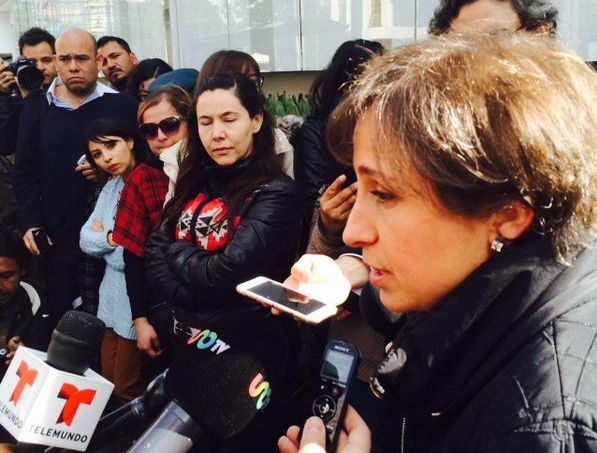 The sudden firing of a top Mexican broadcast journalist who broke a string of major corruption stories has become a national scandal, with many suspecting the order may have come from the highest levels of government. Shannon Young reports.

Listeners tuning in Monday morning to hear the hugely popular newscast hosted by Carmen Artistegui were in for a surprise.

Aristegui, arguably the most trusted broadcast journalist in Mexico had been replaced. During her usual time slot the MVS network rotated a canned spot announcing that Aristegui had been terminated. The action followed her insistence that the network reinstate two of her key staffers who helped to break stories that turned into major corruption scandals.

Aristegui says she suspects the order to fire her came from the highest level of government.

Late last year, Aristegui’s investigative team broke a story about a $7 million mansion built by a favored government contractor for the president’s family. The team was also working on an investigation into the Finance Minister’s acquisition of a vacation home built by the same contractor.

But according to the network, MVS, the conflict began March 10th with the launch of a new online platform called MexicoLeaks designed to pass documents and evidence of corruption to reporters. Aristegui’s investigative team was among a handful of journalists and outlets who partnered with the whistlebower site.

The network quickly and publicly distanced itself from MexicoLeaks, releasing a statement saying that its brand name had been used without permission. Days later, the network fired the head of the investigative unit and a reporter. The two were reportedly prevented from recovering their work from office computers in what has become the 21st century equivalent of cleaning out one’s desk.

Possibly unaware that the Friday, March 13th broadcast would be her last at MVS, Carmen Aristegui told her audience that the fired staffers were in the midst of two important investigations and urged the company to hire them back. The company called that an ultimatum and cited it as the reason for her dismissal.

Aristegui’s abrupt removal from her prime-time morning spot on the national airwaves has left a gaping hole of information for audiences who get most of their news via the broadcast media.

Interest in her next steps has been so intense here that she had to cancel a Thursday afternoon press conference at a Mexico City museum because the number of journalists and supporters who showed up couldn’t fit in the museum’s auditorium.

She instead held a press conference on short notice later that night via video stream. She took questions over Twitter and more than 77,000 viewers tuned in live via her YouTube channel.

Flanked by fired members of her team, including the children’s segment producer, Aristegui said she’s convinced the reasons given for the dismissals are pretexts and that the family that owns the network must be under severe external pressure to dismantle the top-rated flagship newscast they helped build.

Aristegui was by far MVS’s biggest on-air personality and routinely asked officials tough questions in live interviews and invited on guests often locked out of media discourse. In her press conference, Aristegui said she’s not willing to walk away from her project without a fight.

“It’s not just the relevance of having built up over the course of six years an audience, a team, a set of circumstances that we want to preserve, but that we don’t want to accept that it can be wiped out with the slap of an authoritarian hand,” said the journalist. “This isn’t just about out program, it’s not just our work, but rather it’s the ominous sign that this can happen. The message to other journalists is quite serious. And for this reason we believe that we have to put up a fight to prevent a  situation which could only be well-received by authoritarianism.”

Shortly after Aristegui’s press conference a representative from MVS held an “information session” to clarify that the decision to fire the star anchor is final. The corporate representative read from a prepared statement and took no questions.

Community radio stations are rare in Mexico and the listener-sponsored model is virtually non-existent.  But many here now wonder if, faced with closed doors, Aristegui will draw on her star power and large, loyal listener base to forge a new path in Mexican media.