From anarchists to bankers, Greece’s SYRIZA-led government digs in 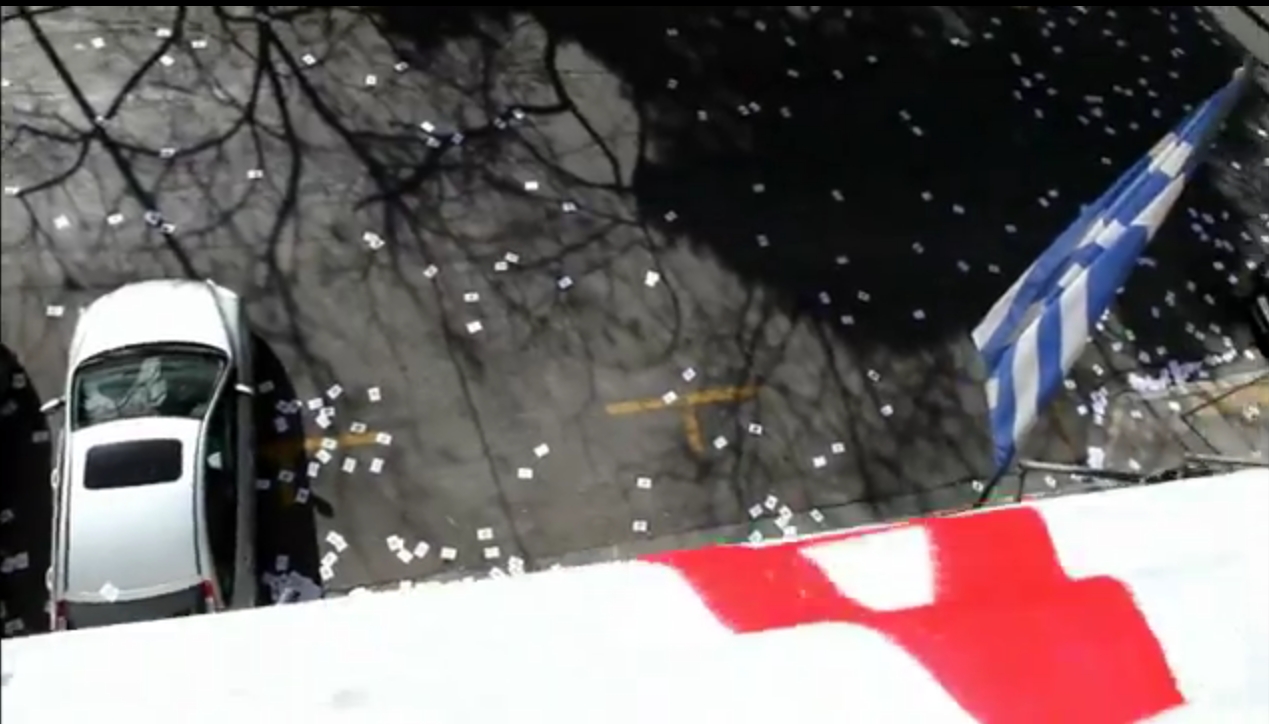 Screenshot of video of the occupation of SYRIZA party headquarters. (Video uploaded by YouTube user Perseus999)

The left wing-led government of Greece is digging in its insistence in restructuring its crippling debts that have plunged the country into a humanitarian crisis. Four years of imposed austerity measures have seen massive cutbacks in public spending and soaring unemployment. Jacob Resneck brings us this update.

The week got off to a dramatic start after scores of anarchists stormed the ruling SYRIZA party’s headquarters in Athens and occupied the building for several hours into early Monday morning.

Police stood by as the activists filmed themselves unfurling banners and dropping leaflets from the rooftop in opposition to the continuation of the previous government’s program to build maximum security prisons. The group posted these sights and sounds to YouTube demanding a release of political prisoners and repealing counter-terrorism legislation.

Greek investigative journalist Yiannis Baboulias has written on the controversial lockups which he says contravene basic standards of justice: “They are meant to hold what a lot of people think of as political prisoners – people who have been convicted under counter-terrorism laws and sometimes the way they are arrested and the way they were targeted is quite controversial.”

Meanwhile, the SYRIZA-led government has been locking horns with its international creditors as it tries to negotiate a deal before the country goes broke at the end of the month. Greece is struggling to repay 270 billion dollars worth of bailouts received four years ago.

“We can no longer pretend that there is no humanitarian crisis in Greece,” remarked Greek Prime Minister Alexis Tsipras during a speech Thursday in Paris. “We can no longer pretend that the country’s public debt is viable and serviceable, when it stands at around 178 percent of GDP.” He said there would be no more deals with the unpopular troika of creditors from the IMF, European Commission and European Central Bank.

Critics of the leftist-led government had predicted that the coalition would implode. But Baboulias says the government has proven mature enough to endure criticism from the left and right as it focuses on confronting Greece’s economic crisis. “The very fact that they were allowed to occupy a headquarters of a party without the police intervening already shows how different SYRIZA is to the previous government,” he told FSRN.

Meanwhile another controversy has erupted with Germany after the SYRIZA-led government said Berlin should pay reparations owed to Greece for the destruction wrought during the Nazi occupation in World War II.

The Greek leadership has threatened to seize German state-owned property if an agreement isn’t reached, another indication that major disagreements within the European Union have deep historical, as well as ideological roots.