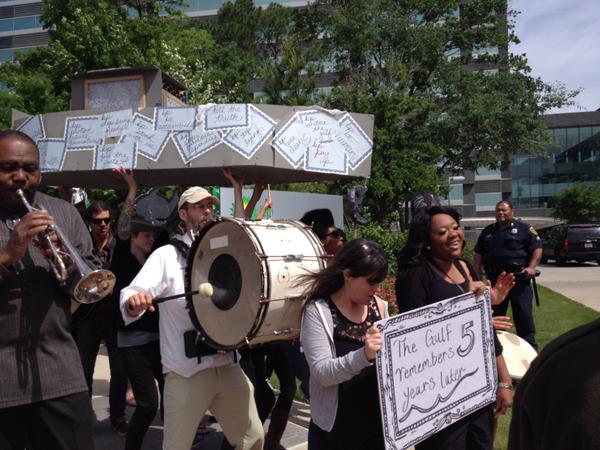 It’s been five years since an explosion on the BP-owned Deepwater Horizon oil rig led to the blowout of a deep water well in the Gulf of Mexico, resulting in the largest marine oil spill in history. To mark the occasion, members of affected Gulf Coast communities gathered outside of the BP offices in Houston to call for restoration, to take stock of the damage in the years since the disaster, and to reaffirm their shared struggle moving forward. FSRN’s Shannon Young spoke with Jayeesha Dutta, Coordinator of the Gulf Future Coalition for more on the environmental justice movement emerging in the Gulf Coast states.

Shannon Young: You are in Houston today, five years since the start of the BP oil spill disaster. How did you and other Gulf Coast residents mark the occasion?

Jayeesha Dutta: We had an interfaith memorial service and jazz funeral today at the BP headquarters. We had fishermen from Galveston and Mississippi here. We had folks from Mobile, Alabama. We had folks from all over Louisiana, Houston folks, so really people from all across the Gulf Coast. We even had some people from North Carolina and Appalachia and Wyoming and California to be with us today and tell BP that things are not right and five years later, we still suffer lots of harm and economic losses, environmental losses, health – people are continuing to die – so we wanted to mark the occasion with a pretty solemn affair, but also something that would united us, bring us together as a community because we know that together we’re strong and we’re powerful and we know that if enough of us continue to come together in ways that build power, we can fight these corporations.

SY: Today’s events in Houston are part of a larger context of actions carried out in the run-up to the anniversary. What else has been happening on other Gulf Coast communities?

JD: Yeah, this is part of a week of action that started on April 15th in solidarity with the “Fight for 15” with the economic justice issues as essentially interwoven with the issues that we’re talking about when we talk about the BP oil disaster. We’ve had throughout the week, events across all five Gulf Coast states. In particular, there’s been a series of boat trips led by Thao Vu from the Mississippi Coalition for Vietnamese-American Fisher Folks and Families. And she has been bringing decision makers and media out on boats, into the water, for them to see for themselves, first-hand the impact of the oil disaster and how the fisheries are collapsing and how these folks who are completely dependent on the waters are finding that they’re not bringing in the same number of crabs and oysters and fish as they did prior to April 20, 2010.

We’ve also had a family fest happened here in Mason Park in Houston. We wanted to have an event to bring together families that maybe wouldn’t be able to take off a day of work or school to be with us today, over the weekend. And “Cry You One” is performance that comes out of southeast Louisiana, a couple of New Orleans theater groups that are part of the Gulf Future Coalition put on a full-scale performance in Mason Park. And so, that performative aspect and kind of the arts-based aspect is also part of our week of action.

So we’re really trying to see action as being not just things like rallies, but also things like bringing community together, experiencing art that is trying to say something about the conditions that we live in. So really, bringing together community through a variety of means. So this week of action, we’ve really tried to highlight that.

But there’s a lot of different ways folks can engage and rise up and that’s one of the big, central messages of the Gulf South Rising movement initiative that we’re launching this week. It goes from now until the end of the year, in particular with the ten year observance of Katrina and Rita in August and September. We really see this movement as continuing and we hope to bring a delegation of Gulf South residents and citizens and tribal members to the climate negotiations in Paris at the end of the year. So, this is the beginning of a trajectory of movement-building and we’re looking forward to that continuing from now until the end of the year.

SY: One of the stated goals of the Gulf South Rising movement is to shift narrative away from one of resilience to resistance? Can you explain a bit more about why?

JD: The term resilience is one of those terms has really, we feel, been overused and at this point, particularly in this region, where folks are still recovering from Katrina, from Rita, from Isaac, from the BP oil disaster. The term is being now used by decision makers and corporate criminals to say: “Well, whatever happens, they’ll come back up. We can just continue to push on them and extract from them and not do right by them because they are resilient.” And what we want to say is that, as a region, we are resistant. We are not going to take that kind of treatment any more. We are not going to accept the fact that the resources that need to be invested in our region are not being invested because we are “resilient.” That’s not OK.

We need to see significant infrastructure. We need to see the East Coast, the West Coast, the Midwest, the other parts of this country that benefit from all of the resources of this region, they need to start realizing that if they don’t shift their ways, we are going to continue to suffer things like the BP oil disaster, the impacts of climate change, land sinking in Louisiana.

So we really want to say that our resistance movement is about not only for us to say no to the corporations and to the folks that are extracting from us, but also to resist this narrative that has emerged that resilient communities can take anything. Yes, we are strong, but we are resistant.

Resilience is not a term to be used for us to be exploited. We’re rising up, were fighting back and we are ready to build a movement; a movement here that is rooted in the longest legacy of movement building in the country comes out of the South. And so, we really want to honor that legacy and continue that fight that has never really ended.

Jayeesha Dutta of the New Orleans-based Gulf Future Coalition. She joined us by phone from Houston, Texas.