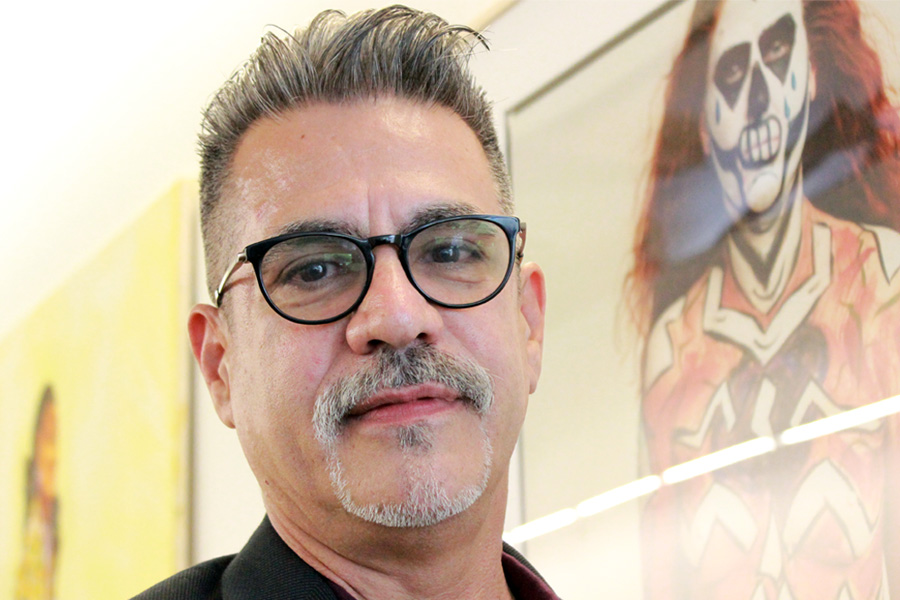 Visual artist Joey Terrill advocates for people with AIDS through his art and through the AIDS Healthcare Foundation. His work, featured in "Art AIDS America," is as colorful as it is political and it is served up wrapped in the guise of pop art. (Lena Nozizwe copyright 2015)

Thirty-four years ago this month, the Center for Disease Control’s Morbidity and Mortality Weekly Report published a piece about five cases in Los Angeles, California of a type of mysterious infection. The disease later became known as HIV/AIDS.

The CDC estimates since then more than 658,000 people diagnosed with AIDS in the United States have died. That staggering number has had an impact on virtually all aspects of American life, from medicine, to romance, to the economy and even art.

The city of West Hollywood, California is hosting a preview of the traveling exhibition “Art AIDS America” through September. From there it will travel to Tacoma, Washington, for the first stop of the show.

Despite the effects of AIDS on the art world, the show’s curator says it remains a relatively taboo topic for an exhibition. FSRN’s Lena Nozizwe reports.

The imagery in the “Art AIDS America” exhibit ranges from horses without riders, to an abandoned distressed couch, to two men in a boxing ring wearing patriotic gloves as they hold on to one another.

The show includes works from familiar artists, such as Keith Haring, Annie Leibowitz and Robert Mapplethorpe.

Katz says the art establishment is loath to acknowledge the strong connection between AIDS and art, which made curating the exhibition a challenge. “Just to give you an idea we proposed to 200-plus museums only to be told no,” he remarked to FSRN. “We had major artist foundations say they would not allow their work to be in an AIDS show even though the artist had AIDS, died of AIDS and made work about AIDS.”

He attributes the rejection of gatekeepers  to concern about artist branding.

The response was quite different from artists contacted directly to be a part of the show. Fine arts photographer and filmmaker Ann P. Meredith says the invitation was an emotional experience: “I cried. I mean so many artists work so hard and often alone. It really matters to me to be a part of an organization, to be part of an exhibition and to be with other artists in collaborations still fighting against AIDS.”

Self-described Chicano artist Joey Terrill said he was, “ecstatic to be considered for part of this show for a number of reasons.”

When asked to give his top reason, he responded with a personal story: “First of all for full disclosure, I have been living with HIV for 35 years. Asymptomatic. And unlike most of my other artist friends who are all dead I am still here and I feel an incentive to tell their stories and share their work and being in this exhibit has allowed me to do that.”

The painting Terrill shares in the exhibition tells the collective story of AIDS via a colorful, pop art still life that puts living with AIDS in a domestic setting. Most of the objects on the table are instantly recognizable, including a Hershey’s Bar, Heinz Ketchup and a bag of Jolly Green Giant peas. But you might not recognize that the oversized pills also on the table are emblazoned with the name of a major supplier for HIV meds. They are right next to a bunch of flowers that also have a deeper meaning.

“With the bouquet of forget-me-nots in the middle of the still life, it’s referencing forget-me-nots a flower that’s used in marriage bouquets or indicating romance, in the age of marriage equality,” he said. “But in the piece, instead of it being tied with white or blue ribbon, it’s a red ribbon.” That is a nod to the iconic AIDS red ribbon, used to symbolize awareness of the disease and support for those living with it.

The CDC estimates that there are more than 1.2 million people  who are HIV-positive in the United States…and one in seven are unaware of the infection.

The organizers of “Art AIDS America” hope that artistic noise will equal life.