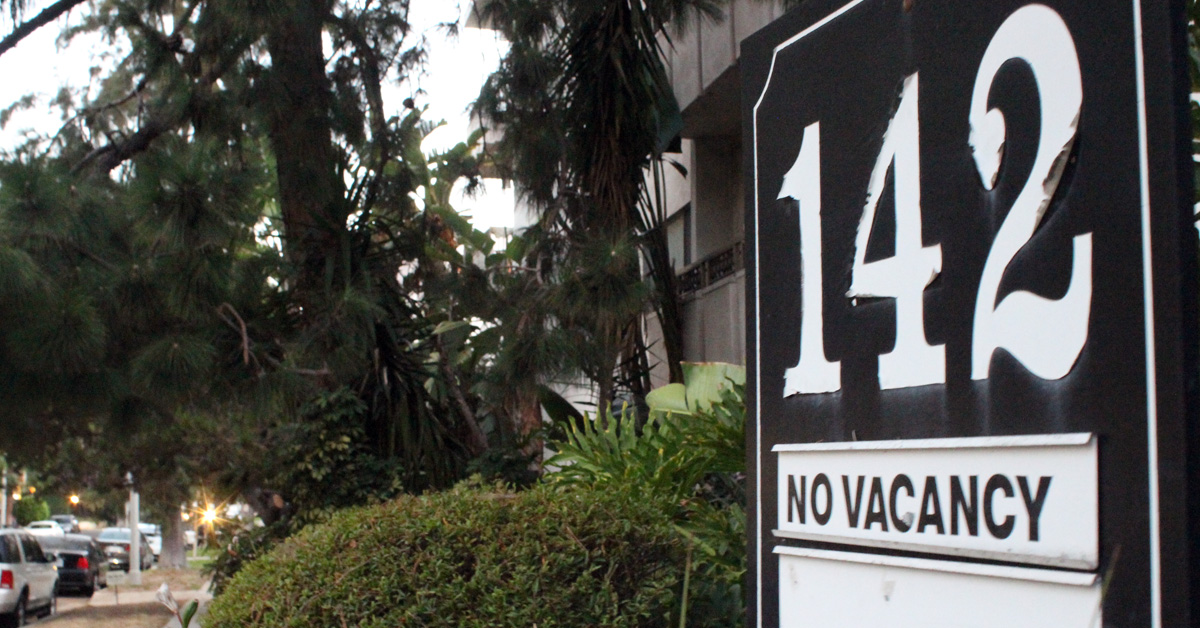 A "No Vacancy" sign on a rental property. (Photo credit: Lena Nozizwe)

More than 110 million people in the United States are renters – a reflection of how the American dream of owning a home has increasingly become a fantasy. And many of those renters who cannot afford to buy a house are straining to pay rents that consume more and more of their incomes. According to Harvard University’s Joint Center for Housing Studies, one-quarter of renters in the U.S. pay more than half of their earnings on housing. Numbers like that have prompted a coalition of activists to band together for a National Renters’ Day of Action today in response to what they call a state of emergency. FSRN’s Lena Nozizwe reports from Los Angeles, a city described as the least affordable in the country due to the combination of low wages and increasingly higher rents.

For thirty years, Anne has rented an apartment in the Los Angeles community of Harbor City. But now she says her landlord, “wants us out, he wants to raise the rent, he wants to upgrade.”

For some of her relatives, including her 27-year-old aunt and her own two young children, the apartment is the only home they have ever known.

So the thought of being without it keeps her up and night: “I can’t eat, I can’t sleep.”

Anne – a pseudonym — says her family has paid their bills on time over the decades of living in the apartment in Harbor City, where more than half of the residents are renters. And she says for years now the landlord has been trying to get her family out of the apartment without just cause.

“Families are being pushed out, illegally a lot of times – tactics that landlords are using,” explains Elsa Chagolla, the Executive Director of Inquilinos Unidos – Spanish for Tenants United. “Once they move out, it is really is hard for them to find somewhere to live in their community, that they have been living there for many years, that is affordable for them.”

She says her organization has been empowering low-income residents of Los Angeles to find affordable and safe housing since 1979, but that it has never been more difficult to do so.

“The crisis is due to two things: low incomes and high rents,” notes Chagolla. “What we are finding in the city of Los Angeles is that 60 percent of residents renting end up paying nearly 40 percent of their incomes towards rent, which leaves you little else for anything else, if you’re spending all your money on rent.”

That’s been a struggle for a renter named Paul who says a disability forced him into a low-income rental unit he can barely afford, despite its government subsidy.

“When I went on disability, the amount of money that I was getting was a drastic difference,” Paul recalls. “They charged me 30 percent of my income, which is less than $300. I cannot afford to move.”

He says he has been stuck in a LA Housing Authority building for seniors in West Hollywood which flooded twice last fall. The water and resulting damage displaced renters, forcing them into hotels, through to March of this year.

Paul says some his fellow renters did not survive the stress of the sudden moves.

“When we came back, I found out that eight people the first time had passed away. I had seen people during whole process, the older people – one woman she was okay,” Paul recalls. “When we got to the hotel though she became very confused, didn’t know who people were, didn’t know who I was and we were very close. She died, I think, two weeks later.”

Paul says his health has also been affected and that he now sleeps on a sofa near the door because of worries of more flooding.

Gloria, who has been living in an apartment in the neighborhood of Studio City for 22 of her 54 years, is facing another fear factor: eviction. She lost her job in March.

“I want to keep my home,” Gloria says through tears. “I want to take care of the ones I love.”

Gloria has been unable to find work and after running through her savings she has not been able to pay her August or September rent. She and her three rescue cats face eviction. She believes there should be a legal recourse in place to protect longtime tenants from quick eviction. Gloria is finding that help would only become available to her if she became homeless.

“Wouldn’t you want to keep someone like myself from becoming homeless?” asks Gloria. “Wouldn’t that be a better use of the resources dealing with the blood once it’s already a gaping wound?”

The situations of Gloria, Paul and Anne are not unique to Los Angeles. In cities across the country, rents have skyrocketed in relation to stagnant wages. Homelessness has hit record highs in some cities with social safety nets unable to handle the increased demand for services.

To put the brakes on a financial free fall before hitting rock bottom, some renters are organizing. Chagolla’s Inquilinos Unidos is part of a coalition of some 40 other organizations in Los Angeles behind this week’s National Renters’ Day of Action.

“We hope that this day brings awareness of the issues that renters throughout Los Angeles are facing, and throughout the nation. This issue of affordability is not just one in Los Angeles,” Chagolla points out. “Our fellow community organizations in the Bay Area are also facing some other things. Our fellow renters in New York are also facing similar issues of not being able to afford to live in the cities that their children have grown up in and they’ve have lived in for many years. So this is why Inquilinos Unidos is participating on this day.”

Housing activists from more than 50 other cities around the country say it’s time to take action against a crisis of evictions, rising rents and displacement. They hope that showing their strength in numbers will be a first step towards meaningful policy changes they say are past due.