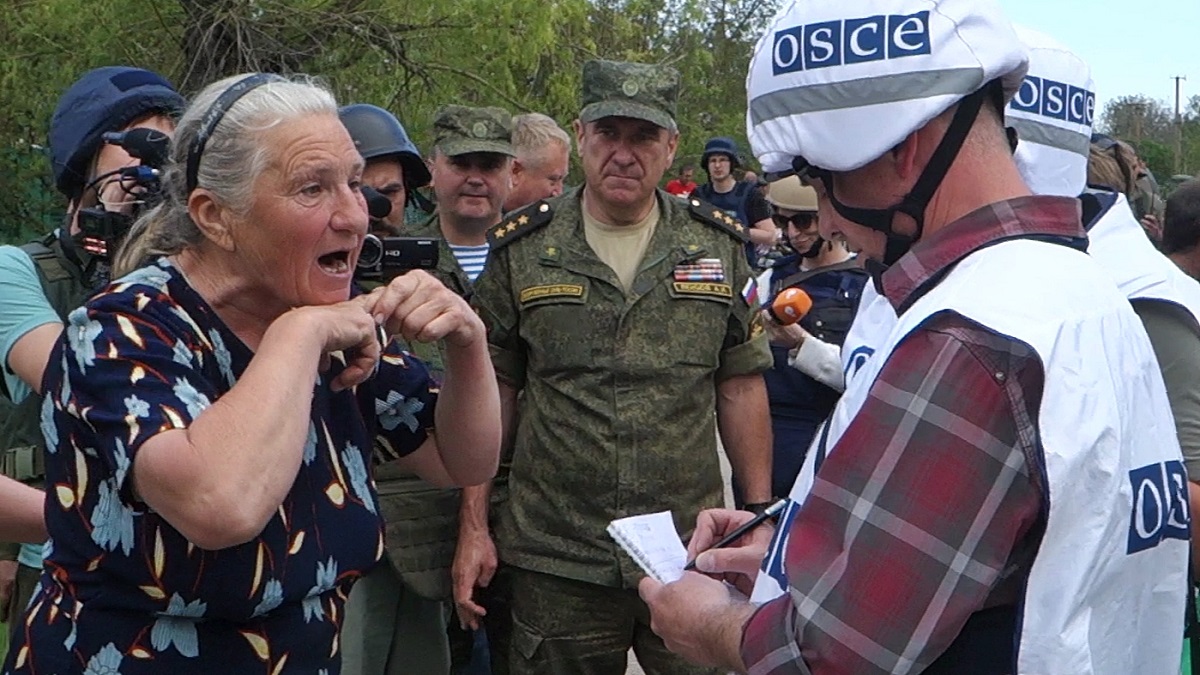 The United Nations released a report on the ongoing conflict in eastern Ukraine Monday, saying almost 6,500 people have died since mid-April and nearly 16,000 have been injured. The UN report documents serious human rights abuses by both pro-Russian separatists and Ukrainian forces including arbitrary and illegal detentions, torture and human trafficking.

Separatists currently control parts of the region also known as the Donetsk People’s Republic; a self-proclaimed state not recognized by the international community. But despite a ceasefire accord known as the Minsk protocol signed in February, fighting continues between the Ukrainian army and pro-Russian separatists in various front line hot spots. Five million people live in the conflict zone, and FSRN’s Filip Warwick traveled through the region to see how civilians there are faring.
Download Audio

In the village of Sakhanka, on the shores of the Azov sea and about 16 miles from the Russian border, people are out in the streets – some are crying, others are visibly shaken.

Overnight incoming mortar fire damaged a number of buildings in the village. The situation is tense as the Organization for Security and Co-operation in Europe, accompanied by Russian military officers, talk to locals.

“God be with you when you leave … but we would want, for at least one night, you to stay over and see for yourself what it means (to be under fire),” says Tatiana Dimitrevna, who lives here in Sakhanka as she confronts the Deputy Commander of the Russian Ground Forces.

There is a ceasefire in effect here under the Minsk II agreement reached last February, but so far it has failed to take hold. The Ukrainian Ministry of Defense set up the Joint Center for Control and Coordination, or JCCC, including Ukrainian and Russian military officers who monitor the implementation – or lack thereof – of the peace deal. A JCCC official says clashes between Ukrainian forces and pro-Russian separatists have recently become more intense.

The director of Sahanka’s school confirms the uptick in shelling.

“The firing has become worse over the past three days,” school director Oksana Victorovna says. “We don’t know what types of weapons are being used but they are heavy. The noise has become more and more loud. When the shells fall buildings vibrate from the shock-wave. We hide in basements and everything shakes.”

Before the hostilities Sakhanka was home to about 1200 people, now only about half of them remain in the village.

“The school was open until it got hit by a shell,” Victoranova recounts, going on to explain why she stays in the battle torn village. “We can’t simply leave the children who have remained behind with their parents. There are still around 20 children left in the village. Before the conflict we taught 120 children.”

Birds tweet as heavy street weapon fire is heard on the outskirts of Donetsk. The Ukrainian government claims to have lost control of 28 towns and villages since February, 2015. Sakhanka is just one of many hot spots along the front line; 60 miles to the north in Donetsk intense clashes continues around the airport area.

Luda Krashevskaya is a pensioner living in Donetsk. She shares her temporary accommodation with two other displaced locals. Standing outside a Soviet built block building used formally as a residence hall for local students, Krashevskaya explains that she used to live in the northern part of Donetsk. It was there where heavy clashes between Ukrainian government forces and pro-Russian separatists were the fiercest.

“On the 24th of January the doors and windows were blow out,” she remembers. “We fixed that up, I thanked God for that. But on the 1st of February two shells landed and everything burnt down. My son’s personal items, documents, clothing, everything got burnt.”

At the temporary accommodation the damp and cramped living conditions aggravate her health. A few months ago Kiev stopped making pension payments to retirees in separatist controlled areas like Donetsk – and local retirement benefits are only paid intermittently.

“From September until April, I did not receive my pension,” Krashevskaya says. “In December the DNR gave us 1000 hryvnia as financial assistance. But for drugs I need around 700-800 (per month) because the drugs are expensive.”

To make matters worse, the amount of the pensions paid in April were tied to Ukrainian prices. But in the Donetsk People’s Republic, or DNR, costs are 50 to 75% higher than those in Ukraine, and when medications are even available, pensioners simply cannot afford them.

There is some small humanitarian aid provided by Donetsk authorities to be found, but Krashevskaya says it’s difficult to sign-up. Ukrainian billionaire oligarch Rinat Akhmetov also provides some help, but recent deliveries have been smaller.

“Recently they’ve reduced the package size by half but thank God that buckwheat is still included,” the elderly woman says.

Pensioners are aware they cannot afford the range of food and medicine they used to. When it’s not the availability of stock, then it’s the issue of affordability.

Dr. Natalie Roberts, emergency coordinator for Medecins Sans Frontieres, has been in eastern Ukraine for the past 3 months and explains current health issues affecting the population.

“We really find that the main crisis in health care is chronic diseases,” Dr.Roberts explains. “The common diseases you see in elderly, particularly in this region, it’s hypertension, diabetes, heart disease and all these cases would normally receive treatment but during long period of fighting would not access the treatment they would normally have, they start to have complications. So they are less and less mobile and less and less well.”

With the younger population having decreased in size and clashes continuing along front line hot spots, the elderly who have stayed behind either feel less able or less willing to leave the area.

Luda Krashevskaya says that there are many empty houses and flats in Donetsk. If an opportunity presented itself she would gladly leave her temporary accommodation. She doesn’t believe she’ll see her house rebuilt again but cannot image living in cramped conditions till the end of her years.

“Soon I’ll need a cane,” she fears. “I don’t want to die in this room, I want to, at least, to live my final years in decent conditions as human being.”