Photo Essay: Nationalism and wariness on display in Crimean peninsula 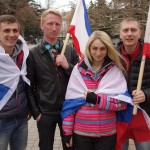 Waving the Crimea Autonomous Republic (Ukraine) and Russian national flag doesn’t mean secession, this group of friends from Crimea’s provincial capital Simferopol said Sunday. They want autonomy and respect for their rights as ethnic Russians, not war with Ukraine which they consider a brother nation. 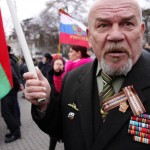 A Belarus Black Sea Navy veteran has come to support the Cossacks during a public ceremony. As a pro-Russian sympathizer, he is wearing the orange and black colours of Russian military valour with words “Sevastopol 1942 – We Remember” and many other medals awarded to Red Army soldiers for outstanding bravery and resourcefulness leading to a battle victory. 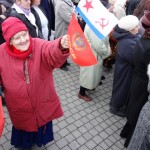 Many ethnic Russians in Sevastopol they see Russia’s incursions into Crimea as a way to safeguard the region’s autonomy which they view is being threatened by Ukrainian nationalists in the caretaker government. 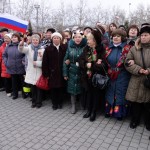 The people of Sevastopol came out in the hundreds to support the Cossacks during a public ceremony. Russian nationalism remains high among ethnic Russians who distrust far-right nationalists who had a visible presence at Kiev’s independence movement, EuroMaidan. 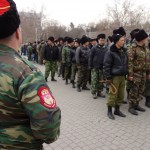 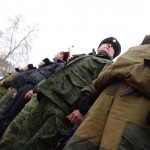 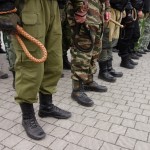 Wielding traditional bullwhips, a detachment of volunteer Kuban Cossack militia stand at attention after arriving Sunday to Sevastopol from Russia’s Black Sea coast. Their commander said they had arrived at the invitation of Crimea’s newly installed pro-Russia authorities. 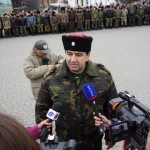 Surrounded by reporters from the Russian and local Crimean television and radio stations, the Kuban Cossacks’ leader, Col. Sergei Savonin Yurievich, says his men have come to protect Sevastopol’s population from unspecified threats. 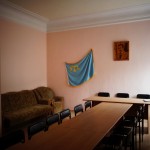 In a committee hall, two items stand out in the conference room; the light blue Crimean Tatar flag with its golden tamga (stamp, seal) and the portrait of Bekir Çobanzade; one of the Crimean Tatar greatest statesmen, intellectuals and poets. 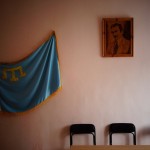 In 1944, Crimean Muslims under Stalin’s orders were subjected to mass deportation and some two hundred thousand were transported to Uzbekistan and Kazakhstan. About half died of disease and malnutrition – no other Soviet nationality suffered to the scale of the Crimean Tatars. 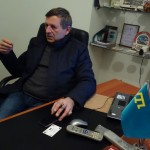 The political leadership of the ethnic Tartars supported the protester-led “Maidan” movement in Kiev. They say there is no threat and are suspicious of Moscow’s intentions given their difficult history under Tsarist Russian and later the Soviet Union. Ahtem Chiygoz is the leader of Bakhchisaray’s traditional Tartar council. 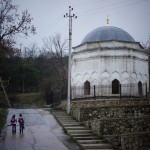 The town of Bakhchisaray was once the former capital and the centre of public, cultural and religious life of the Crimean Tatars. 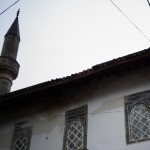 Deported by Soviet authorities in the 1940’s it was not until the beginning of the Perestroika followed on by Ukrainian independence that Crimean Tatars returned from exile to their homeland. As a way of reclaiming their national, cultural and religious rights many of the mosques are gradually being restored after many decades of neglect. 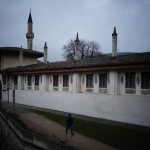 The Bakhchisaray palace of the Crimean Khans was the main residence of the state power for hundreds of years. After years of cultural non-existence under the Soviet government, Bakhchisaray is slowly coming to terms with its regained Crimean Tatar history. 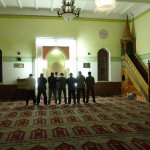 Islam is the biggest minority religion in the Ukraine and of the half a million registered, more than half are Crimean Tatars. 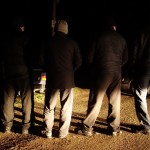 Unarmed Crimean Tatars have set up many neighbourhood watch groups that observe passing vehicles day and night in order to protect their families. They observe for suspicious groups and vehicles ever since Ukraine’s Crimean region, including the town, was overrun by pro-Russian forces. The forces have no insignias and have surrounded the town’s Ukrainian troop garrisons.