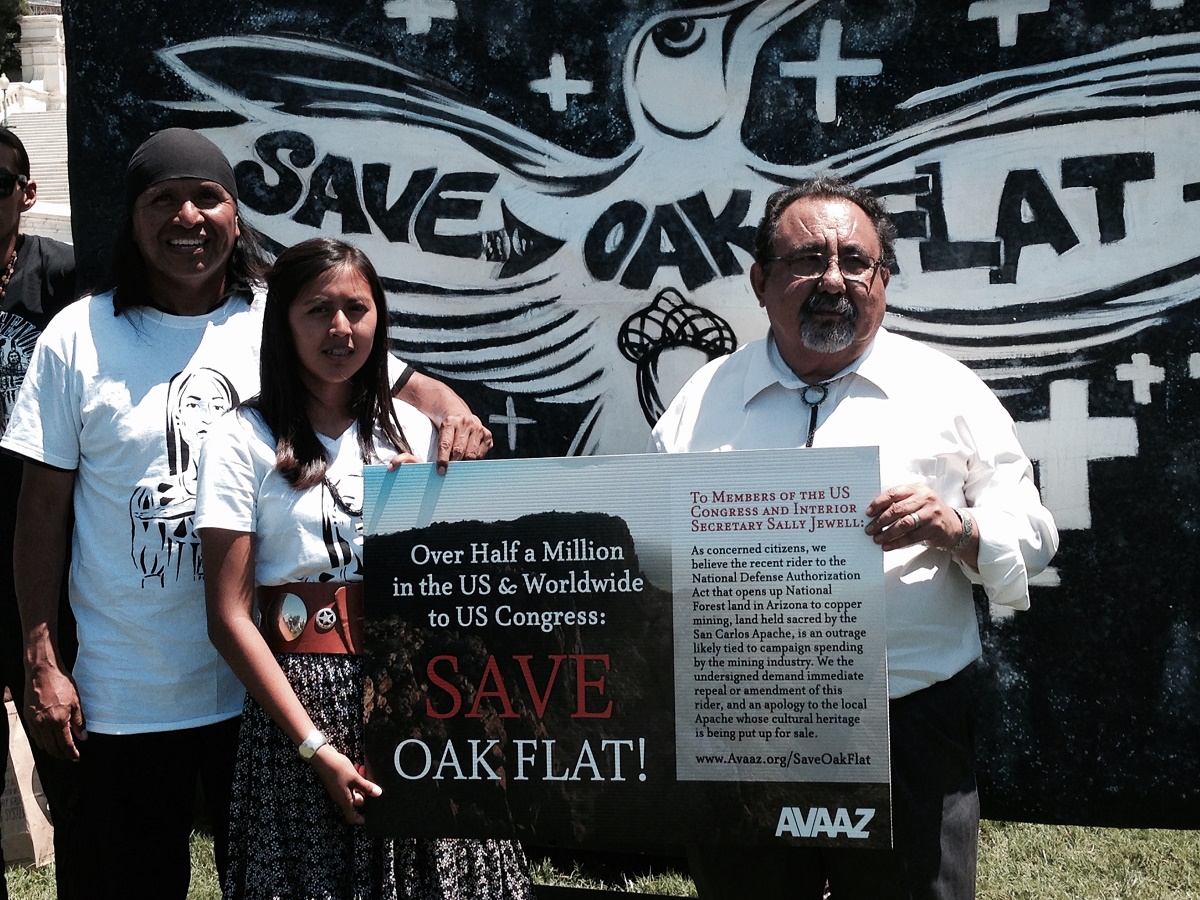 After traveling across the country by caravan for the past few weeks, a group of about 100 Apaches and their supporters rallied in Washington, D.C. Wednesday. They’re drawing attention to move to reverse a land swap deal that was slipped into to the National Defense Authorization Act passed last December. The deal gave land in Arizona held sacred by the San Carlos Apache to a foreign-owned mining company that plans to develop an enormous open pit copper mine on the site. And critics say the legislative sleight of hand used to push the land swap through Congress threatens the protection of public lands all over the country. Melinda Tuhus reports.

A few hundred people gathered on the west side of the Capitol building, some women dancing while men beat the drums. Each person on the caravan introduced himself or herself by tribal affiliation, most speaking in their native language as well as English.

They’re trying to save 2,400 acres of federal land known as Oak Flat that’s been used for centuries by the 15,000-member San Carlos Apache Tribe for sacred ceremonies and for gathering oaks, herbs and other foods. It was set aside by the Eisenhower administration in 1955 for the tribe’s use due to its cultural significance. But it’s not part of their reservation, so the land was vulnerable to a land swap proposed by the Resolution Copper mining company, which is a subsidiary of the Australian mining giant, Rio Tinto.

Arizona’s two U.S. senators, John McCain and Jeff Flake, slipped a rider into the 2015 defense bill passed late last year in which the company gave 5,600 acres it owned in various parcels in Arizona to the federal government in exchange for the much smaller Oak Flat parcel.

“Resolution Copper’s own plan of operation says that that land will subside — two miles in diameter, 1,500 feet deep,” said tribal Chairman Terry Rambler, describing the fate of the land if the mine goes through. “What we consider sacred — whether it be a stream, a mountain or a hill or the holy water, whatever it may be — it’s all going to get swallowed up by that giant hole that’s going to be contaminated and it’s going to contaminate everything.”

Panganga Pungowiyi is a member of the Yupic tribe from Nome, Alaska who joined the caravan in New York.

“Up in Alaska, we’ve been doing a lot of work around colonization and genocide and what it looks like to heal from that,” said Pungowiyi, who works to prevent youth suicide among her people. “Issues like suicide, substance use, domestic violence — those are all symptoms of colonialism and genocide. And so part of the issue is connectedness to land, subsistence rights. All of those are part of a healthy cultural, ethnic identity.”

According to Brian Howard, a legislative associate with the National Congress of American Indians, nearly 100 land bills were included as riders in the defense bill, and 8 of the 10 that directly affected native tribes were to their benefit. But he says the whole process lacked transparency and exemplified a breakdown in the legislative process, since no committees took them up and no hearings were held. And he says these kind of actions threaten all federal lands.

“A lot of reservation lands — our land base is smaller than our traditional home lands, so in many instances a lot of tribal sacred places are held in federal trust in federal parks and things,” Howard explained. “So I think that not only are we concerned about the issue of sacred places on these federal trust lands, but I believe the general public sincerely believes our national parks were created for a reason — to preserve the environment, for future generations to enjoy the beauty that is our landscape.”

Howard says all those lands could be threatened since Congressional action trumps executive steps.

McCain and Flake, both of whom have ties to Rio Tinto, say the mine will provide jobs and economic development to the state. But Arizona Congressman Raul Grijalva has introduced a bill, HR 2811, that would repeal the land swap.

“It stepped all over basic laws, basic rights and more importantly, stepped on sovereignty, ignored sacred sites, when we should be embracing and protecting sacred sites like we protect churches, mosques, synagogues,” Grijalva said, noting that the rider enabling it violated established principles. “At the end of the day, because of you, because of native people across this country, we are going to win this fight.”

Grijalva says the issue is urgent, since Resolution Copper has already started work on the site.

President Obama’s Secretary of the Interior, Sally Jewell, released a statement saying she was “profoundly disappointed” in the land swap, which she said “short-circuits the practice of pursuing meaningful government to government consultation with the 566 federally recognized tribes.” She urged Rio Tinto to forgo development in these sacred areas.

Tribal Chairman Rambler describes how their religion is tied to the land: “It has always been that way. The land, the dirt, the rocks, the trees, the birds, everything. They all have special places in our connection to Creator God.”

The next step is to persuade the Republican chair of a relevant committee, such as Natural Resources, to hold hearings on the bill. And according to Representative Grijalva, pressure is mounting on Congress to take action, including the submission of almost a million petitions collected by Avaaz, MoveOn and Credo calling for Congress to reverse the land swap.