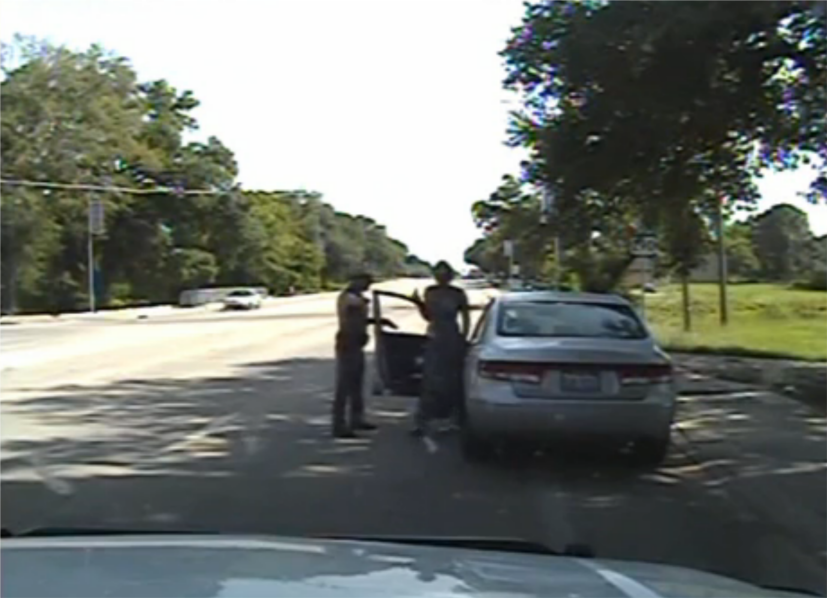 The Texas Department of Safety released a second version of the dashcam video recorded during the controversial July 10th arrest of Sandra Bland, who died three days later in a Waller County jail. The second version of the video seems to resolve anomalies that appeared in the first release. The more information released about how a routine traffic stop in Prairie View, Texas on turned into the end of the life of Sandra Bland the more questions that are raised. Lena Nozizwe reports.

(This story was updated in the Weekly Edition.)

Dashboard video released by the Texas Department of Public Safety of the initial police encounter in the Sandra Bland case shows that the traffic stop starts off routinely enough, but escalates quickly after the state trooper who made the stop asks her to put out her cigarette and step out of her car.

In the process of forcing Bland out of the vehicle the trooper threatens “I will light you up.” Much of the contentious and physical encounter between the presumably white trooper and the black driver is out of the range of the dash cam. But in one exchange, Bland tells the trooper that she has epilepsy. His response is “good.”

Later on in the recording you can hear the trooper on the phone, apparently with a supervisor. At first the trooper says that he and Bland were arguing. He quickly amends that to say that she was argumentative and that he tried to calm her down. In the recording they both sound agitated.

Bland was handcuffed and jailed. That was July 10th. Three days later she was dead.

Police say she hung herself with a trash bag in jail in cell 95. The family does not believe it, and has ordered a private autopsy.

Jinaki Muhammad is an officer of the National Black United Front and has helped organize protests in both Houston and Prairie View. She doesn’t believe it was suicide either.

“A person full of life does not drive 19 hours and to hang themselves,” she says “On her way down to Texas she passed up many trash bags. She passed up many opportunities to kill herself if she had an intent and a mindset to end her life. We don’t trust what is being told to us. We support the family wanting this investigated as a murder.”

At a Tuesday news conference, Texas State Senator Royce West said, after seeing the video of the arrest, he did not think Bland deserved to be jailed.

“We’ve asked the district attorney that as he presents this case to the grand jury that that grand jury be ethnically diverse so no one can turn around and say that no one can say that the grand jury making whatever decision it makes was discriminating,” Royce said, promising that he’ll do everything within his power to make sure the investigation, which is being treated as a homicide, will be transparent.

Waller County, where Bland was arrested, jailed and died has a mixed history when it comes to racial equality. It was once a popular spot for free slaves to live. But in the early 1900s, by law only whites were able to vote. More recently students from the predominantly black university that Bland attended and where she was going to work have fought for voting rights.

According to Bland’s mother, before she left home her daughter said that by going back to Texas she would work to stop racial injustices in the South.

Sharon Cooper, Bland’s sister, admired her activism. She says her sister was never a threat. During a news conference Wednesday she expressed how grateful her family is for the support of social media.

“Please keep tweeting,” she urged. “Keep Facebooking. Keep Instagraming. Keep Snapchating. Keep hashtagging. Keep utilizing the hashtag #justiceforsandy. And my all time favorite #sayhername because the minute your forget her name, you your forget her character … you forget she was a person.”

Initial autopsy results are expected soon. Texas officials will return the 28-year-old’s body to Chicago where funeral services are scheduled for Saturday.