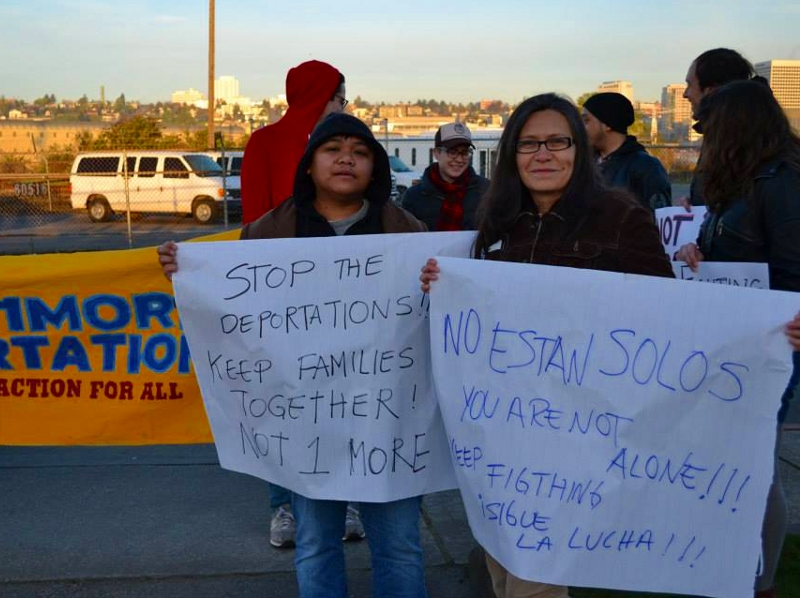 Millions of undocumented immigrants whose children are either US citizens or legal residents continue to wait for the resolution of a court case brought by Texas and 25 other states against President Barack Obama’s executive actions on immigration. The executive actions, which were due to take effect in February, would allow qualifying members of mixed status families to apply for legal residency.

Supporters say the executive actions are common-sense way to keep families together and will ultimately benefit the country financially. Opponents say the measures amount to amnesty and will drain state resources.

While the challenge moves slowly through the federal court system, immigrant advocates say those who would benefit from the programs continue to live at risk of falling into an immigration detention system which can lead to family separation by deportation. Saadia Malik has more.

President Obama’s executive actions on immigration are currently before the Fifth Circuit Court of Appeals in New Orleans, which is examining two issues. First, is the challenge to the president’s authority to expand deferred action against deportation via executive order. Second, is the administration’s request to lift a lower court’s injunction preventing Deferred Action for Parents of Americans or Lawful Permanent Residents – or DAPA – from taking effect in February.

With deferred action wending its way through the courts, the decision of whether or not to detain or deport a DAPA eligible person can come down to the discretion of a single officer.

“The Immigration Customs and Enforcement officers have all the authority in the world to deport you immediately,” says Maru Mora Villalpando, an immigrant rights advocate in Washington state. “And they also have the authority to say, ‘no we actually believe that you should not be deported’ or ‘you don’t have to be in detention in order to continue this process.’”

Mora Villalpando is part of a group that has demonstrated in front of the North West Detention Center in Tacoma and facilitated workshops for people at risk of deportation. She says the immigration policy status quo ultimately benefits the for-profit detention industry.

“In our case here in Tacoma, Washington, we have GEO Group which is an international company running thousands and thousands of beds as they call it, not people,” she notes. “They operate large detention centers and they make money out of having people there waiting while their process continues against them.”

The lawsuit brought by 26 states against the government argues president’s deferred action initiatives violate the constitution. Earlier this year, a federal judge in Texas issued an injunction against the programs, ruling that since they would allow eligible individuals to apply for driver’s licenses, they would burden states with processing and issuance costs.

In oral arguments earlier this month before the Fifth Circuit Court of Appeals in New Orleans, Justice Department attorney Ben Mizer said the reasoning behind the injunction is narrow and inadequate.

“I think it’s remarkable that the entire policy is being enjoined on the mere basis of driver licenses,” argued Mizer. “I do not think that is a strong enough read for Texas to stand on and I think that this is a case that Congress has indicated in the INA that Texas doesn’t have either reviewable grounds to bring or standing to bring.”

Some political analysts believe the legal challenge to deferred action is not so much due to concerns of executive overreach as it is about stalling the measures until a new president takes office.

One factor that led to a rise in deportations over the years was a program that allowed local police to run immigration status checks during routine traffic stops. It’s a practice that first became widespread in Arizona after the state enacted SB 1070, legislation many warned would invite racial profiling.

The lawsuit, says Tia Oso, National Coordinator for the Black Alliance for Just Immigration in Phoenix, “is a political maneuver on the part of the Republicans to squelch the overwhelming success of the immigrant rights movement in pushing for more fair, just and inclusive policies and really raising their voice, coming out of the shadows, being unafraid to demand dignity and respect and demand action on behalf of the United States government.”

When President Obama announced the deferred action programs last November, he predicted Republicans would respond unfavorably, and he called on them to pass a bill to reform the nation’s immigration system. But Mora Villalpando says the kind of legislation Republicans likely have in mind would do little to address the real problems and concerns of undocumented immigrants.

“Even if we had an immigration reform bill, as some Republicans are saying that they are ready to work on, those bills we’ve seen again and again are about detention,” notes Mora Villalpando. “They’re about maintaining enforcement, maintaining corporations, making money out of the militarization of the border, out of making a family detention center, out of expanding the current detention centers, making sure that people are in the pipeline of deportation.”

She adds that DAPA is important, but part of  “the larger fight, which is ending the whole detention system, ending the deportations, then continuing ahead with programs that allow us to be recognized as members of this community.”

It is unclear when the Fifth Circuit Court judges will rule on the administration’s appeal. Both Villalpando and Oso, like many immigrant rights advocates, say the case will likely end up before the Supreme Court.