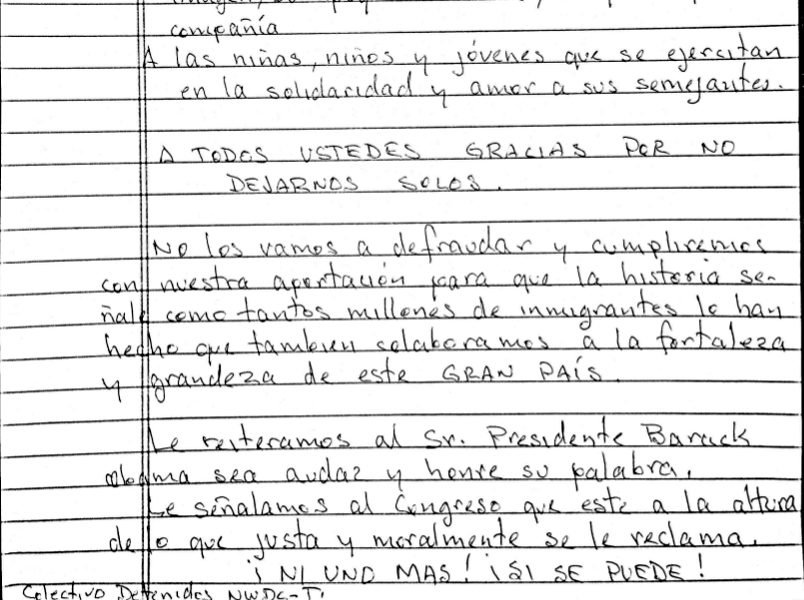 Advocates for immigration reform continue to call for presidential action to halt deportations. Undocumented mothers from around the country came to Washington DC ahead of Mothers’ Day to ask for the expansion of deferred action to keep immigrant and mixed-status families together. Others lobbied congressional representatives to end what is known as the bed quota in the immigration detention system. These actions were held on the heels of a recently concluded hunger strike in an immigrant detention facility in the Pacific Northwest. Shannon Young has more.

Immigration reform activists have been busy in recent weeks keeping their issues not only in the public eye, but also on the agenda of lawmakers. One attention-grabbing tactic involved hungers strikes inside immigration detention centers in Tacoma, Washington and Conroe, Texas. The GEO Group owns both facilities.

On Thursday, U.S. Representative Adam Smith of Washington state introduced the “Accountability in Immigration Detention Act” – legislation that would set enforceable standards for conditions at both public and private facilities.

Seattle-based immigration attorney Angelica Chazaro described the bill as one of the victories of the 56-day hunger strike which concluded May first.

“Detainees until now have really been treated as individuals by ICE, individuals by GEO, and so coming together and having a collective action really made people stop and take notice,” she said in a telephone interview.

Rep. Smith visited the Northwest Detention Center during the hunger strike ahead of introducing his bill. Chazaro says it set an important precedent because, “for congresspeople to be forced to come to the facility in person to talk to detainees; not to talk to to ICE in their offices, not to talk to GEO Group in their offices, but to come to the facility and talk to groups of detained men and women, really just changes how politics is done around immigration detention.”

Proponents of immigration reform point to a line item in the Department of Homeland Security’s budget which requires immigration authorities to be able to maintain at least 34 thousand detainees in custody each night. They call it the bed quota.

Madhu Grewal, policy council at the Detention Watch Network, says ICE’s budget just for detention alone is nearly two billion dollars a year. “Congress needs to do something about the issue of mass detention in this country and it’s not going to be solved simply by asking ICE to fix conditions but really by forcing ICE to lower its detention numbers,” she adds. Members of the organization met with over a dozen Congressional representatives on Wednesday, urging them to end the detention bed mandate.

Representatives Bill Foster and Ted Deutch introduced an amendment last year to eliminate the bed mandate, but it failed to pass. The two are expected to introduce a similar amendment next month if the quota remains in the DHS budget proposal.

Image: Excerpt of a handwritten letter dated May 1, 2014 from detainees at the Northwest Detention Center in Tacoma, announcing the end of their hunger strike.