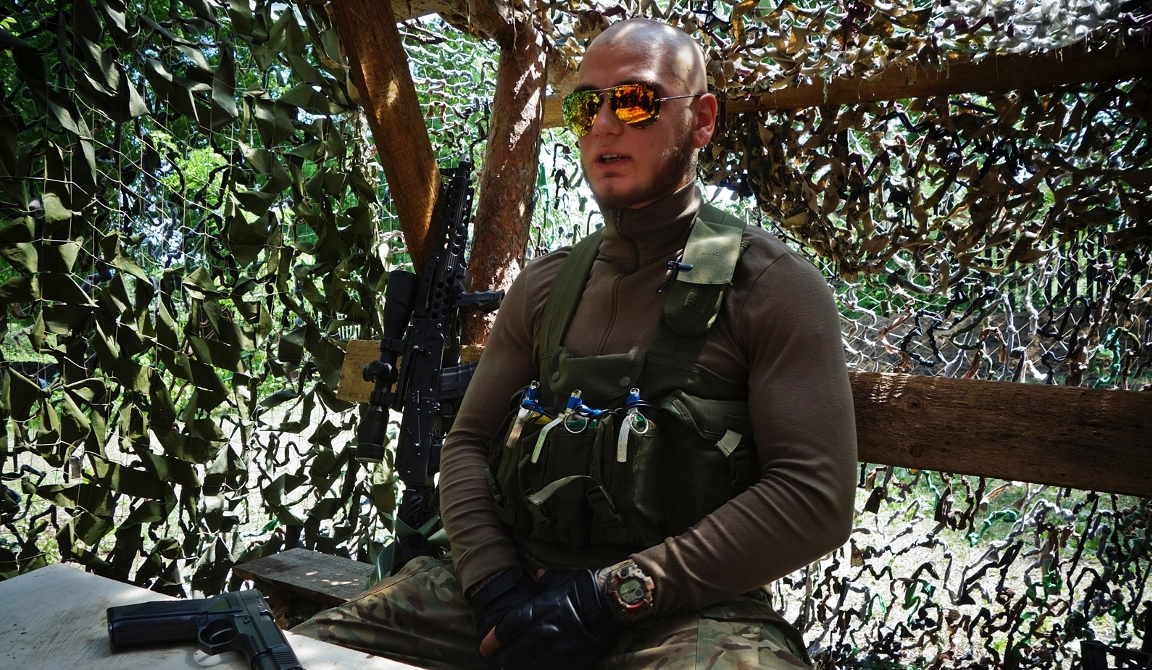 Muzhahi, not his real name, is a Chechen fighter in a volunteer battalion in eastern Ukraine. (Photo credit: Filip Warwick)

On Thursday, the U.S. State Department announced that Assistant Secretary of State  Victoria Nuland will travel to Ukraine next week where she’ll meet with senior government officials. U.S. troops currently provide non-lethal military assistance to Ukrainian troops, and military officials in both countries are discussing a stepped-up training program. Ukrainian President Petro Poroshenko recently signed new amendments to existing laws that will allow international peacekeepers to operate and be stationed in Ukraine. The new law states  foreign troops would function as so-called peacekeepers and security missions would be conducted based on UN or EU resolutions.

But well before the legal framework was in place, many Ukrainian expats and foreign fighters were already active in various Ukrainian volunteer battalions. Filip Warwick reports.

Around 5000 miles east of New York City and 125 miles west from the pro-Russian separatists’ city of Donetsk, Hemingway – a Ukrainian who lived in the United States for ten years – is leaning against a home-made bunk bed. Like most furniture in this base camp, it was built by volunteer fighters.

All of the soldiers fighting in Ukrainian volunteer battalions use nicknames for security reasons. Hemingway says he left Florida in 2014 during the EuroMaidan civil movement which overthrew the government of former president Victor Yanukovych.

“I went to there to support my country, my people,” Hemingway explains. “I went to Maidan, I spent time there, when the war started I decided to come here and do whatever a man has to do.”

Hemingway says he left behind his family and a business in the U.S.:  “It’s a hard decision, not because of business, because of family. This is the most hardest part just to explain to them, for some people it’s easy to explain for some they don’t understand, that was the hardest part.”

The fighters say support for their efforts come from various groups – from local food donations to funds supplied by Ukrainian communities based in Canada, the U.S., and the UK. Housing is free in the form of base camps or commandeered buildings located in various parts of the region.

But not all fighters are motivated by birth ties to Ukraine. When the armed conflict broke out in Spring 2014, many exiled Chechens saw it as an opportunity to take up arms against Russia.

After the break-up of the Soviet Union, Russia waged two brutal wars against separatists in the Muslim-majority region. Muzhahi, a Chechen fighter in one of the volunteer battalions active in Easter Ukraine, says he sees a parallel with what happened in his homeland.

“If people let this go, become indifferent, the same will happen to the region as happened in Chechnya,” Muzhahi predicts. “Russian colonization, which means the destruction of the Ukrainian language and culture and so on, that’s I see things developing. We have come here, I repeat, for the sake of the Ukraine people, not for the generals and higher authorities, so that the Ukrainian people be free.”

While Ukraine is predominantly Christian Orthodox and Chechnya is mostly Muslim, Muzhahi says a shared history of resistance to Russian intervention unites the two regions.

“The Russian Federation is a very big aggressor, over the past 150 years they have been responsible for 38 conflicts,” he continues. “To come to help a neighborly nation, the Ukrainian nation, I have a purpose, for me this is simply not a war, it’s about showing people that some of us are not willing to stand by indifferently when Russia tears Ukraine apart.”

Countries and regions bordering Russia have found themselves at odds with the Kremlin over the centuries; Chechnya being one example and Poland being another. Ukraine and Russia both border Poland, which holds up up NATO’s eastern flank.

Vadim, a Pole,  says he’s fighting in Ukraine because he has a Ukrainian grandfather and sees a similarity between the current situation and the Polish pro-democracy Solidarity movement of the 1980s.

Russian news reports allege Poles make up the largest number of foreign fighters in Ukraine, something Vadim denies: “There are very few fighters from Western Europe, in my battalion I am the only citizen from the West, there are a few Georgians and Russians citizens who are in the process of receiving Ukrainian citizenship. In the Ukrainian Azov Battalion I personally met two Croats but there are no International Brigades or hired fascist mercenaries, this is a fabrication of the Russian propaganda machine.”

Five months ago leaders of France, Russia, Germany and Ukraine met in the Belarus capital to sign a new peace deal known as the Minsk II agreement. The Organization for Security and Co-operation in Europe which oversaw the talks also observed the withdrawal of heavy weapons.

But Vadim and other foreign fighters in Ukraine remain skeptical of the current ceasefire.

“Ukrainian sovereignty was guaranteed and so was Poland’s before the Second World War, and Ukraine had a more recent guarantee in the form of the Budapest Memorandum,” Vadim explains. “The guarantors were the same countries, France, England, but again did not uphold their guarantees. There is no ceasefire here, you have men killed and wounded here; the war continues here. We know who we faced up against; these are not separatists, these are regular Russian units in addition to their gangs who are under orders from Russian officers.”

With some hoping for the war to end soon and recent skirmishes intensifying in front line hot spots, just how much longer these foreign fighters will serve in Ukrainian volunteer battalions is unclear. But what is clear is that Russian intervention in neighboring countries has made enemies for the regional giant in more than just Ukraine.