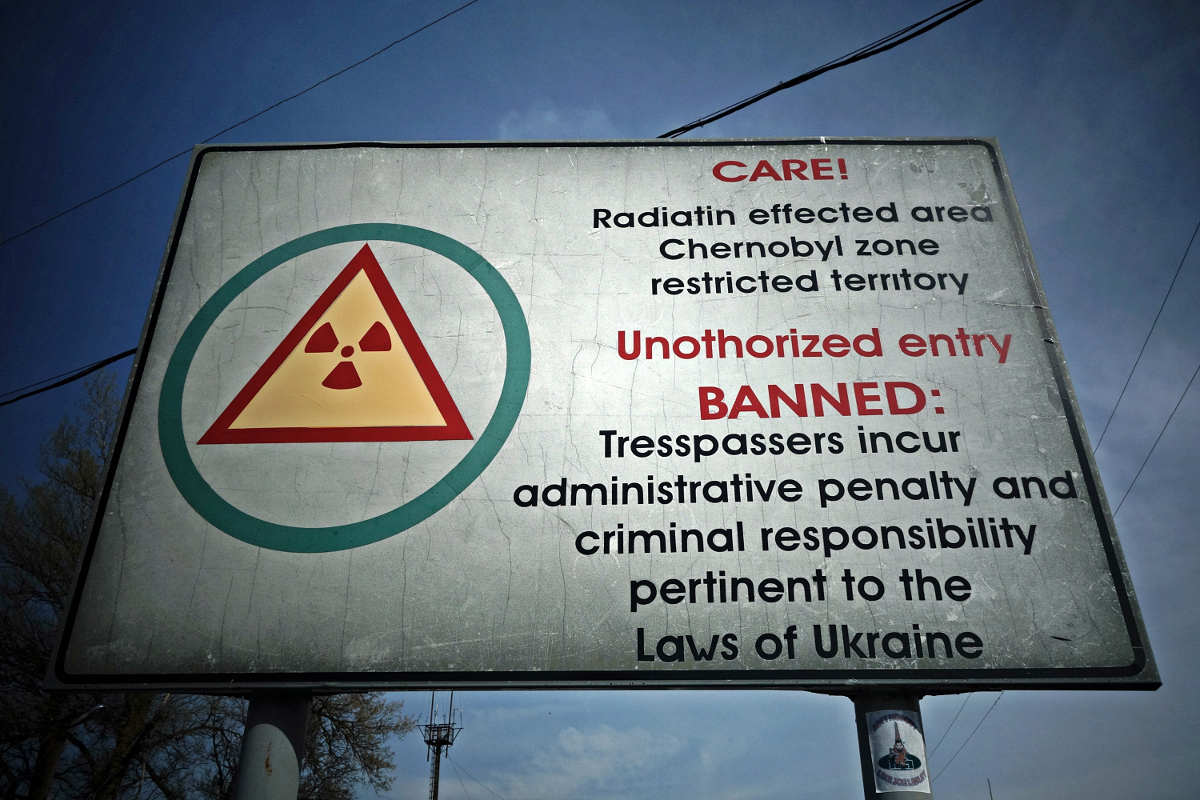 Due to radiation fallout the Chernobyl Exclusion Zone was set up. All towns and villages located within a 20-mile radius of the Chernobyl nuclear plant were evacuated. The zone covers an area of 1,600 square miles and is one of the most contaminated in the world. Weather and wind conditions at the time meant radiation fallout was uneven with various hot spots peppered in the exclusion zone.

Today marks the 30th anniversary of the 1986 Chernobyl disaster, still the world’s worst nuclear accident. An explosion and fire in the Chernobyl 4th reactor released a radiation plume 400 times more radioactive than the Hiroshima bomb. The radioactive cloud drifted over Ukraine, Belarus and Russia as well as large parts of central and western Europe.

According to the World Health Organization, nearly 5000 cases of thyroid cancer have been diagnosed in the former Soviet Republics, especially among those who were children and adolescents at the time of the accident. Some 600,000 people, including emergency personnel and evacuees, were exposed to considerable radiation which could yet result in other forms of cancer as well as other illnesses.

Pripyat is located just a mile-and-a-half from the Chernobyl nuclear power plant. The city was built from scratch in 1970, a Communist utopia designed to demonstrate Soviet achievements in urban architecture and planning. It was known for its high living standards: supermarkets were well stocked and city dwellers had access to Western imports. People came from all over the Soviet Union; places like Moscow, Leningrad and Kiev.

By the April 26, 1986 Pripyat was home to almost 50,000 people. Unaware of what had happened a few hours earlier, residents were getting ready for the weekend. Arkadiy Stepanov was a 27-year-old mathematics teacher at one of the local schools. It was a Saturday, a school day in what was then Russia, and Stepanov made his way to work.

“On my way to school I ran into a friend who worked at the Chernobyl power plant. He says to me, ‘Arkadiy, I don’t understand why there are so many police cars, ambulances and fire trucks in front of the power plant. They gave me a pill and told me to go home.’” Stepanov recalls. “As I continued to make my way to school, I didn’t understand what was going on. It was calm and there were no signs of panic anywhere. The city was oblivious.”

Saturday night, Pripyat youth went to local discotheques. The following morning, life continued as usual. But around noon, everything changed when an announcement on local radio informed the people of Pripyat of a temporary, full evacuation of the city.

By about one o’clock in the afternoon, Stepanov recalls walking outside and seeing hundreds of buses that had arrived to vacate the city: “We walked out with our school colleagues and, as announced, we thought the authorities would evacuate first the children, women and pensioners. But the police just told us all to board the buses there and then. Basically I left with what I had on, my t-shirt and jeans. All my documents and passport were at home. And then the caravan of 1100 buses escorted by police and emergency services left the town.”

Local authorities told the city’s inhabitants they could return within three days. People left their washing on balconies to dry, strollers outside their apartments. They would never return.

Some 400 miles east of Pripyat, Sergei Novikov was studying at the Donetsk police academy, when the order was given for all men to report for duty. Novikov reported to the academy’s conference room, where he says officials delivered the following information.

The young officer volunteered to work at the scene and was later dispatched to the Chernobyl exclusion zone, a 20-mile ring around the Chernobyl reactor where he joined the emergency services, also known as the liquidators.

When Sweden first detected the radioactive cloud, Stockholm asked Moscow for an explanation; Soviet authorities denied any knowledge of the source. Within the Soviet Union, the media was silent and the people were in the dark for three days.

It was only after Swedish media went public that Moscow relented. But when Soviet officials finally issued a statement, it downplayed the serious nature of the incident.

Novikov says people trusted the country’s leadership, a trust misplaced: “It doesn’t matter what lead to the situation, but how the people reacted. We believed that the Soviet Union was built by the people for the people, however we were mistaken. Why? Because the country stops being part of you the moment it starts to deceive you.”

The Kramatorsk museum is located some 400 miles east of Pripyat, and has a whole section dedicated to the Chernobyl disaster. Museum Director Natalia Voloshina explains Soviet attitudes to nuclear energy at the time.

“Nobody really understood the danger of nuclear energy, people didn’t know. What is nuclear radiation? It had no sound, no light, no smell,” says Voloshina. “The first serious casualties were the firemen who came to the scene of the disaster; they were literally burnt by the radiation.”

According to the International Atomic Energy Agency, some 350,000 liquidators, like Novikov, participated in the early stages of the clean-up and received an average total body radiation dose comparable to about 1,000 chest x-rays. That’s five times the maximum dosage allowed for nuclear plant employees.

It’s unclear how many people actually died as a result of the disaster, either in the immediate aftermath or from long-term health effects. Stepanov says a number of his friends and school colleagues died within a few months of the accident.

“A female school colleague of mine who was evacuated, went home the following month to visit her mother in Russia, and during the journey she died on the train,” Stepanov remembers.

The radiation cloud that covered Pripyat and the surrounding areas behaved unpredictably, with wind and weather conditions affecting its movement. While some people suffered mild radiation sickness, other cases, according to researchers, resulted in premature deaths from cancer and other radiation induced illnesses. And radioactive isotopes with half-lives of about 30 years continue to pose health risks from soil contamination in the region.

In 1986 Novikov spent five months as part of the security team in Pripyat. After a moment of reflection, he says a piece of Pripyat remains with all the liquidators. And in the city still a ghost town, many of them only remain in spirit.