All photos by Lena Nozizwe. Hear/read her accompanying report.

Mr. Wilkerson says he does his best to keep his block, not just his living area, clean. Before moving on the street he lived undetected in a boiler room for six months. 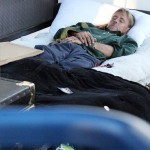 He says he would be “devastated” if his belongings were seized. As it is, Mr. Wilerson says he has endured the theft of his possessions ten times in the last two years. 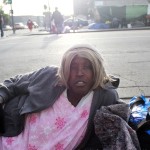 While this woman did not want to be identified, she says she uses her belongings as pillows as she spends nights on Skid Row. Skid Row is home to the largest concentration of homeless men, women and children in the United States. 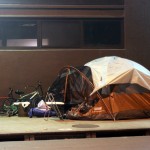 Newly-passed ordinances allow police to summarily seize and destroy bulky items, such as tents located in Skid Row. Los Angeles Mayor Eric Garcetti says he would like to amend the new laws so that they are less harsh. 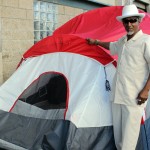 Tents have become popular temporary shelters in the Los Angeles neighborhood of Skid Row. Skid Row veteran known as Dice stands in front of the tent where he sleeps. He believes that confiscating tents will lead to violence.

All photos by Lena Nozizwe. Hear/read her accompanying report.