Until the 1970s the U.S. military used the small island of Culebra in Puerto Rico as a bombing practice site. Culebra is about 16 miles (27 km) east of the main island of Puerto Rico and 11 miles (19 km) west of St. Thomas, the westernmost of the Virgin Islands. Culebra itself is made of an 34-square-mile (88-sq-km)  island and several smaller islets. There is no source of fresh water on Culebra; water has to be piped in from Vieques. In the 1970s, residents – known as Culebritas – and activists from Puerto Rican independence groups protested and the U.S. military relented.

Three decades later the people of Vieques also managed to stop the U.S. military from using their island as a bombing range.

Today, in addition to the natural beauty of Culebra (above and below the water) there is photographic evidence of previous military action and of the struggle against militarism and imperialism through modern street art. 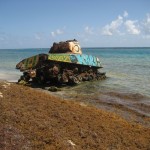 One of the most visible remnants of the era of the U.S. military’s actions in Culebra is this rusting tank on the islands most popular beach, Playa Flamenco. The Culebra artist Jorge Acevedo painted on it as part of La Ruta Del Arte (see photo 9). 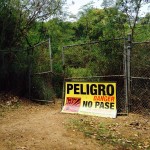 Even though it’s been 40 years since the bombing ended, a legacy from the U.S. bombing remains. Here a sign warns beachgoers to avoid this path to a popular beach. In English and Spanish it warns: “Danger. No Trespassing. Explosives – Unexploded Ordnance.” (Photo credit: Brandi Palmer) 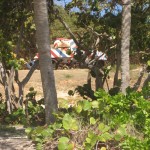 There’s a second abandoned tank just inland from Playa Flamenco. This one is painted by Puerto Rican artist Omar Obdulio. 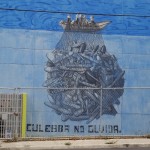 One of the most striking murals of La Ruta Del Arte is in a residential neighborhood on the wall of the Ecological School. It depicts fishers hauling in their catch of missiles, tanks and bombs. Culebra no olvida (does not forget). It’s by the Puerto Rican artist El Basta. 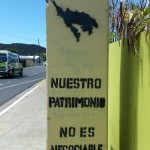 On a utility pole along the main road, someone has stenciled the outline of Culebra and the words “Nuestro patrimonio no es negociable” (Our heritage is non-negotiable). 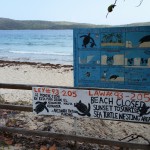 People were not the only ones affected by the U.S. military bombing that ended in the 1970s. Five species of sea turtles use the beaches of Culebra to lay their eggs. There is a roped-off nest in the bottom left of this photograph of Playa Zoni. 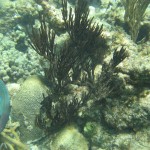 Playa Carlos Rosario is only accessible by a footpath (see photo 2) or by boat. Here a parrotfish swims over several species of coral. 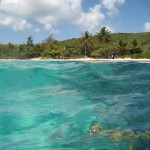 Until the 1970s, parts of Culebra were bombed. The landscape is made up of rocky cliffs, hills, mangrove forests, salty lagoons, harbors and sandy beaches. This is a view of Playa Flamenca (see photo 1) from the water. 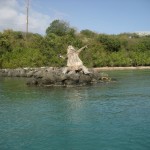 This large sculpture made from old wood pallets greets visitors to Culebra near the ferry terminal. It’s by the artist Thomas Dambo, who was born in Denmark and is the only non Puerto Rican artist taking part in an Art Route project called Culebra es Ley (http://santurceesley.com/culebraesley/). 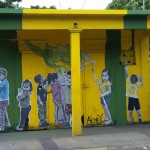 Another stop on the Art Route is a spruced up abandoned bar on the main road of Culebra’s only town. It’s by Puerto Rican artist Abey Cahrron. Yellow and green are the colors of the Culebra flag.