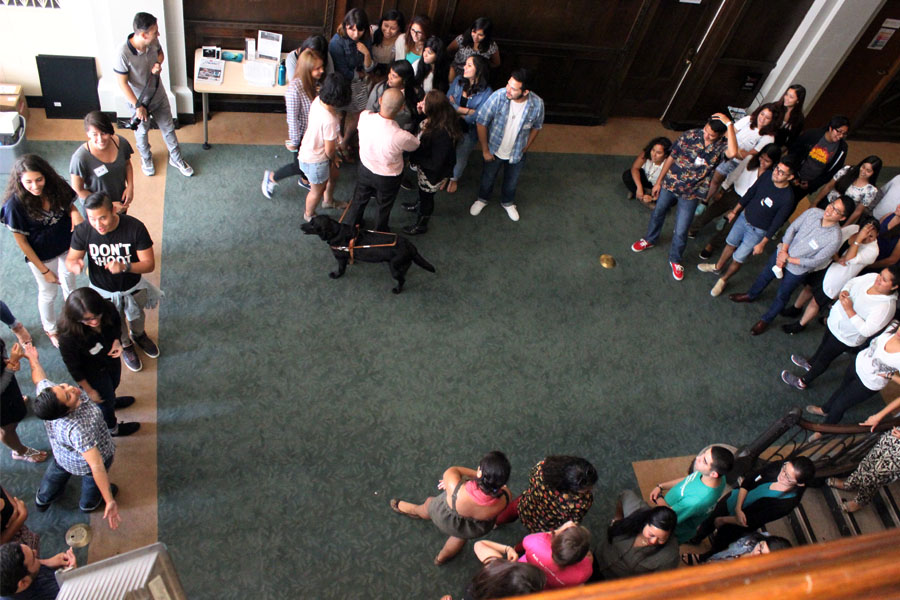 Students across the country are headed back to their classrooms. Many will bring with them stories of how they spent their summer vacation. Dozens, most of them children of undocumented immigrants, will have had the experience of a unique type of program called Dream Summer. FSRN’s Lena Nozizwe reports from Los Angeles.

At a ceremony in the financial district neighborhood of downtown Los Angeles, the applause, cheers and certificates are for graduates of Dream Summer.

The 10-week-long program, sponsored by the UCLA Labor Center, develops emerging immigrant rights movement leaders by pairing them with non-profit organizations throughout the United States.

“The reason why we really target and outreach to undocumented individuals or individuals who are non-U.S. citizens would be because their opportunities are limited,” explains Mayra Yoana Peña, one of the program’s coordinators, who says the arrangement serves a dual purpose. “It’s facilitated a bit more, the opportunities that individuals can have to develop themselves in a professional manner and to begin their career as professionals after college.” More than 400 people applied for Dream Summer’s 83 available spots this year.

Magdalena Vasquez, 21 years old, was among those accepted: “For a while I didn’t know what my citizenship status was, so I wasn’t quite sure. I was kind of scared to ask, too, because I knew my parents would always talk about not having papeles and the importance of them, of having citizenship.”

Vasquez, whose grandparents and parents immigrated from Oaxaca, Mexico for farm work in California, spent part of her summer trying to help eligible farm workers in the state’s Central Valley to sign up for Medi-Cal, a health care program designed for low-income legal residents. Despite having once been a farm worker herself, she found that many were hesitant to speak with her in her new role.

“Some of them were hesitant because they had fear, I guess, because they saw us as outsiders,” Vasquez explains. “And also because we were asking sensitive information. I mean, when you ask somebody who is undocumented if they will reveal to you their immigration status, it’s up to them. And sometimes that fear is internalized and they don’t want to talk about it – to talk about it in a public setting.”

Vasquez understands their reluctance. While she’s a U.S citizen by birth, she’s part of a mixed-status family. Her mother is eligible for Deferred Action for Parental Accountability, or DAPA, a program to grant temporary permission to live and work in the United States to qualifying parents of citizens or legal residents. DAPA was due to take effect in February, but is on hold while a lawsuit challenging the program winds its way through the federal court system. Vasquez’s father is not eligible for DAPA due to a prior deportation.

“It definitely was hard,” Vasquez says tearfully. “And even now we kind of tend to not talk about it in my family, just because it brings up these questions of what does the future hold for my parents, like what are their options. I mean, if DAPA comes through, my mom, she’ll have a little more opportunity… but I don’t know what could happen for my dad.”

The fear of forced separation is a constant source of anxiety for countless mixed-immigration status families.

Manny, from Bangladesh, knows it well. The seventeen-year-old’s surgeon father came to the U.S. legally with a work visa, which has since expired. Manny has temporary legal status through Deferred Action for Childhood Arrivals, or DACA: “DACA is a safety net, but it’s a very thin safety net. Like, if I were to fall – I would go right through. It’s not like the safety net like you have in the circus where they will catch you no matter what. Right? That would be a citizenship.”

Manny calls her status DACAmented but says her father and mother have no safety net at all. “That is just the fear that we have to live in on a day-to-day basis,” Manny says. “Like, there’s nothing that we can do to change it unless we work towards getting better immigration reform.”

Not all of the Dream Summer partner organizations focus on immigrant advocacy. Pedro Navarro interned with Planned Parenthood in San Diego. He spent his time there researching medical services available to undocumented workers. Navarro arrived in the U.S. just a few weeks after his 16th birthday, which makes him ineligible for DACA.

The twenty-six-year-old is concerned that since DACA and DAPA are executive actions a new president could end the programs and dramatically change the lives of millions of immigrants living in the U.S. “It’s a bit scary, it’s a bit discouraging,” Navarro sighs. “But at the same time it gives me more strength to keep fighting and showing that we don’t want any charity, we just want an opportunity. An opportunity to move forward, to be productive and to give back to this country. That’s the only thing that we want — an opportunity to better ourselves and better our communities.”