Brazilian police suspected of killing 19 people in São Paulo suburb, the fourth such massacre in a year 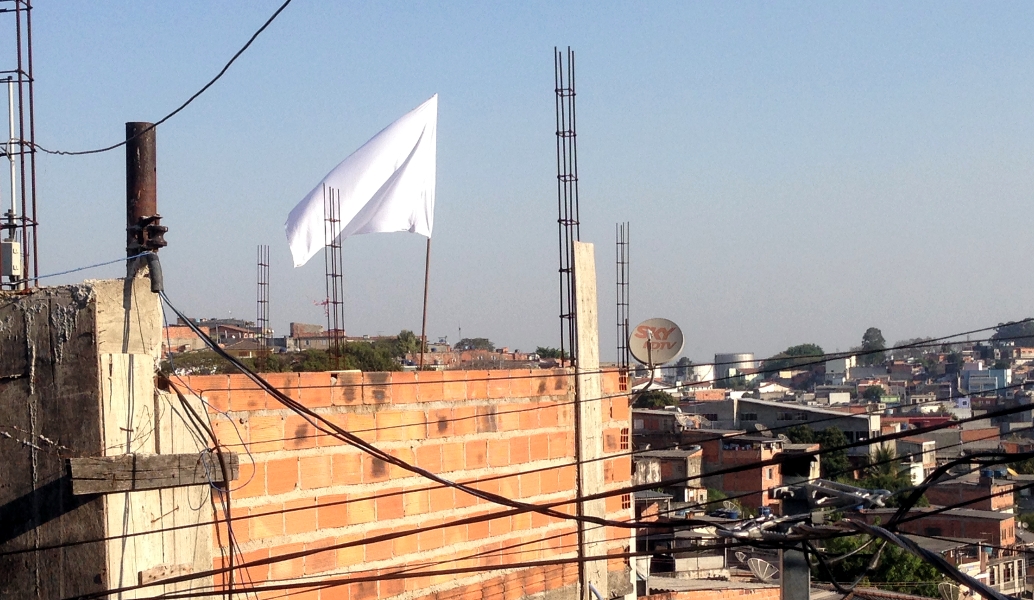 A white flag flies from a rooftop in the Osasco suburb of Sao Paulo. (Photo credit: Sam Cowie)

Off duty police are the prime suspects in taking part one of the bloodiest nights in São Paulo’s history when 19 people were killed in around two hours by masked gunmen. The massacre is a suspected revenge attack for the killings of two colleagues in the region days before, a common trend in Brazil, with at least four similar incidents in the past year. From São Paulo, Sam Cowie reports.

The working class suburb of Osasco – located on the outskirts of the city of São Paulo – is the scene of Brazil’s latest massacre allegedly perpetrated by police.

So far, at least one policeman has been suspended from duty, while 23 are currently under investigation, six for directly taking part in the August 13th killings.

The 19 killings took place in around two hours, in eleven separate locations composed of at least three teams of gunmen. The main hypothesis is that the gunmen were off duty police seeking revenge for an attack that killed two policemen in the area days before.

Thirty-four year-old Juvenal Teixera Sousa is the owner of Juvenal’s bar, where 8 people were killed, including his 19 year-old brother, Thiago.

“They arrived, didn’t ask any questions and just started shooting. Everyone who died here was a worker; no one here killed a policeman or a civil guard,” recalls Teixera.

Analysts say that police often target civilians in gang controlled neighborhoods after their colleagues have been slain, as a show of force to local criminals to discourage further violence against police.

Brazil’s police are among the world’s most violent, killing an average of six people a day while on duty, according to a study by the Brazilian Forum on Public Safety. The number of deaths allegedly at the hands of off-duty officers – as is the case with the Osasco massacre – is harder to document.

“The same sense of impunity that criminals feel, reaches criminal policemen and they feel their can make their own laws.These officers will say, law doesn’t work, so I’ll do my own law. Kill one of colleagues; I’ll do the same with 10 of them, 50 of them, 100 of them. It’s extremely dangerous,” explains Gomes.

Trapped in the middle of this power struggle between gangs and police are innocent civilians, residents of working poor neighborhoods.

Osasco is at least the fourth massacre suspected to have been sparked by a policeman’s killing in the past twelve months. Thirty-five were killed in a weekend in the Amazonian city of Manaus and similar smaller scale killings took place in the Northern city of Belem and Uberlandia in the South East.

Police massacres are a long term problem that Brazil has never resolved, with Rio’s Vigario Geral massacre in 1993 and Sao Paulo’s Crimes of May in 2006 being two of the most famous and bloody cases.

The cases that are prosecuted usually end up falling apart due to weak evidence, intimidated witnesses and police cover ups, as well as slow and inefficient courts.

Bruno Paes Manso, a post-doctoral researcher at the University of São Paulo’s Center for the Study of Violence says that this feeds a cycle of impunity.

“Investigations are badly managed, and there has been for the last 50 years a certain tendency to close ranks and tolerance for crimes committed by police,” says Manso.

And that may be the current direction of the investigation into the Osasco massacre.

In an interview with the local press, São Paulo’s Civil Police spokesperson Marilda Pansonato Pinheiro said she feared that evidence in the Osasco case would be compromised, following lack of cooperation from the military police corp.

As night falls in Osasco, the streets become deserted. Juvenual Teixera Sousa shuts down the “Bar do Juvenal” at 9pm, when he would normally stay open until 2-3am, saying that beyond the trauma of losing his brother and seven friends, the massacre is badly affecting his business.

“Normally the square is full at night. Families, bring their kids here for ice cream. Who’s going to do that now?” Teixera asks.

A white banner reading “Osasco asks for peace” hangs over of a local car wash opposite the bar. But for many families of massacre victims, peace cannot come without justice.