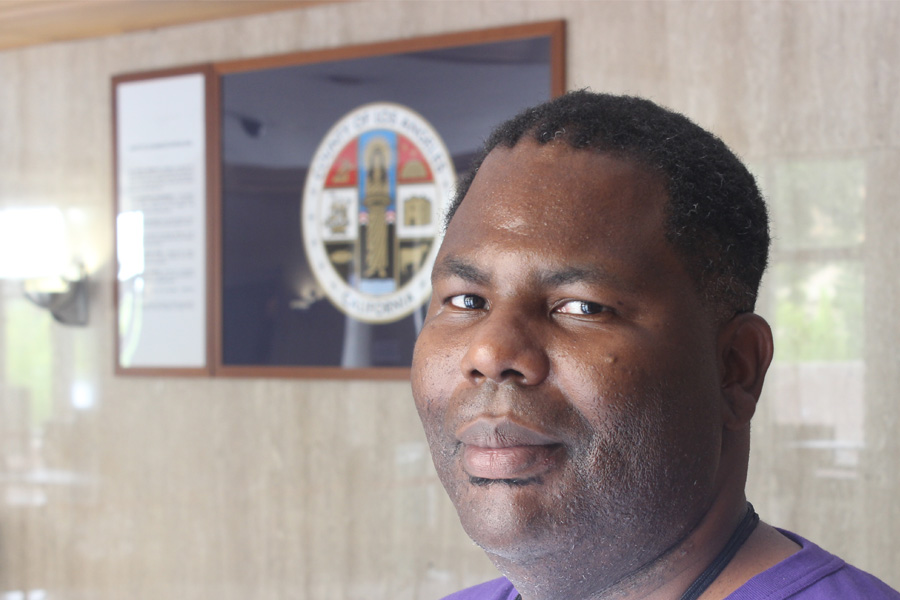 Anthony Coleman, a caregiver, says he works more hours than he is paid for. (Photo Credit: Lena Nozizwe)

California labor activists believe they’ve moved two steps forward with this week’s 3-2 vote by the Los Angeles County Board of Supervisors to raise the minimum wage to $15 an hour by the year 2020—following the lead of the LA City Council’s vote earlier this year.

The county vote came a week after California lawmakers approved a bill that will put more teeth into guarding against wage theft. FSRN’s Lena Nozizwe reports that researchers estimate that wage theft robs employees of more than a billion dollars a year, just in Los Angeles.

For the past ten years, Anthony Coleman has worked as an in-home caregiver, and there have been numerous times that his scheduled hours have not added up to the actual hours he has worked. That includes a current job assignment that involves assisting a client who uses a wheelchair.

“You are supposed to work two hours. How many hours do you actually work?” Lena Nozizwe asks Coleman.

“I actually work four hours for this patient,” he replies.

Coleman has asked his company to schedule – and pay him – for the number of hours actually required to fulfill his duties, but so far no luck.

“There is a fight going back and forth that is really a hassle for her and for me,” says Coleman. He doesn’t have the heart to abandon someone who needs help, even if his employer will not pay him what he is due.

Coleman’s story is just one example of wage theft, defined as not getting paid what you are legally owed in wages or benefits.

The UCLA Labor Center estimates that in Los Angeles low wage workers lose more than $1 billion a year because of wage theft. That makes LA the wage theft capital of the country, according to Tia Koonse, the center’s legal and policy research manager.

“The most common forms of wage theft are failure to pay the minimum wage, failure to pay overtime despite having worked overtime hours, causing your employees to work through or take shortened meal and rest breaks and then illegal deductions,” points out Koonse.

With a bi-partisan boost last week, the bill moved all the way to California governor Jerry Brown’s desk, where it awaits his signature.

Koonse says it will have the most impact on the working poor. She says, nationally, 68 percent of low-wage workers experience at least one of those violations.

“Wage theft occurs at all income levels and it occurs across industries but certainly address a disproportionate threat of wage theft. That is absolutely true. And there are demographic differences as well. So women of color for example experience wage theft more at far greater rates than their white counterparts, than their white male counterparts,” Koonse explains. “Immigrant women are far and away likelier in Los Angeles and across the country to experience a minimum wage violation. So more than 50 percent of immigrant Latinas in LA, whether or not they are documented, makes less than the minimum the minimum wage.”

Samuel Homer-Williams works at major fast food chain restaurant. He says women of color are often pressed to work harder than other employees.

“Sometimes working on their breaks, not getting their breaks at all some make them do the harder labor and I feel they deserve more than that,” says Homer-Williams.

Wage theft awareness is gaining traction as cities and counties around the United States, and even the whole state of New York, are passing laws calling for a $15 an hour minimum.

On Tuesday, the Los Angeles Board of Supervisors voted 3-2 to approve the $15 an hour rate by year 2020 for the unincorporated areas of Los Angeles County. The move follows a wave of municipalities, including the city of Los Angeles, that already approved ordinances to boost the minimum wage.

Koonse says the $15 an hour minimum wage and wage theft are intertwined: “If we are not enforcing the current minimum then what does it mean? How realistic is it that the promise of a higher minimum wage will actually be realized?”

He did not know he had any recourse, until now.