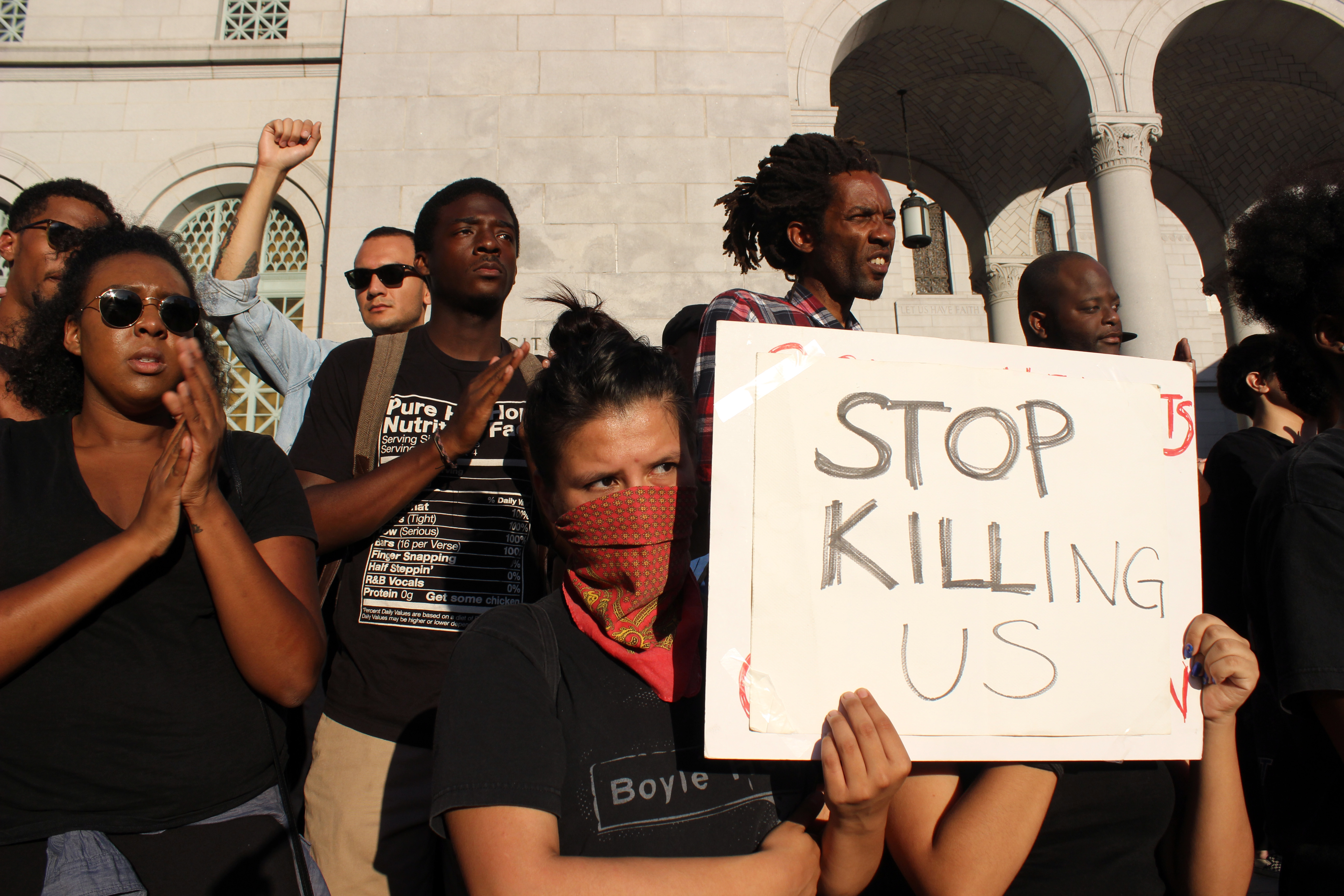 Protesters gather on July 7, 2016 in front of Los Angeles City Hall in one of many police accountability demonstrations in the wake of the police shootings of Alton Sterling and Philando Castile. (Photo credit: Lena Nozizwe)

Jasmine Abdullah finds her footing on a barricade that lines the Los Angeles Police Department’s headquarters in downtown Los Angeles. The compact African-American woman in a bright red dashiki leans in and verbally hurls her anger about police shootings of people of color and members of the LGBT community at the uniformed policemen and women who guard the back entrance to the building.

Fellow protesters place their hands on Abdullah, as if to hold her back so the leader of the Pasadena chapter of Black Lives Matter won’t get arrested – again. Last month, Abdullah was convicted of what until recently was called “felony lynching” -which is defined as attempting to free someone from police custody.

On this day her back is to a crowd of hundreds of fellow protesters as she verbalizes her anger. But a closer look at the 28 year-old’s face finds tears streaming down.

“Because I’m in pain,” Abdullah says, when asked why she is crying. “I’m crying because tired, I’m tired of no preventative actions to save our men and women. I look at my community every day and I see despair, I see anxiety I see depression. And I don’t see anything to help that depression and anxiety. I cry, I feel. And it’s okay to collectively cry together.”

Tears and anger are a common mash up of emotions among protesters.

Dr. Brian H. Williams is a black trauma surgeon at Parkland Memorial Hospital in Dallas who tried to save officers who were shot in the Dallas attack.

“Right now there is this struggle. There is this dichotomy where I am standing with law enforcement, but I also personally feel and understand that angst when you cross the paths of an officer in uniform and you are fearing for your safety. I’ve been there and I understand that.”

Portions of the police shooting incidents were captured on video, exacerbating reaction and enlarging protests.

In the aftermath of the killings, street demonstrations around the country shut down freeways in Los Angeles, Oakland, Wichita, Atlanta, Miami, as well as Baton Rouge and Minneapolis this week.

The Black Lives Matters movement has also been running in the background of global protests – from Ireland to South Africa. And while critics accuse the movement of racism, non-black comrades have been consistent part of demonstrations for police accountability since the police shooting death of Michael Brown almost two years ago.

In fact, organizers of this week’s freeway shut down in Minneapolis described themselves as white and non-black. And whites, Latinos and Asians dominated a protest in Beverly Hills last Saturday that winded past Gucci, Lanvin, Tom Ford and other luxury goods stores on Rodeo Drive.

“This is a human rights issue and that’s what I’m here to show in Beverly Hills,” said one of the organizers, Sennett Devermont, a white man. “I don’t think a lot of people are marching in the streets of Beverly Hills. It’s an affluent area. I think it’s good for people of all communities community to see that people can get together and peacefully demonstrate that they are fed up with police brutality in these different communities.”

Multi-racial solidarity has been evident in unexpected corners as well – like among gang members from the Crips and Bloods, who have come together in cities like Atlanta and Los Angeles to call for peace.

After attending the police memorial in Dallas, President Obama returned to the White House Wednesday and convened a forum on race. Those in attendance included prominent Black Lives Matter organizers, the governor of Louisiana, law enforcement representatives and mayors, including Los Angeles Mayor Eric Garcetti.