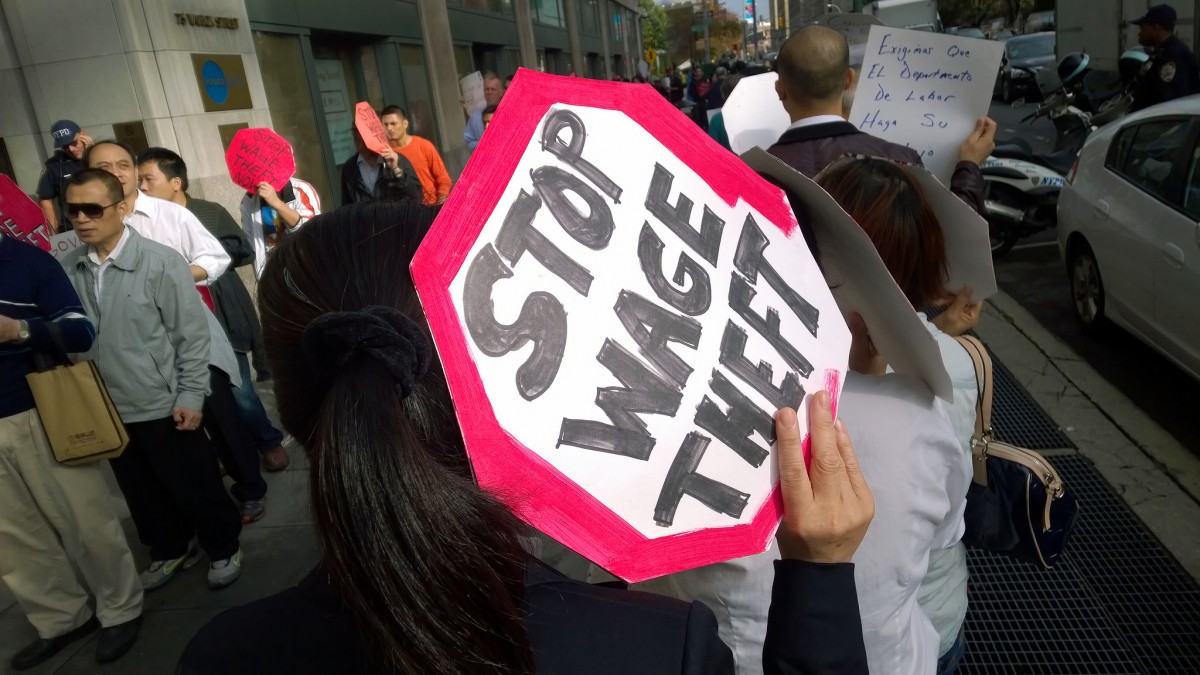 A new wage theft law is due to take effect in California on the first day of 2016, making California the latest state to take legislative action on the issue. California’s Senate Bill 588 will allow regulators to go after the property of employers found guilty of wage theft.

The state of Connecticut enacted a law on October 1st that requires employers who have been shown to have stolen from their workers to pay double the wages owed. A workers rights organization in New Haven is hoping the law will help the many low-wage workers, especially immigrants, who are the most likely to suffer from wage theft. Melinda Tuhus reports.

Connecticut’s Department of Labor recovered over $6 million in stolen wages for more than 3,800 workers last fiscal year, according to the department’s most recent statistics. That was just before a new state law came into effect which could require proven offenders to pay workers double their stolen wages.

Gary Pechie, director of Wage and Workplace Standards for the Connecticut Department of Labor, expects the new law will cut down on wage theft by creating a penalty for violators.

“There’s still always the bad eggs, those bad actors out there that we have to keep an eye on, and just have no intention of complying with the law, and those are the ones paying cash off the books, using undocumented workers, which doesn’t matter to us, but it does when they’re exploiting them, and making them work many hours at less than minimum wage, and paying no overtime, and paying cash, and really treating [them] badly,” Pechie explains. “So, we still have a number of those we’re working on, which is just a travesty in this day and age.”

Pechie’s office has hired three new investigators to pursue wage theft claims. Under the new law, some violators can avoid the double pay penalty if they can show the underpayment was not intentional or they don’t have the ability to pay it. Previously, even multiple offenders faced no penalty.

One employer that has grabbed the attention of both labor officials and local activists is a Mafia-themed Italian eatery in New Haven, called Goodfellas.

The state and federal Departments of Labor found on seven separate occasions the restaurant had cheated workers out of minimum wage, overtime, and/or final paychecks, for a total of more than $40,000. In May 2015, six more former workers sued the restaurant, alleging wage theft, harassment and intimidation.

To draw attention to the allegations, members of Unidad Latina en Accion, the New Haven Workers’ Association, began picketing the restaurant. This led to the arrest of one of the groups leaders in early December – a first in ten years – after New Haven police responded to a noise complaint from a patron.

Organizer Joe Foran noted that, in the past New Haven police chief Dean Esserman, vowed to follow up on complaints of wage theft against the restaurant, but recently crossed a picket line to eat there.

“Why, then, did Chief Esserman two weeks ago arrive for an important meeting to the Goodfellas restaurant, sit down and eat at Goodfellas restaurant, cross right through our picket line and say he didn’t have time to speak to us?” asks Foran. “And then two weeks later, just by coincidence, one of our members was arrested for peacefully assembling the same way we always have.”

A 2009 national survey of 4,500 low-wage workers by the National Employment Law Project revealed that two-thirds of them had experienced at least one pay-related violation in their previous work week. And data from the U.S. Department of Labor shows just how pervasive a problem wage theft is. In fiscal year 2014, 109,000 low-wage workers in areas such as agriculture, healthcare and hospitality were awarded a total of more than $79 million; by far the biggest offenders were restaurants.

Tsedeye Gebreselassie, an attorney with the National Employment Law Project, says filing lawsuits or working through state or federal labor departments can bring results, but both approaches often take years: “That’s why there are, in recent years, a lot of state and local governments that have taken it upon themselves to pass additional laws to try to guard against wage theft, so some laws now in cities across the country that will actually revoke a business license or suspend a business license for businesses that are repeat violators of wage laws as a way to really provide an effective deterrent to wage theft, and there are other localities that make it easier for workers to file claims.”

Repeated calls for comment left for Goodfellas owner Gennaro Iannaccone were not returned.

Law students from the Worker & Immigrant Rights Advocacy Clinic at Yale Law School are representing the six workers currently suing Goodfellas in federal court. They are awaiting a judge’s ruling on the defendant’s’ motion to dismiss their case, and in November participated in mediation talks at the state Commission on Human Rights and Opportunities regarding the workers’ claims of discrimination on the basis of race, national origin, and sexual orientation.

Given the length of time needed to investigate and pursue wage theft claims, the full effect of the new law and its tougher penalty, may not be apparent until the state Department of Labor publishes its statistics for the current fiscal year.