Sand mining: One of the lesser-known environmental impacts of fracking 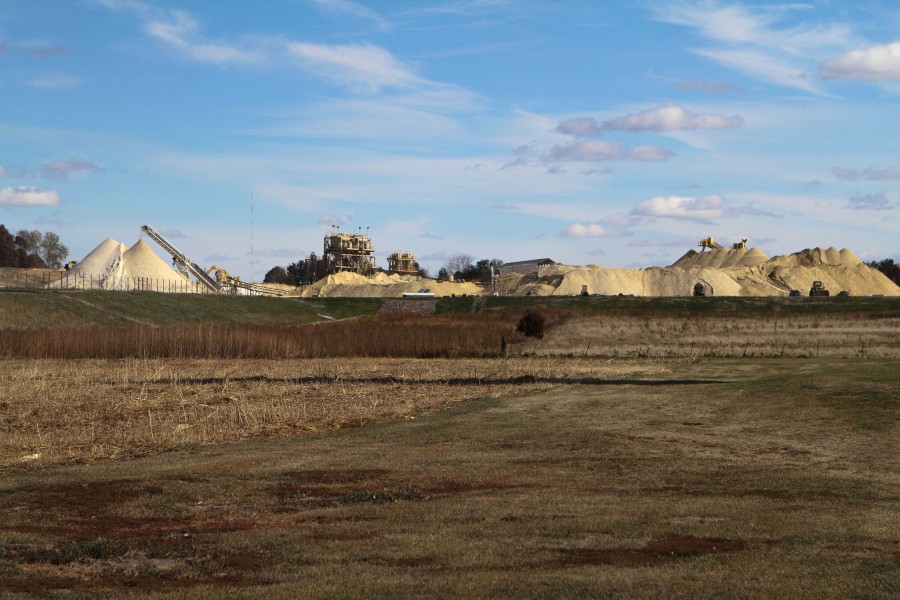 Hydraulic horizontal fracturing, or fracking, is spreading around the country as companies exploit shale rock formations deep under the earth to extract both oil and natural gas. The three ingredients required are vast amounts of water, hundreds of chemicals – some of them carcinogenic or otherwise dangerous – and sand to blast open the fissures to release the gas or oil. This “frac sand” is the least discussed element of the process, but mining for the special kind of sand needed has devastated parts of Wisconsin, Minnesota and Iowa, a region known as the Driftless Area. FSRN’s Melinda Tuhus reports.

The grains of sand needed for fracking are very round and very hard. Bobby King, an organizer with the Minnesota-based Land Stewardship Project, says the Driftless Area – so-called because the glaciers never covered the land – is an area of beautiful bluffs and deep valleys, with some of the best trout fishing in the country, whose economy depends on agriculture and tourism.

“So, in comes frac sand mining, which is basically just strip mining,” says King. “They take off the trees if it’s forested; they blow off the top of the bluff and they begin hauling out sand until the bluff is gone. It’s devastating.”

Sand is made of silica, and King says that’s of great concern to residents, as the mining process causes dust to blow around the area. A build-up of silica dust in the lungs can cause serious health problems.

“Silica causes silicosis, an incurable disease, and long-term exposure to silica dust is what causes that,” explains King. “We have standards at the OSHA level, at the workplace level for workers, but we don’t have right now any enforceable standards for neighbors to frac sand facilities.”

Frac sand mining is most intense in Wisconsin, where a state government controlled by “free market” Republicans has welcomed the industry and offered few environmental or public health safeguards.

One estimate from the Civil Society Institute is that 50 million tons of frac sand were mined in the state in 2013.

“The true action that we have seen from citizens in Wisconsin has been at the local level,” says Stacy Harbaugh of Midwest Environmental Advocates, an organization based in the state capital, Madison. “Citizens are getting together, they’re lobbying their local governments and they’re really paying attention to such things like zoning laws and local regulations on how industry can expand and where they can be located in their areas. People are really coming together in local communities and discussing what they really value in terms of protecting their own property, protecting their water, protecting their air, and really valuing their natural resources.”

Harbaugh says residents would prefer state regulation so local communities don’t have to create their own patchwork.

Activists see the fight against frac sand mining as part of a larger struggle. Bobby King says fracking is part of “the extreme energy extraction that’s devastating to our whole country and the world. You’ve got strip mining for the sand, you’ve got the fracking itself, which is destroying people’s communities and their water. So we’ve created an energy system that’s really harmful to communities, particularly rural communities.”

Midwest Environmental Advocates helped organize Wisconsin residents to petition the state Natural Resources Board to direct the Department of Natural Resources to conduct a strategic analysis of the impacts of frac sand mining and processing, but so far there has been no response.