#OscarsSoWhite takes on lack of diversity in Hollywood 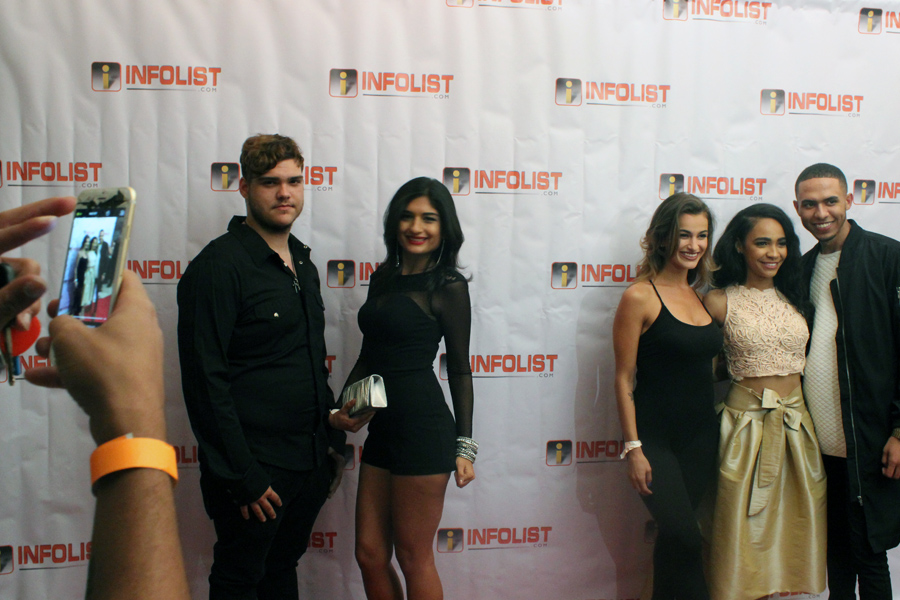 In the wake of hashtags such as #Oscarssowhite and #Oscardiversity Persian actress Layla Dideban (L), shown here on the red carpet at a pre-Oscars party, believes that there are increasing opportunities for actors and actresses who have an "ethnic look." (Photo credit: Lena Nozizwe)

As early as the 1950s, the Hollywood trade publication Variety reported on the lack of diversity in the industry. Judging by the nominees this year, you could copy, paste and publish that article more than 60 years later and it would be just as relevant.

Not a single African American was nominated for an acting award this year, leading to civil rights groups and actors boycotting the Oscar and a ratings drop. And FSRN’s Lena Nozizwe reports that blacks are not alone in feeling constantly excluded from the Hollywood narrative.

Host Chris Rock walked onto the stage to the tune of Fight The Power, and he pulled no punches when it came to addressing the #OscarsSoWhite controversy.

“You realize, if they nominated hosts I wouldn’t even get this job,” Rock told the audience. “This is the wildest, craziest Oscars to ever host. We’ve got all this controversy. No black nominees.”

After the Academy announced nominees in mid-January, the hashtag #Oscarssowhite quickly trended, symbolizing the lack of African-Americans even in the running for the prestigious award. The conversation quickly expanded beyond the black-white divide, spawning more social statements like #Oscarssomale, #Oscardiversity and #Hollywoodbrownout.

The absence of diversity makes for a dull awards show, says movie crew veteran Tema Staig at a pre-Oscars party. The production designer and art director has a long list of television and film credits. But on Sunday she boycotted the awards show. She says she was infuriated by the nominations, or lack thereof.

Staig, a white female, facilitates an online community called Women in Media, comprised of behind-the-scenes Hollywood workers. On Oscar night she encouraged women to watch films by women instead of tuning in to the annual gala event, and share via the hashtag #AltOscarsParty.

More than just a trending hashtag, researchers from the University of California recently documented the white-dominated field, looking at more than 21,000 on-camera characters and real-life behind the scenes crew members in productions released between 2014 and 2015. The study, out last week, found that in 400 movies and television shows there were twice as many male roles as female. Whites more than doubled the number of characters of color, and only two percent identified as LGBTQ.

“I just produced my film, my first feature film under my company last year but I have been producing graduated school in 2002,” explains Cecile Cinco. She identifies as Filipino-American, an ethnic group she says is not well-represented on screen. “My uncle and my dad they are all in the military retired for 20 years of service in the military, but yet when I watch American films with military themes there isn’t a lot of Filipinos in there and also nurses I think everybody knows a lot of Filipinos are nurses.”

Yet Cinco rarely sees Filipinos portraying nurses. In fact, more than half of the content USC researchers studied had no Asian or Asian-Americans at all, and about one-fifth of what they watched included zero African-Americans.

Hollywood vet Tema Staig says that has a profound cultural impact: “Movies are empathy machines. And when you see Morgan Freeman in Mimi Lederer’s film Deep Impact as the president it becomes a possibility. I don’t want to say Barack Obama became president because of Morgan Freeman, by no means. He is a very talented man. He has done great things for our country. However the possibility of just imagining a black man in the White House becomes more possible because we’ve have seen it.”

Fledgling actress Layla Dideban stands on the red carpet at another pre-Oscar event in Hollywood: “I am petite. I would say pretty thin. Size zero. Physically I am ethnically ambiguous I like to say, with long dark hair.” She’s Persian, and says even though she doesn’t fit into the blond haired, blue-eyed starlet stereotype, she’s finding increasing success.

But no Persian has ever won an Oscar for acting. There’s been just one nomination, Shohreh Aghdashloo in 2003. Dideban thinks it is good that awareness has been raised about diversity, but she doesn’t think the Academy of Motion Picture Arts and Sciences has intentionally shut out African-Americans—or any ethnic group for that matter.

Tema Staig thinks it’s more a matter of cronyism. She believes friends vote for friends. But some observers argue that not getting nominated has nothing to do with racism and everything to do with not being good enough. And there’s a hashtag for that too: #actbetter.
1
FSRN asked Staig if one can force a celebration, noting one African-American actor who wondered how to boycott a party you are not invited to.

“Yes,” Stag said. “I think that’s a really good point. Absolutely. I think that the boycott, last year they were down 17 percent viewership that is. There is a danger that the Academy and what they represent, the studio system, is becoming more and more irrelevant because people are being turned off by the same story they are seeing over and over again.”

That story, she says, more than often celebrates white males overcoming adversity. Films like Revenant. Mexican-born Alejandro González Iñárritu did win the Oscar for best director for the film. It was his second in a row. And the USC study shows that when women and underrepresented ethnic groups are in decision-making roles, such as director or showrunner, the number of females and non-whites in those productions goes up.

Staig is optimistic and believes more diversity is ahead, especially behind the scenes, that will envelope women and all people of color—and replace the current Hollywood plot line captured in a recent headline on the cover of an LA weekly paper: it read Whites, Camera, Action.